A Friend’s (Hungover) Guide to SAVOR

*I was fighting a stomach bug during SAVOR in DC and had to pass on the event. My friend and colleague, John Hanna, offered to write this fantastic guest post for PorchDrinking.com. Enjoy!

I was kind of in a sour mood when I first got to SAVOR. No one that I was planning on hanging out with was able to make it and I had an extra ticket that I amazingly couldn’t sell. I also just missed two buses to the metro so I had to walk a mile and a half to the station with my bags only to see the Metro train doors close right in front of me on the platform.

I wasn’t really in a sour (beer) mood but the first couple that I tried happened to be all sours.

So I heard Johnny Cash on the speakers and decided to head over to Yazoo Brewing Company:
“Johnny Cash told me that you have a beer named SUE.”
“Johnny Cash communicates with you?”
“He’s on right now!”

It was the first beer that I really liked that night. I also really enjoyed Snowed In from Copper Kettle and Madagascar from 4 Hands.

Decided to take a breather and get in the cheese line. I had to take a picture after having a bite of St. Mary’s Grass-Fed Gouda from the Caves of Fairbault, Minnesota. The guy behind me said “That must be good if you’re taking a picture of it.” Needless to say it was. 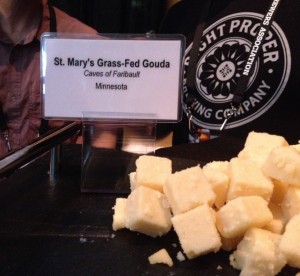 I asked an exasperated Bill Madden from Mad Fox when his Glover Park location was going to open and he said July. Glad to see that he’s finally getting out of the permitting Hell that he told me about at last year’s SAVOR.

Mad Fox didn’t have Orange Whip IPA so I didn’t get to drink one of my favorite beers/Blues Brothers references.

I went to Brewer’s Art and asked for some Choptank’d and some garlic fries. Sadly they did not bring their garlic fries so I settled for a grilled scallop instead.

I ran into Sam Calagione from Dogfish Head and asked him what his favorite beers that he tried tonight were. He said that he really liked Cubano Espresso and Caffè Americano from Cigar City.

Country Boy Brewing from Lexington, Kentucky ran completely out of beer about two hours after the first pour. They were just packing up when I went to have their Barrel-Aged Black Gold Porter which was on my must-try list. It must have been good.

Boulevard Brewing ran out of The Calling IPA so I didn’t get to cross that off my must-try list. Dogfish ran out of Raison Brett’ra too.

Hardywood Park did not have Trickery. They had Foolery instead. Great beer.

I really liked Pocahoptas from Center of the Universe from Ashland, VA. It was by far the hoppiest beer that I had at this year’s SAVOR. It was almost last call so I decided to have it twice to cap off the event. 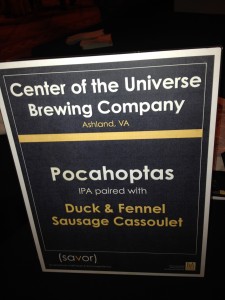 The best beer that I had this week was not at the SAVOR event itself, though. I tried two flights of spicy beer during Bring the Heat at Pizza Paradiso in Dupont Circle on Thursday night. Habanero Sculpin from Ballast Point was by far the spiciest that I tried. It’s not for everybody but I loved it. Abraxas from Perennial Artisan Ales — a remarkably complex Imperial Stout with a 99% rating from Beer Advocate — was the best beer that I’ve had in awhile. I had to force myself to sip it as slowly as possible to take in all of the flavors that were rushing over my palate. I need to find a bottle and listen to this whole album.