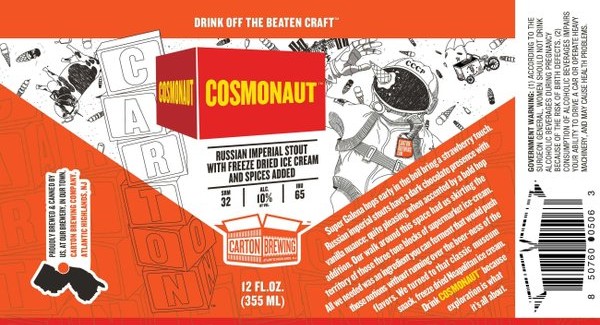 If you’ve ever had a freeze-dried ice cream sandwich, you’d remember flavor that was not overwhelming. More subtle than apparent, the taste of food designed to be consumed in outer space probably peaked your interest for reasons other than edibility. As a child in the 90s, there was an excitement in knowing that somebody COULD go to space, and that THIS would be what they ate.

As an adult in 2016, Carton Brewing Company’s Cosmonaut Russian Imperial Stout has reignited my youthful admiration for exploration. Weighing in at 10% ABV and 65 IBU, Cosmonaut finds the perfect blend of “those three tone blocks of supermarket ice cream” by combining a classic freeze-dried neapolitan ice cream sandwich with a smooth imperial stout.

The beer hits its stride as it warms; the combination of chocolate, vanilla and strawberry becomes more apparent, but never to the point where one would find it overwhelming. This is an imperial stout, and a great one that will keep you coming back. The alcohol content isn’t completely masked, but subdued enough to make this beer borderline dangerous.

Fortunately I was able to grab a four-pack of cans at the brewery before it sold out. The last line of the label description reads: ‘Drink Cosmonaut because exploration is what it’s all about.’

Be it 20 years ago or today, I wholeheartedly agree.