Downtown Monterey, not the famous Cannery Row with the tourist shops and refurbished sardine-packing factories, was in need of a revitalization.

Monterey, California is a beautiful town on the coast about 100 miles south of San Francisco. The most famous area of Monterey is Cannery Row, a refurbished factory district full of tourist gift shops, sea food restaurants and bars. However there has been a recent revitalization of the downtown district of Monterey, led by Alvarado Street Brewery and Grill. Alvarado Street Brewery and Grill, opened by J.C. Hill and his father John Hill, had a plan for downtown. The father and son duo, together with the Head Chef Jeremiah Tydeman, created a brew pub that brings phenomenal food and great beer together to give guests “the ultimate sensory experience.” ASBG should be on your list of breweries to follow, visit and enjoy. Their canned sours are extremely sought after, each release is a huge success. They typically sell out quickly so if you see them on the shelf at your local craft beer store, don’t hesitate. J.C. Hill, the head brewer, was kind enough to speak with me about their newest release called: Super Rad.

Did ASBG brew under a different name or a prior location?

Our brewpub in Monterey opened in May of 2014, and our production facility in Salinas opened in April of 2016. No prior names or locations. I co-founded Amplified Ale Works in San Diego in 2011 with a buddy from college, but am no longer involved in the day to day operation.

Is the sour program relatively new at ASBG?

I wouldn’t consider beers like Super Rad, Boysen, and Haole Punch part of our sour program since they are all kettle sours. Our wood aged sour and wild beer program is in the works, we are branding separately under the moniker “Yeast of Eden” – we expect to start releasing these beers by the middle of next year.

What differentiates a sour from a kettle sour?

This is something that we teach our staff and is part of our education program at the brewpub:

Who heads the sour program at ASBG?

Andrew Rose, who started as an assistant brewer at our brewpub, heads our barrel program. It is a very collaborative process though, and we are just in our infancy. I head up all our clean beers (we consider kettle sours “clean”).

What is the brewing capacity?

In Monterey, we brew on a 10 bbl system with four 10 bbl FV’s. Salinas facility has a three vessel, 20 bbl brewhouse, four 40 bbl FV’s, two 60 bbl FV’s, and a few brite tanks. We’re on track to brew about 1500 bbls this year but we want to grow sustainably and at our own pace.

Any changes for ASBG coming in the next few months?

We’re looking forward to a bunch more can releases of kettle sours and progressive hoppy beers.

Where can you find ASB beer outside the brewpub and taproom?

We self distribute in the Monterey, Santa Cruz, and Bay Area only. No plans to go anywhere else anytime soon.

What are the key ingredients of Super Rad?

Here are the stats of the beer in the description we send out to staff and accounts:
Our wort is soured with five strains of natural, probiotic bacteria that produce pleasantly tart levels of lactic acid. Once the baseline sourness is established, we take the wort through a normal fermentation just like any other beer, and condition this particular one on pineapple puree and dry hop it with tropical Mosaic hops. No other way to describe it than Super Rad! Caution: you may forget your drinking beer.

How much pineapple is used? What parts of the pineapple? ABV?

Suggested Pairing: Salads
Who says a beer and a bowl of greens can’t be a righteous pairing? Vinaigrette-based dressings have acidity, which match the lactic acidity of a kettle sour ale. A lot of salads also have fruit, so when mixed with a fruit forward kettle sour ale, this creates a nice harmony. The other beauty with salads and sour beer pairings is the cheese, which lactic acid and carbonation helps to cut through the richness of certain cheeses (I’m thinking of cambozola as I write this and my mouth is watering).

Is this the first dry hopped kettle sour?

This is the first dry hopped kettle sour we’ve done and the second batch of Super Rad we’ve released.

Is there a predecessor beer this recipe is based off of?

It took us about six attempts to get our kettle souring method down to where it’s super clean and very tart, once we figured that out (and dumped a bunch of prior batches) then we started making the fruit infused kettle sours. The first was Haole Punch, which we brewed at the brewpub in Spring of 2015 I want to say, then Super Rad followed, and then Boysen Back in Town.

Pours pale straw with a slight haze and frothy white head. Nose is intense with pineapple in the forefront and melds with the fruity notes from Mosaic hops. Flavor starts with a bracing acidity that’s clean and mouth puckering, with pineapple flavor to follow and a bright effervescence that finishes dry. No bitterness.

Tell me a bit more about Super Rad?

It’s a fun beer to make, and like the other kettle sours we do, it’s reliant on heavy amounts of fruit, but is carried by the clean lactic profile and needs a big pitch of healthy yeast to ensure a good fermentation.

Who names the beers or how was Super Rad picked?

I personally overuse the word ‘rad’ a lot, and when I suggested Super Rad to Andrew, he referenced a song of the same name by The Aquabats and that was it.

Anything inspire this particular recipe?

Nothing other than wanting a crushable kettle sour ale that employed a dry hop and some fruit.

Where is Super Rad available?

Super Rad is on tap currently at our tasting room in Salinas and our brewpub in Monterey. It will be on draft and in cans at certain bars and restaurants in the Bay Area starting Thursday. 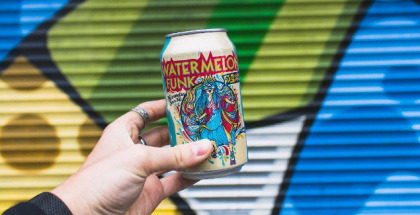 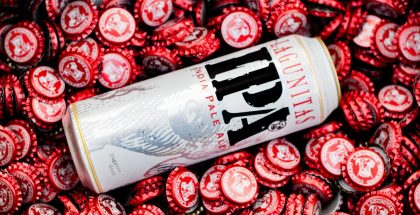