Welcome to Round 3 of the Spotlight! For this installment all eyes are on Horus Aged Ales, a one-man operation out of Oceanside, CA. Kyle Harrop, the mastermind behind Horus, originally established himself in 2015. From there, he progressed it from a humble homebrew operation into what it has become today. Through experimental barrel-aging, unique adjunct additions, and countless collaborations with breweries all over the country, Horus has been able to stand out in one of the most competitive beer regions in the United States. We had the opportunity to pick Kyle’s brain and learn more about the methods and techniques he uses, and gain some further insight into what makes his barrel program successful.

As a bit of background, Kyle’s Horus Aged Ales is what is categorized in the industry as a gypsy brewery. There is a small space in Oceanside where all of the barrel-aging and small batch member society beers are brewed, however Kyle travels all over the country collaborating with other breweries. Over the years he has been hugely successful in creating unique and eye-catching releases that exhibit the best of both Horus and his collaborators. And that’s exactly how he prefers it. The ability to do what he wants in small batches and not feel the pressure of full-production-scale demands is what Horus was built on and continues to have success with.

In addition to this uniquely run operation, it’s always fascinating to hear where brewer’s heads are at when considering how to prioritize barrel types and aging times versus adjuncts in their final product. For Horus, Kyle explained that for him barrels are treated as another adjunct in the process. To elaborate, it’s about finding what works well together and allowing barrel to integrate seamlessly with the influence of adjuncts. Horus is particularly known for using unique and expressive adjuncts in his beers. While he sticks to his guns on some of his favorites such as Geisha Coffee and Hazelnuts, he never ceases to push the envelope on how different additions can influence and compliment the overall profile and complexity of his beers.

“When you put something on a label, people should taste it… but to an extent. I don’t think it should be over the top and fake. And I think that’s the problem with a lot of beers is that they’re just full of extracts and thrown together without a real plan.”

For Kyle and Horus, these beers are largely passion projects; revenue stream takes a backseat to creating a product he can truly be proud of. And he likes to take that extra step wherever possible. Horus has been known to collaborate with bands and musical artists over the years. Most recently this included Los Angeles-based Rock band Spanish Love Songs. For his collaboration with them he elected to take the time and effort to track down exclusively Spanish adjuncts. Canary Island Lava cacao nibs, Canary Island dark chocolate, Sea Island Finca Sanssouci Geisha coffee, and Spanish peanuts were all sourced and added to this incredibly unique Stout offering that served as a very meaningful ode to this band and its name. For Kyle, experiences like these really defines his approach to adjuncts. In addition, they often go hand-in-hand with how he chooses the right direction for aging.

Painstaking adjunct selection is far from the only notable process conducted at Horus. In terms of barrel selection, years of traveling and collaborating has led Kyle to obtain countless rare and exclusive barrels for aging through relationships he’s created for breweries with different brokers. This unexampled means of networking has been invaluable to Horus and the barrel program. It’s allowed for one-of-a-kind opportunities to experiment with some of the best used barrels the industry has to offer.

As far as malt selection, Maris Otter is the choice for all of the higher-gravity beers Horus brews. Its caramel and biscotti-forward profile really helps compliment what these styles offer. In comparison, Kyle noted how it differentiates from what you would find from a standard Two-Row. When fermenting, there is a lot of care taken to ensure it doesn’t all happen too quickly. With such a small operation, techniques such as feeding sugars rather than dumping everything in the whirlpool and just generally “taking care” of the beer in every step of the process is something that isn’t taken for granted.

Being mindful of these small but important steps can make a huge difference in the end product, and Kyle noted the crazy off-flavors that can result from neglecting them. Fermentation is a very particular science with a lot of different ways it can be approached. For Kyle, he made a point to mention Ken Schramm’s Compleat Meadmaker as a huge influence and aid to him when honing in on the best practices for success.

Just like with anything else, the brewing process is full of learned lessons and technicalities. Sometimes it’s related to adjunct sanitation, or even infection in barrels. On the other side of the coin it may just mean keeping to a certain formula for certain things, whether it’s related to aging time, target finishing gravity, or a multitude of other factors.

Horus, like many other breweries, has had experiences with all the above. He specifically gave the example of how prior to aging, his base beer Plato needs to be a few points higher to account for the thinning of liquid in the oak over time. Beyond that, while originally there used to be a more calculated mindset on how long something needed to be in a barrel, he found through his travels that climate and humidity has a huge, uncontrollable say in how beer aging time is affected. Additionally, sweeter, thicker base beers can often stay in oak longer as they continue to mature and take on more influence from the barrel. In short, experience and travel has allowed Horus to rely less on exact formulas for aging and instead trust the palate and adjust from there.

Horus Aged Ales was one of, if not the first, pioneers of the “pastry-style” stouts on the West Coast. Over the years he has continued to adjust and develop his barrel-aged beers in particular into what has grown into an impressive and unique selection. Kyle sent an incredible array of varied beers, and really allowed us to explore a true sense of his experimentation. 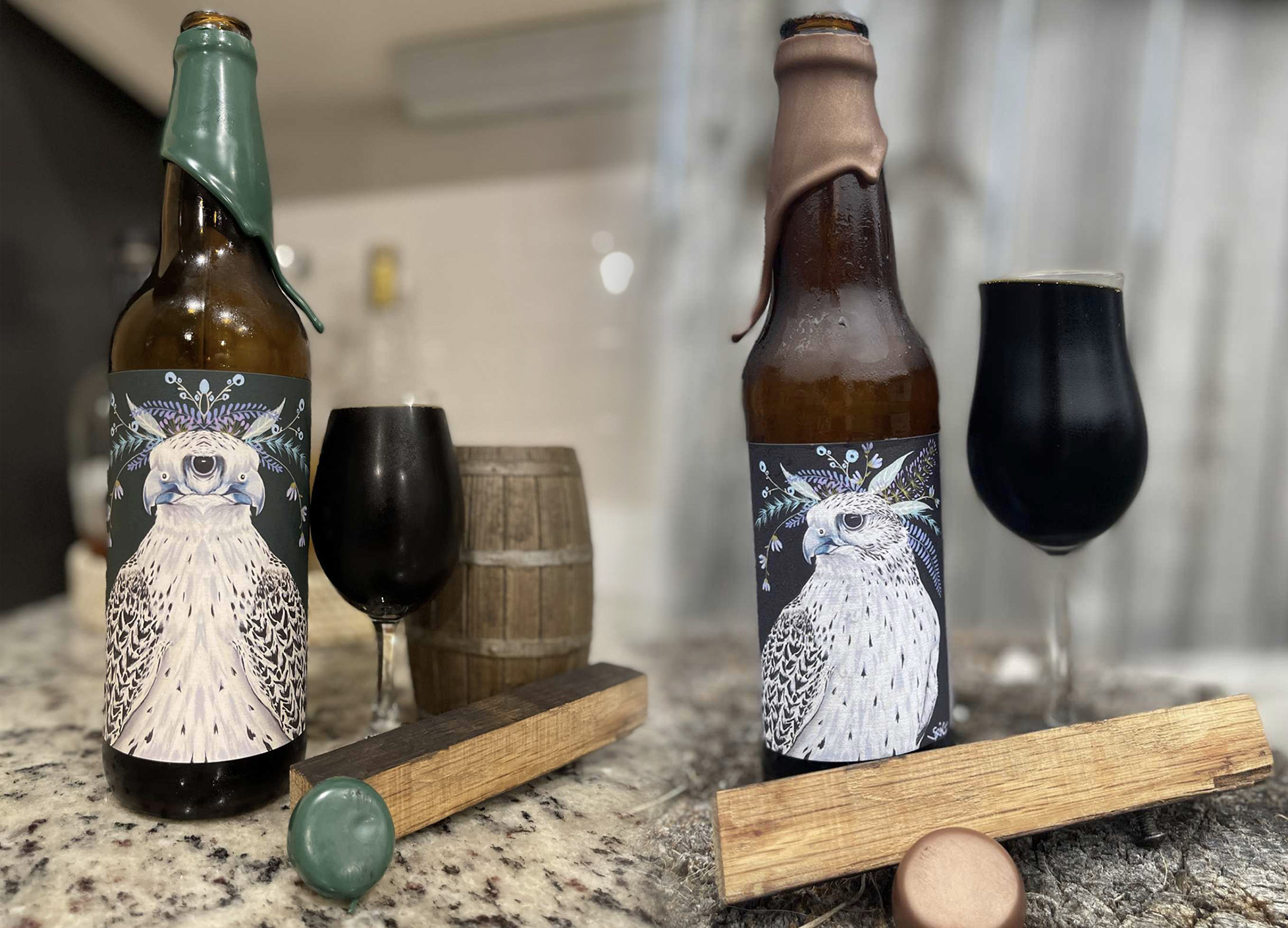 In taking a look at Double Dose² and Dose In Da Wood, we really got great examples of two of Horus’s favorite adjuncts, Geisha coffee and hazelnuts, and how they worked alongside other popular additions. Both had pastry-forward profiles but with the coffee bringing mild bitterness alongside earthy, caramelly notes from the barrel to add complexity and balance. The hazelnut notes were huge and really brought out a Nutella quality when paired with the chocolate. Dose in Da Wood saw a really interesting and complementary adjunct development from its added aging time in the bottle. 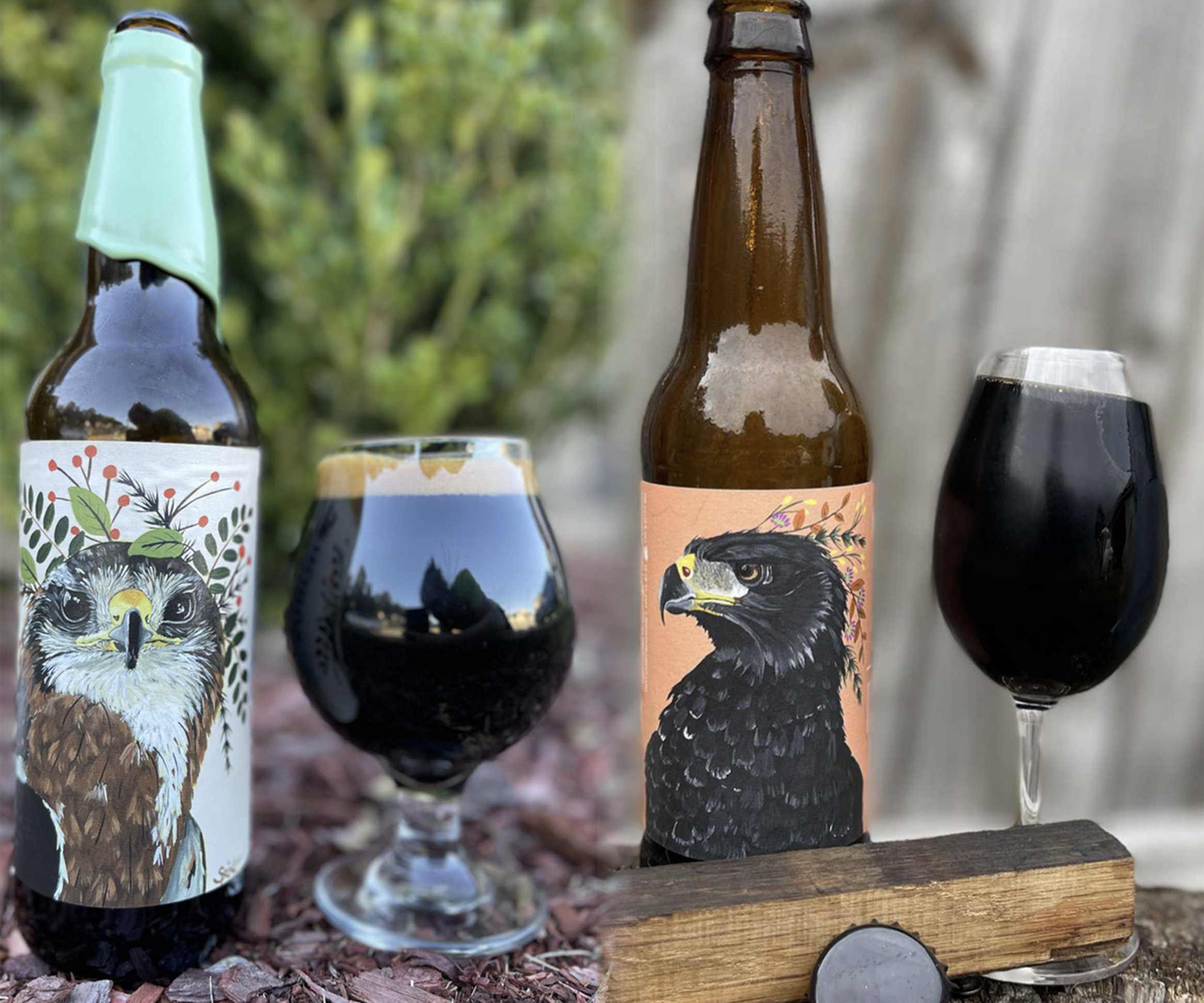 We also explored some really interesting barrel types when tasting Ichor of Osiris and Brazilian Eagle’s Grace. The former being aged in Coconut Rum and the latter in Amburana, we noted how differently each profile was influenced. The Amburana added more savory notes of thyme as well as sweeter notes of gingerbread and bourbon-soaked wood chips. The barrel had faded a bit on Ichor of Osiris but did well to support the adjuncts. That is to say we got brighter fruit flavors, raisin, and sweeter balance to the bitterness imparted by the nuts. 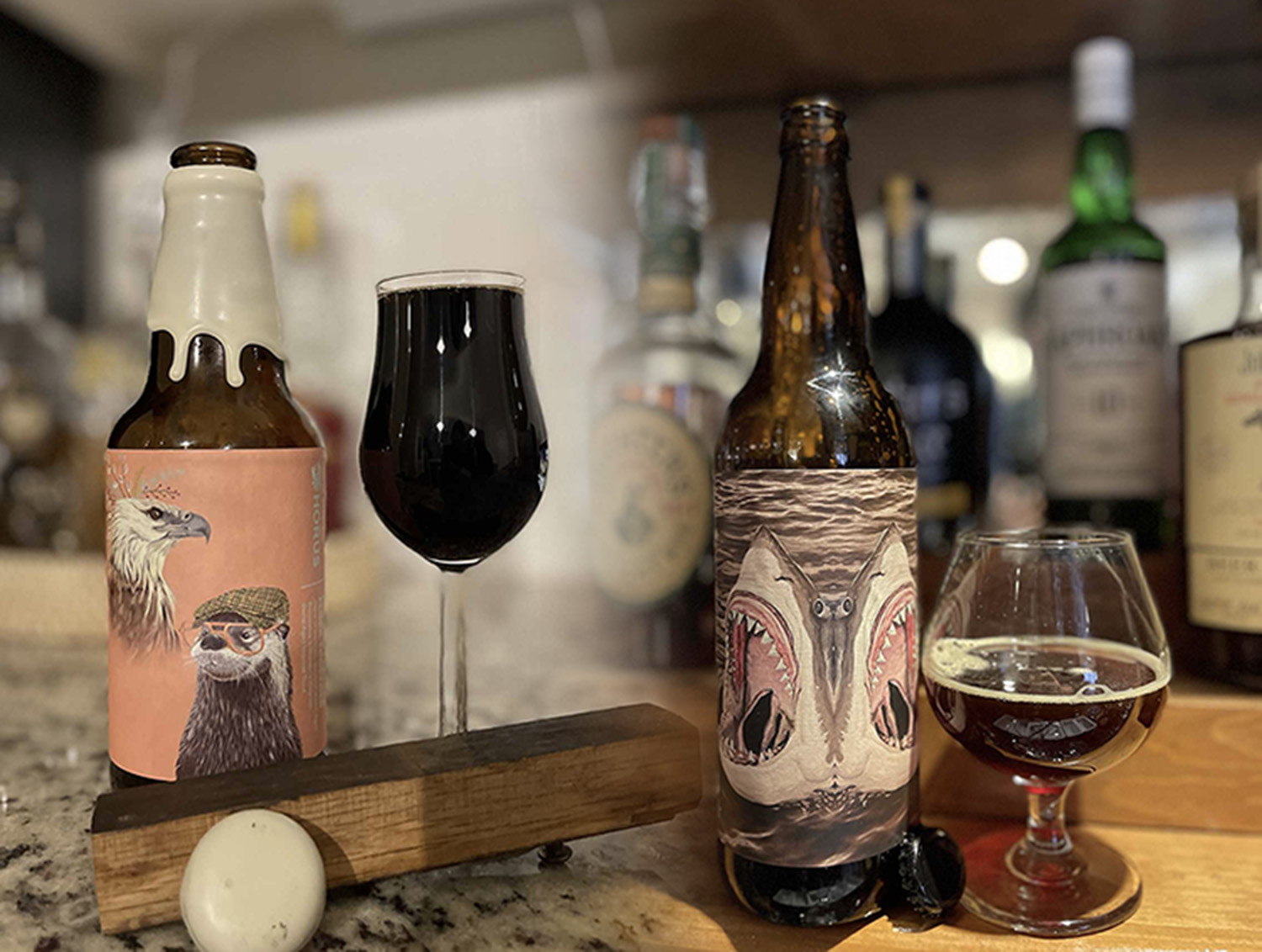 Kyle also sent a couple examples of adjuncted Barleywines and blended Strong Ales, which showed further complexity and development of styles. Sharkeez Sharkeez is a French Oak aged English Barleywine with Hazelnuts and Geisha coffee. It bursted with Hazelnut on the nose to compliment natural dark chocolate notes on the base and a dry, subtle bitterness from the oak. It finished rich, with notes of burnt caramel and Nutella toast. Fur and Feather Flock Together is a blend of Blanton’s barrel-aged Imperial Stout with Blanton’s barrel-aged Barleywine. There was a predominance here of sweet malt and oak on the nose, with notes coffee, fig jam, and smoke. There was a nice complexity throughout that featured a prominence of Barleywine-influenced flavors with a stout-forward texture. A great overall balance of dark fruit, smoke, caramel, and tobacco. 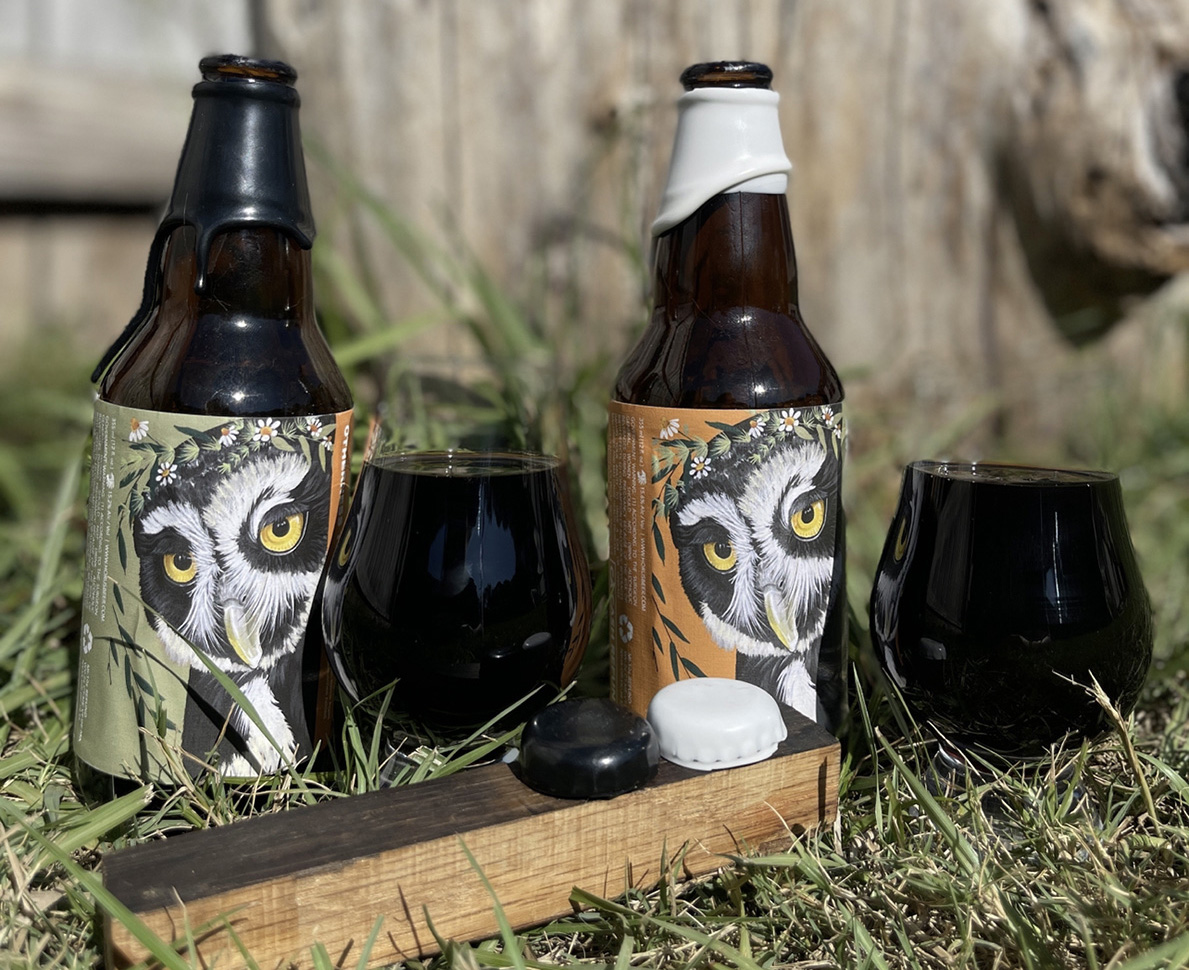 We were thrilled to see both Otherness One and Two sent to us as well, a collaborative effort with Castellum Cellars out of San Diego County. Braggots are a hybrid of mead and beer, a style both seldom brewed and notably difficult to get right. One was aged in a 10 Year Henry McKenna Bourbon Barrel with Boysenberries added. Its Counterpart number Two was aged in a 14 Year Heaven Hill Barrel with Boysenberries. Indicative of the style, both were very sweet and jammy, but not cloying at all. Notes of Boysenberry jam and oaky tannin on both. Overall One brought more jam than Two as well as less barrel influence. Additionally there was a clearer predominance of mixed berries and spiced vanilla. In contrast, Two was more full-bodied and barrel-influenced. To compare, it drank similarly in profile to a Barrel-Aged mead with undertones of caramel and dark chocolate.

With such a large and varied selection of beers to sample, we also wanted to shout out a few in particular that really impressed us. 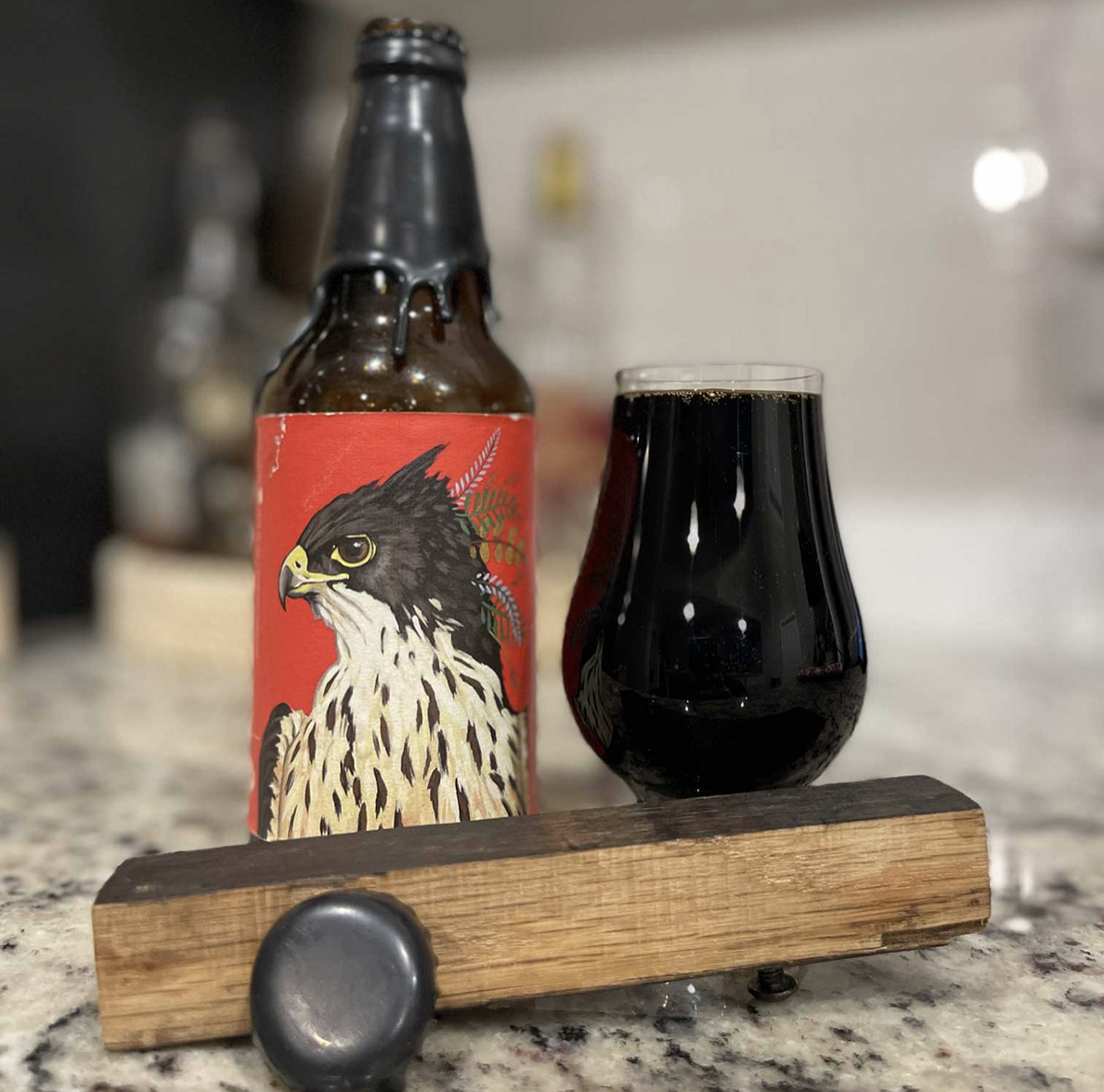 We collectively agreed upon trying this beer that it was our favorite amongst the entire group. It held an elegant simplicity and perfectly embodied both the adjunct and barrel it was aged in. The nose was loaded with vanilla but cut well by a sharp, chocolatey booze. Time in the glass gave an almost s’mores-like similarity, with the base beer so rich in chocolate it became an excellent compliment to both the vanilla and the Stagg barrel. While the richness of chocolate and vanilla hit first, there was a beautiful complimentary finish from the barrels that brought notes of molasses and a touch of tobacco that tailed into the finish. 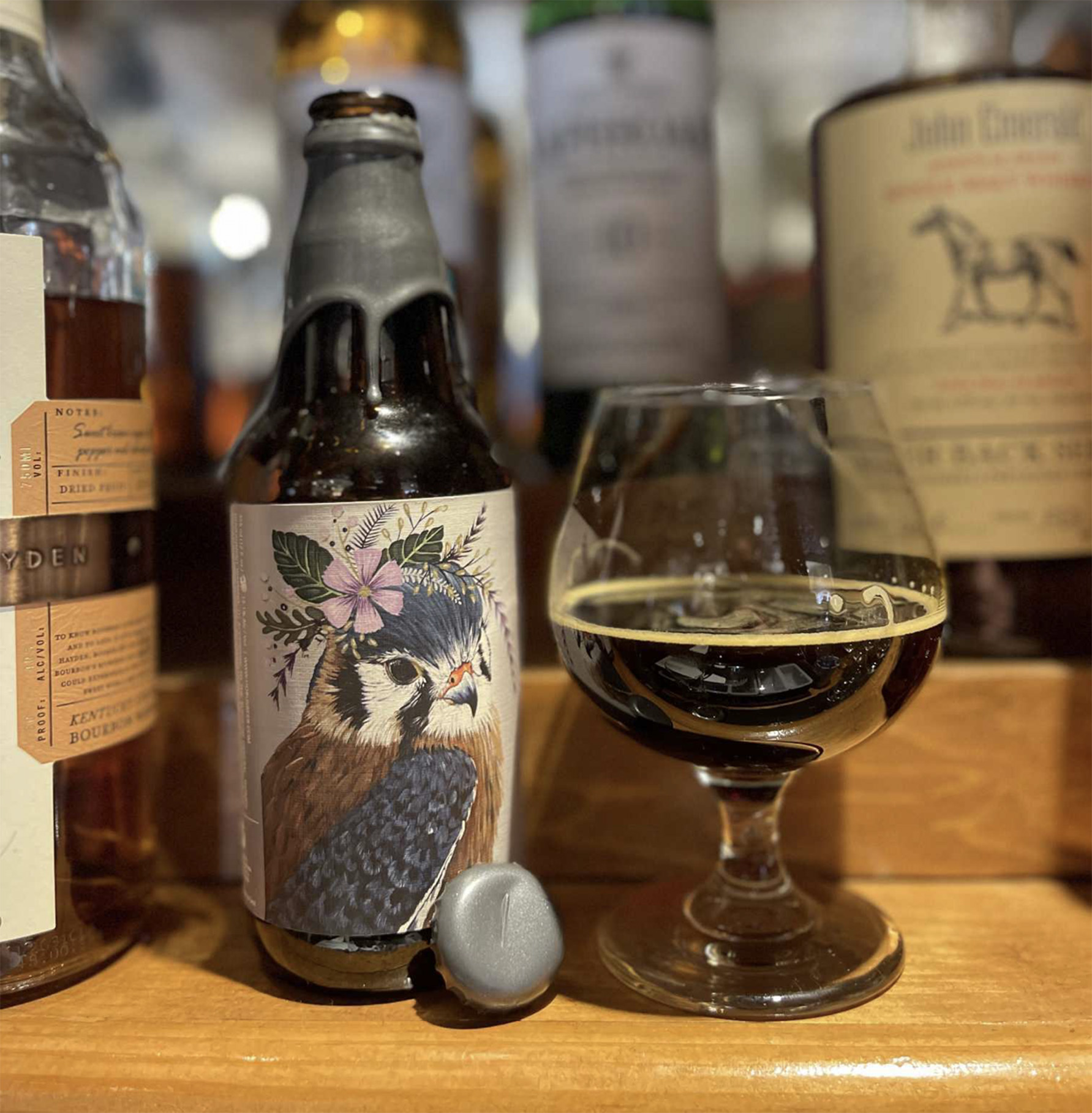 This beer opened with tons of raisin and cherry aromas, balanced in richness by undertones of brown sugar. As it continued to bloom, a nice umami component came with it. This helped compliment the palate with notes of burnt caramel, charred oak, chocolate-covered cherries, vanilla bean, and raisin. The overall complexity to the profile was fantastic, and the smoothness of the 15.1% finishing ABV was exceptional. 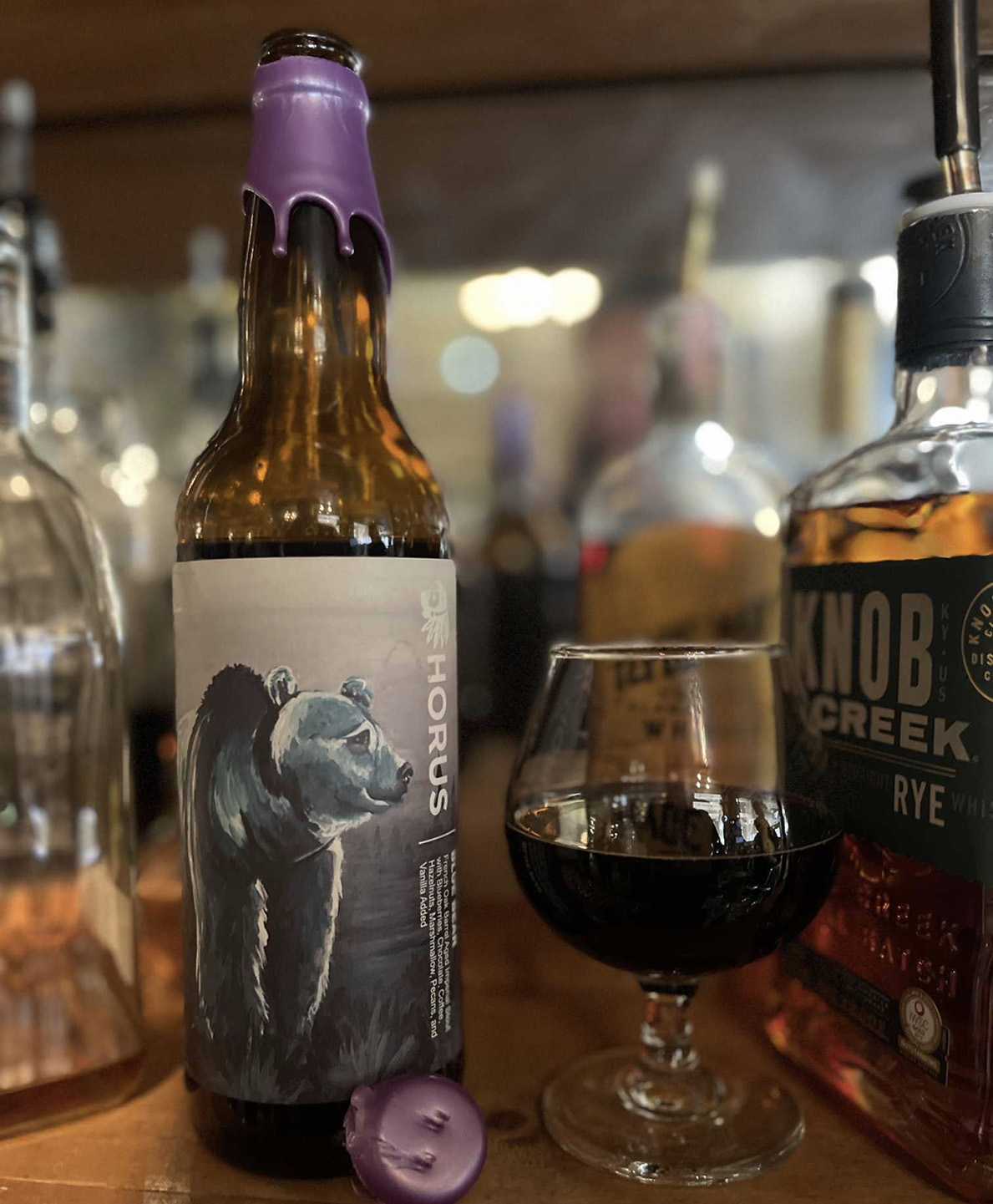 This imperial stout was aged in French Oak barrels and brewed with blueberries, chocolate, coffee, hazelnuts, marshmallow, pecans, and vanilla.

On the nose we immediately were greeted with blueberry muffins; dark chocolate chips, marshmallow, and berry really stood out. On the back end there was a great pecan nuttiness that complimented that familiar drying tannin from the French oak. With time in the glass the coffee began to come through, adding a roasty base and mellowing the richness. Like I noticed with so many other Horus offerings, the smoothness for the ABV was fantastic.

The Flight Toward the Future

As the last few years have definitively proven, the future for brewing is unpredictable. The pricing on adjuncts and supplies continue to skyrocket, and Kyle even mentioned that the cost for one of his favorite adjuncts, Geisha coffee, has doubled and even tripled from previous years. That said, his operation is small, his Convocation Member Society is faithful, supportive, and thriving, and Horus has never lost sight of the future.

It will be very exciting to see what the future holds for Kyle Harrop’s small Oceanside brewery. His product has continued to improve year after year, and we could tell from our time with him he is endlessly eager to learn and improve his craft. Much like the shapeshifting God himself, Horus has proven capable of creating a multitude of different styles and effectively transforming how consumers look at the use of both adjuncts and barrels alike. The God of Light undoubtedly has a bright future.