Beer TopicsFeaturesWomen in Beer
No Comments 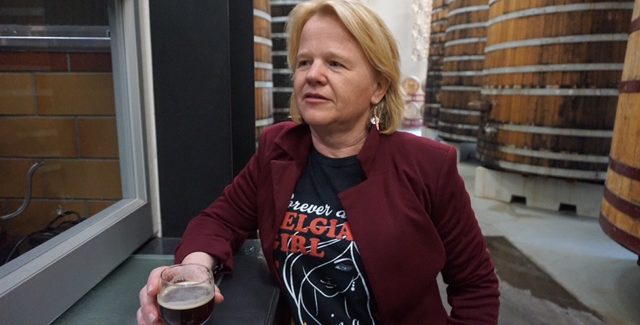 “I was his light in the darkness.”

Frezi Bouckaert smiled slyly as she made the comment. Frezi further noted, “It was dark and I was his shining light.” As Frezi started explaining this rather somber statement, I realized she was speaking both literally and figuratively. Let me give you a little bit of context. Frezi met her husband Peter Bouckaert (yes, that Peter) spelunking in Belgium. When dating, some folks like to go to the movies, see live music or wine and dine; Frezi and Peter would go caving. A lot.

Frezi, just barely over five feet, would weave through even the smallest of cave passageways. With a light mounted on her hard hat, Frezi literally acted as a source of light for Peter. But also, in the grand scheme of life, Frezi was a metaphorical light for the brewmaster, helping him navigate the journey from Rodenbach to New Belgium Brewing.

Just a heads up, this is not an article about Peter Bouckaert, the man, the myth, the legend who brought sour beer to the United States. This is an article about his wife Frezi who supported and ushered her husband along the way; A woman who is another face of the craft beer industry that we don’t often hear about. Though Peter is not the star of this piece, it’s important to understand that he is as much of an influence in Frezi’s narrative as she is in his. Married now for almost 25 years, Frezi and Peter Bouckaert have a love story that’s uniquely their own. But we’ll get to that in a little bit. Let’s continue to get to know Frezi, shall we?

Frezi Bouckaert grew up in Kortrijk, Belgium, a city located in the Flemish province, West Flanders. The middle child among four brothers, Frezi often had to fend for herself in a house full of feisty siblings. She attended boarding school at age 12, relieved that she could finally be among females. In speaking about boarding school, Frezi cringed, saying the experience was grueling with church at 5 a.m. on Tuesdays and Thursdays and the underwhelming promise of fish sticks and fries on Fridays. Often described as someone who cannot stand still, Frezi started bartending at age 16 whenever school was not in session and during holidays.

In 1989 Frezi graduated from university, became a certified financial planner and started working at a bank in Brussels. This was the same year that her spelunking club paired her with Peter. The longest cave excursion that the two ever undertook lasted 26 hours. This experience deepened their relationship as Frezi relayed, “You are reaching your limits. That’s when you know somebody, when that person reaches his limit.” Another time while exploring a new cave, both of Frezi’s lights went out. Looking above and below she saw nothing but darkness. She called out to Peter for help and could only hear him from a distance. He could not get to where she was but helped her continue on by very calmly talking her through it. “The problem is that when you start panicking you start to swell,” said Frezi. “He helped me. He just kept talking.”

On September 12, 1992, Frezi and Peter Bouckert married. It was during this time that Peter was the brewmaster at Rodenbach and Frezi, wanting a job that was more action-oriented, worked in the police force. Reflecting on that time, Frezi noted that Peter was starting to get restless. “Peter is somebody that needs to learn all the time,” said Frezi. “He was still young but you saw him draining. So that’s when we started, with a couple of friends, a brewpub in 1994.”  Only open on weekends so that both Frezi and Peter could keep their day jobs, the brewpub catered to commuters coming in and leaving from the nearby bus stop.

In 1996, Peter spoke at the Craft Brewer’s Conference in Boston. Little did he know, Kim Jordan and Jeff Lebesch had set their eyes on the Belgian brewer, wanting to take New Belgium to the next level. They invited the Bouckaerts to dinner and then made their pitch.

“Jeff was like, ‘I have a new brewery but I’m an electrical engineer. I need a brewmaster,” Frezi reflected. “And Peter was like ‘Good luck. Nobody in Belgium moves.’ We don’t do that.”

Following that dinner the Bouckaerts received more support to take a chance on a start-up brewery in Fort Collins from Darryl Goss, former brewmaster at Cambridge Brewing. He told the Bouckaerts that New Belgium was up-and-coming and that Colorado is a great place to live. This got Frezi thinking.

“Frezi was really the one who was considering New Belgium”

… said Peter. “On our trip from Boston to here, she was pushing to consider, while I was very hesitant until I saw New Belgium.” It was the gentle nudge that would change everything. And for Peter, that nudge brought over 20 years of turning beer into an art form.

For Frezi, the hardest part about the move was that she couldn’t work given her visa status. Instead from 1996 – 1999, Frezi volunteered at the brewery working in nearly all areas including accounting and packaging. “We were only 35 people back then,” said Frezi. “I had a blast but it was so hard for me not being able to take a responsible role.” But then Frezi took on another role that she had yet experienced — motherhood. When Frezi talks about her two teenage boys Wout and Jo, her eyes light up. While the Bouckaert’s caving days are few and far between, their sense of adventure continues to unfold as a family by way of rock climbing, skiing and travel. Frezi and Peter have even brewed a beer to commemorate their eldest son Wout, aptly named Wout Bier. They have yet to brew a beer for Jo (which Jo often reminds them of).

2013 would be yet another milestone as Frezi became a U.S. citizen. On July 15, 2016, Frezi Bouckaert officially became an employee owner at New Belgium. Now, she gives tours and pours beer in the Liquid Center, New Belgium’s tasting room. When asked what employee ownership meant to her, Frezi said it felt like being “part of the family” again.

Between owning a brewpub and being married to Peter, there is no question that Frezi has a very unique perspective about beer. Peter said, “Frezi loves beer and is very opinionated on what she likes or not.” I found this to be especially true when I sat down to chat with Frezi over beer. She loves sour beer but has an utmost disdain for anything brewed with brettanomyces. She is putting her finely tuned palate and knowledge of beer to the test as part of the beer mentor program at New Belgium. This is a six month beer mentor and mentee program that goes in depth on topics like beer history, raw materials, hop process, fermentation and packaging. The completion of this course will be another positive marker on Frezi’s journey. 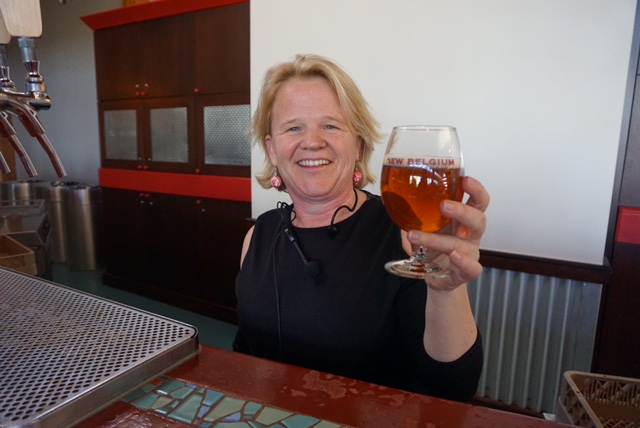 … said Frezi. Looking back she has an abundance of accomplishments: bartender, financial planner, cop, wife and mother but all along the way she loved beer. That love of beer, and Peter of course, remains a consistent thread in Frezi’s story. So, the next time you stop into New Belgium, look for an energetic blonde who stands about tap handle height with an exuberant smile. Ask her for a pint and strike up a conversation with the incomparable Frezi Bouckaert. It will not disappoint.

Editors note: Frezi now splits her time working at New Belgium Brewing and Purpose Brewing & Cellars, a local Fort Collins brewery that she opened up with Peter. Frezi jokes that she’s the only woman in town who is part owner of two Fort Collins breweries.