First, the name of the series comes from the origin of why these collaborations came together. In December of 2016, the five brewers felt many of the causes that they were deeply passionate about were under threat. To combat this, they put their craft beer skills to work and created this series. The series was not meant to be political, but more of a dedication to the protests of hatred and violence. To the founders, naming the series after Russian punk rock protest band Pussy Riot made sense.

For the Makin Noise: A Pussy Riot Beer series, collaborating breweries agree to a theme (e.g. a beer style or ingredient). Then, each brewery puts their own spin on it. Also, each brewery picks a charity they want to donate proceeds to. For Version 1, Goldspot Brewing Company, 3 Freaks Brewery, and Lady Justice Brewing Company, Black Sky Brewing, and Brewability Lab all made their own take of an imperial saison.

Looking back at the past year, the growth has amazed the Makin’ Noise leaders Kelissa Hieber, head brewer at Goldspot Brewing, and Bess Dougherty, head brewer at The Grateful Gnome Brewery. “I love getting the project spreadsheets filled out with the dollar amounts raised from each batch and event and seeing that running total go up,” said Dougherty. In agreement, Hieber shared her joy of seeing how much money is being raised for the vast variety of types of nonprofits across the state.

In addition, Hieber said she witnessed the growth the Makin’ Noise series really take off with the last version. For Version 4, several breweries increased the amount of the brew made to ten-barrels. Thus, more beer made meant a larger donation for charities. Furthermore, breweries outside of the Denver-area have joined, like Westbound & Down Brewing in Idaho Springs.

This weekend, the Makin’ Noise series celebrates its one-year anniversary with release of Version 5, all different types of stouts.

In addition, Woods Boss Brewing will be hosting a one-year anniversary art show where proceeds from artwork sales will go to the Colorado Coalition for the Homeless. Woods Boss still has their Version 4 Ginger Rye Amber on tap.

Moving forward, Dougherty and Hieber are excited for the second year of Makin’ Noise. “For year two I mostly hope to maintain interest from the community in showing up and drinking the beers and willingness to participate with brewing batches from breweries,” stated Dougherty. “This project takes a ton of work that just wouldn’t be worth it if we lose either of those things.” Hieber wants to keep helping organizations all across the state and hopes to see more breweries from the mountains to the borders join in.

In the previous iterations of the Makin’ Noise: A Pussy Riot Beer series Version 2 consisted of all breweries using rye malt in their batch. Next, Version 3 involved everyone using the same yeast strain (Kveik or Norwegian Farmhouse strain). After that, Version 4 brews comprised of herbs and spices.

Finally, check out the full list of the 20 breweries that have participated to date:

If you are interested, you can get a Makin’ Noise t-shirt at http://makinnoisebeer.com/store. 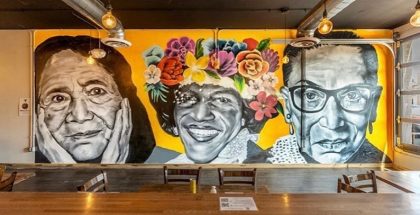