I happened to be scrolling through Instagram pictures and came across Thefullpint account. Its one picture stated “Voted Best NEIPA Brewer” and behind those words was a hazy, delicious-looking NE IPA. At that moment, I started following Narrow Gauge Brewing Company on Instagram.

After viewing multiple tasty-looking beer pictures on social media, I realized that I had to acquire a few of the brewery’s cans. King Fallen Flag. Luckily, within a few days, someone returned my message and now we have this King Fallen NEIPA Showcase.

The King Fallen Imperial NEIPA poured a hazy-yellow orange with an aroma abound in peach, tropical fruit and dank hops. Narrow Gauge brewers double dry hop King Falen Flag with Citra and Mosaic, which provides amazing tastes of big citrus and pineapple upfront, followed by smooth, cream,  tropical-fruit and citrus notes. This beer ends with a good amount of bitterness and tad bit of heat from the booze. King Fallen Flag is an easy drinking NEIPA that will sneak up on you with its 8.60% ABV.

I may be a Pennsylvania beer drinker, but I absolutely enjoyed this beer from Narrow Gauge Brewing Company. It will be awhile before I make it to Missouri, but the brewery has earned a spot on my “To Visit Breweries” list. Until then, I will be trading for some delicious cans of Narrow Gauge.

For more craft beer photos check out my Instagram account (i.p.a135). Cheers to you Narrow Gauge and PorchDrinking!

What to Expect from Surly Brewing’s New Small Batch Series 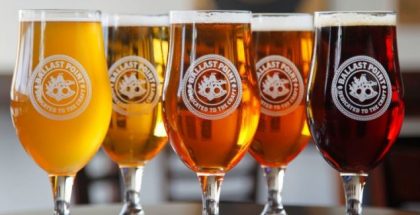