The vast majority of craft brewers take immense pride in every beer they produce, and it shows in the exuberance they demonstrate while discussing their creations to patrons during Illinois Craft Beer Week. Sure, beer releases, festivals, events and tap takeovers during craft week are wrought with stressful, logistical challenges. Nonetheless, whatever might betide, in those moments when a beer fan inquires as to the details of a beer served, sheer joy routinely arises. In fact, all those associated with the brewery exude palpable excitement when presented with an opportunity to speak about their products.

All that hard work. All that cleaning. All that blood and sweat is worth it when it gets boiled down to the very essence of beer making — the beer, itself.

And, if you happen to be one that thoroughly enjoys engaging in conversation with those involved in brewing, from salespersons and brand managers to taproom staff and brewers, Illinois Craft Beer Week offers a satisfying period of events abound in beer geekiness.

The beer offered can range from a slew of beers found in a brewery’s regular rotation to special releases… or the freshest versions of either one, such as what is found at The Hop Review Ultra Fresh Event, with beers no older than five days old. At that event, one could have indulged in a Haymarket Brewing Raspberry Wheat; Kinslahger Zwickel; Lo Rez Barrel-aged Saison; Pollyanna Champagne Breakfast Brut IPA or Noon Whistle Shiz-Nittlebam-Snip-Snap-Snack IPA.

Let’s not forget about Beer Under Glass (“BUG”), too!

Indeed, there are so many themed events held during craft week that it is nearly impossible to describe them all, but the one growing theme consists of the unique beer and the brewers and staffs ready to eagerly, enthusiastically discuss the brews.

That trend will continue this week, including on Tuesday (5/22) and Wednesday (5/23) when PorchDrinking.com in Chicago will co-host events at two bottle shops in the city Beermiscous and BitterPops.

The first invites suburban breweries to show city folks what they brew while the second events mixes new Chicago-area breweries with national headliner-type favorites, such as EPIC, Alaskan Brewing and Cigar City.

In each case, brewers and staff members will be ready to offer its creations to people with the hopes that the patrons care about the process and enjoy the result.

Craft week grants beer drinkers an opportunity to understand (or remember) what makes craft beer so good — the lion’s share of brewers absolutely love what they do; just ask them. 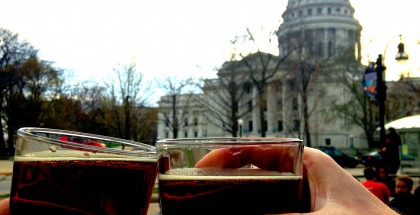