Chances are, the last Revolution Brewing beer you had was probably from their Hero IPA line – or even a Rosa or Pils knowing both are a staple of summer. That might not be the case for much longer. Revolution is diving head first into the sour beer trend with the release of their first-ever sour, Freedom of Speach. The session peach sour gets its tartness via kettle souring and comes in at a sessionable 4.5% ABV, meaning that it will add some variety to any cooler you’re packing this season.

Revolution typically isn’t one to do session beers. They’ve grown their brand through the intensely hoppy Hero IPA series and boozy, barrel-aged Deep Wood lineup. The move to brew a session beer, no less a session sour, raised my eyebrows at first. Then, I took a look around the Chicago beer scene and realized the vast complexities of beers being made across different neighborhoods. Chicago is no longer an IPA or light beer city. Seasoned beer drinkers are looking for both complexity and approachability in their beers, and Freedom of Speach checks both of those boxes.

Revolution says that the new session sour will be on-shelves starting the week of 6/18 and will be available through August. Here’s hoping this is the first of many sours to come from Illinois’ largest independent brewer. I know I’ll be adding this one to my summer beer lineup. Cheers! 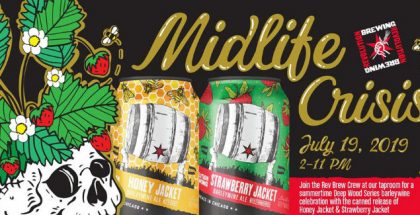