3 Observations from Oktoberfest in Bavaria

Walking through the entry gates of Oktoberfest was like walking into a beer-soaked version of Valhalla. On a sparkling Saturday with warm weather and a faint breeze, I got to experience the best beer event in the world—lederhosen and all.

This year’s Oktoberfest was the biggest one yet. According to Manfred Newrzella, general manager of the Munich Brewers Association, the 2018 version of the fest was the biggest one ever, with each day averaging around 800,000 attendees a day. With that many people, many would expect chaos but my experience at the Bavarian beer fest was anything but. Oktoberfest was a wonderful experience that surpassed my expectations and highlighted why it has been on the bucket list for so many beer drinkers across the world. The event space is massive, yet the grounds are razed every year for other festivals. Each tent takes about $1.8 million to construct every year, and boy do they look awesome shining in the October sun.

Along with the realization that full 1L steins are pretty hefty, I also had a few observations from my experience. Here are my top 3 takeaways.

The importance of tables

There is so much to do at Oktoberfest besides drinking. From trying out new food to riding 100-foot roller coasters (seriously), the festival offers a lot to families and beer drinkers alike. But when you’re ready to drink, there’s one avenue to the promised land: a seat at a table in one of the ground’s 34 tents.

To drink at Oktoberfest, you need to be seated at a table within a tent’s territory. There is no other way to do it and the waitresses are very strict about it. Early on Saturday, I was able to sneak into a seat at the beer garden outside at the Lowenbrau tent, which was very fun as I got to converse with a group of Canadians and an Italian couple who took a 7-hour bus to attend the day’s festivities.

And while any seat is valuable, the seats inside of each tent are the most prized possession, as you have better access to beer, live music and glorious people watching opportunities. I was lucky enough to get a reservation for a table in the Schottenhamel tent, which is the most popular tent on the ground—seating around 10,000. If you’re going with a large group, attempting to reserve a table for half a day should be a priority as it eliminates uncertainty and ensures you get to experience the best beer drinking experience that Oktoberfest can offer.

That said, sitting and drinking at a table is only part of what the flat top can offer. As it gets later in the night and you begin to count the number of steins consumed on two hands, sitting down becomes a remnant of beer’s past. Standing on benches, dancing to a combo of American 80’s rock and Bavarian folk songs becomes the standard, as patrons sway with their table mates upon elevated surfaces. Sure, it might be a bit treacherous, but I surprisingly did not see anyone actually fall off their bench, although some (myself included), got close from time to time as the music ramped up and the beers ran low.

Some thrill-seekers even take the standing thing one step further, declaring a self-chugging challenge by placing one foot on the table. The power stance represents a drinker’s ambitious attempt to down the rest of their full stein and is met by raucous cheers, which quickly turns to jeers (and thrown food) if the drinker fails in their test to down their stein.

The beer is exceptional and a sum of its parts

There’s something refreshing about a traditional festbier. The brewers in Munich have been around for centuries, and yet they don’t stray from the core four ingredients of malt, hops, water and yeast. There are no additives, no lactose, no wild ingredients, or one-off barrel-aged variants found in the beers at Oktoberfest. The creation of each of the six festbiers served is a sacred and rigid process that each of the big six Munich brewers are proud of.

Unexpectedly, the beer is exceptional because of that. The beer is the perfect sum of it’s well-balanced parts. No one ingredient overpowers or overstates itself during the drinking process. The focus remains solely on the festbier, which I appreciated given America’s obsession with the sometimes wild and outlandish concoctions of our favorite craft brewers. The result is a delicious beer that consistently delivers time after time. And while all six beers reside within the festbier category, each is wholly unique, driven by the individual creativity and processes of each historic brewery.

During my day experience, I got to try out the Lowenbrau version in their beer garden and the Spaten festbier in the Schottenhamel. Both were excellent, light and drinkable, yet with enough malt to give it some substance. I found the Lowenbrau version a tad sweeter and lighter while the Paulaner showcased a darker brown hue and roasted notes. Outside of the big tents, I also got to try a few non-Oktoberfest options, including Paulaner’s delicious hefe-weisbeer, which delivered delicate notes of banana and wheat. You could even mix the Hefe with lemonade to create a deliciously refreshing radler—I recommend it.

This would never happen in America

Maybe the best part about Oktoberfest was just how serene the entire experience felt. This is a truly massive spectacle, yet you never feel overwhelmed. Patrons are friendly, bar staff are attentive and everyone has the same joy that comes with wearing lederhosen and drinking from large steins.

All of this got me thinking that an event like Oktoberfest, how it currently exists, would never take place in America. For starters, the brief security check entering the grounds would never happen in the states. Second, I have a feeling that the name, along with the tents, would sell out for ad space if this thing happened in America. It might be cynical, but I can see AB-InBev or a large insurance company licking their chops over the prospect of getting to say “Oktoberfest, presented by XYZ.” And while a stein of crisp festbier is 9 Euro, that is a far cry from what it would cost in the states.

Thankfully, none of that has to happen as Oktoberfest is home in Bavaria and it will always reside there. Oktoberfest has a very familial vibe too; while everyone enjoys the spectacle and the massive beer tents, it’s easy to make very real connections with everyone you meet—especially your table mates, who might come from a different background or country.

There’s something familiar about sitting down at a table and hoisting a glass of beer that crosses borders and brings people together. It’s a global event that celebrates Bavaria and it’s awesome beer. It’s also the perfect picture of what a beer event should be. I’m already trying to learn more of the chants for next year’s festivities. Prost! 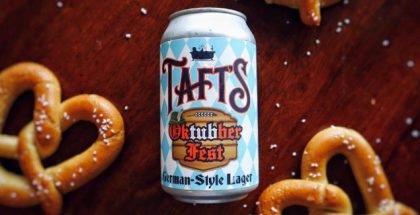