The on-going saga with Michigan’s Founders Brewing continued yesterday when Graci Harkema, who was hired in January to serve as the brewery’s Diversity and Inclusion Director, announced via social media that she had submitted her two weeks notice to resign from the company.

Harkema’s decision comes amid on-going litigation between Tracy Evans, and Founders Brewing around Evans’ claims of systemic racism that lead to his firing. Earlier this week, the Detroit Metro Times first reported leaks from the case’s deposition, where Evan’s former Taproom Manager and co-worker Dominic Ryan, refused to acknowledge that his coworker was indeed a black man.

We had a chance to speak with Graci Harkema about her decision to leave Founders Brewing as well and more around the culture of Founders’ leadership team.

PorchDrinking: Tell me about your decision to leave Founders.

Graci Harkema: All of the exact reasons that lead to my decision to resigning are explicitly stated in my letter. My ultimate decision toward resigning was the direct result of the actions, and or lack of action, that occurred on behalf of Founders this week.

After the deposition was leaked, there was great opportunity at that moment to be able to, as a company, take a stand on not accepting injustices. There was an opportunity to take a stand and open up the conversation about what this color blindness means, and to talk about the importance of seeing somebody for who they are, and the importance of seeing someone for their whole self. There was an opportunity to show empathy and show truly the values in which Founders said they stood upon and instead, the actions of Founders were to negate the entire systemic issue and only focus on winning the lawsuit, which that in its entirety misses the entire point of diversity and inclusion.

PD: When you were originally hired you were well aware of the allegations that Tracy Evans put forth, what ultimately lead to your decision to accept that role, and what did the Founder’s team state that your role was going to be?

GH: I was well aware of the lawsuit and what it implied, in that regard, I knew what I was getting into. The reason why I joined Founders is because of the exact reason why I left Founders. I joined Founders because there was a great opportunity to be able to talk about the real underlying issues and systemic injustices that we’re seeing in our culture and our society. There was an opportunity as a large brewery to stand up finally and to speak up for what is truth and right, and to speak up for what is equality. We have a global footprint, so we had a chance to be able to be that leader in that space. I took that role because there was an incredible opportunity that could have been a game-changer for Founders in the craft beer industry.

When I was hired, we had mapped out very specific measurable steps around how we could achieve that as a brewery, not only for Founders, but also working with other breweries as well. This wasn’t just about Founders, it’s about our culture and where we are in this greater society

What was told to me, and what I believed had been implemented, was that I would lead the Diversity and Inclusion practices on behalf of the company as it pertains to our business model. That had initially been put in place and I did have an active say and an active voice until we had this turn of events with depositions being leaked out.

Founders more than ever, could have taken that opportunity to also make a stand, to stand up to say “we understand what is being said in the deposition, we understand how this is being perceived.” We could have said that this was not a fair assessment, that this is somebody who was coached to answer questions in a certain way, which didn’t allow him to truly express his authenticity and truly express, that Dominic Ryan was coming from a non-racist place. Founders could have then addressed what colorblindness means and the importance of seeing someone for their whole self and the importance of seeing someone in their ethnicity, and understanding that we all have different journeys and experiences that we’ve gone through, to be able to say I see you.

That could have been a gamechanger in this whole situation. That would have boosted morale and taken responsibility as a large company to say, we stand for equity and we stand for equity. But instead of doing that in which I had suggested we do, the company’s stance was to be focused on defending the deposition. And focused on stating that Founders expects to win the lawsuit.

Then as you followed in media the consequential actions after that, there silence from Founders, not only to the community, but also to Founders’ own employees who are on the front line having to defend what was going on. Me having to be true to myself and knowing what is right and what is not right and having to stand up for my integrity and my morals, and that the actions that were exemplified, were not aligned with inclusive practices, not aligned with authenticity, that is what lead to my resignation.

PD: Did you receive any public pressure when you first accepted this role?

GH: Yes, I received backlash, and pressure in a negative sense almost every single day. And I talk about that in my resignation letter, but I couple that with, I knew what I signed up for, I knew I was going to get backlash, and I still… I believe in this work and I believed in the vision of the leadership team at that time when they had hired me and that’s why I continued on anyway. I would have still continued on if I was standing up for what I believe in, but when my morals are no longer being met and when my integrity is on the line, I can’t stand up for something I don’t believe in and something that’s against my morals.

GH: There were other instances where my direct feedback and suggestions were not being heard. However, I still stayed in the role after that because I believed in continuing the work for the greater of the company and our culture but after that had happened repeatedly this week over such a major topic in society, I couldn’t stand for that.

PD: What is the general sense among the other employees of Founders around this situation?

GH: This is not a staff issue, this is a leadership issue, this is an issue from the decision-makers at the top. The staff of Founders as a whole, it is a great team, and as a whole, they do believe in inclusion and moving forward in progressing in equity. But if that’s not cascaded from the decision-makers that are directing the exact impact that we’re seeing on underrepresented and marginalized groups in the community, it doesn’t matter. You can have the best staff in the world, but if the leadership is not in line with inclusive values, it’s going to steer the company in the wrong direction.

PD: In light of what you have witnessed and all that you have been a part of, do you feel there is a culture of racism among the leadership team at Founders?

GH: I do not think there is a culture of racism among the leadership team at Founders, but I also think that there are aspects of lack of awareness and lack of open-mindedness to understand the journey and lives of other people.

PD: Where do you feel like the disconnect comes from?

GH: I don’t know, I can’t speak to that because I haven’t been in someone else’s shoes their whole life. But I think if someone, no matter who they are, if they have not been exposed to a variety of experiences and narratives and impact from others, if you haven’t been exposed to that, then all you know is your own journey, and it’s easy for one to get caught up in only getting caught up in their own journey instead of seeing what’s happening around them.

PD: Do you feel the leadership team has made any effort to authentically connect with the Detroit community, one that is comprised 80% of people of color?

GH: Founders has made impacts specifically in people of color and LGBTQ communities in Detroit. Our impact in those communities has been in conjunction with my arrival to Founders and we wanted those relationships with various organizations to be genuine and authentic. So there was not much to be seen from those relationships from social media, because those relationships weren’t for social media’s sake, they were for authenticity’s sake. However, our explicit actions in negating the true societal problems and our neglect to take a stance, severed those community relationships almost immediately. It’s unfortunate because it takes a lot of work to build trust, but it takes a few actions to tear down that trust and that’s what happened.

PD: Is there anything else you would like to share about your time at Founders or this instance in particular”

GH: I’ve received a lot of social media commentary about this and there have been several people that said they were sorry that this didn’t work out. The one thing I do want to make clear is that I am proud of my time at Founders and I’m proud of the work I accomplished at Founders And if I had to do it all over again, I would because I believed in it every moment I was there. But when things changed, that was my time to put in my notice. But I am definitely not sorry for working there.

Below is the resignation letter from Graci Harkema: 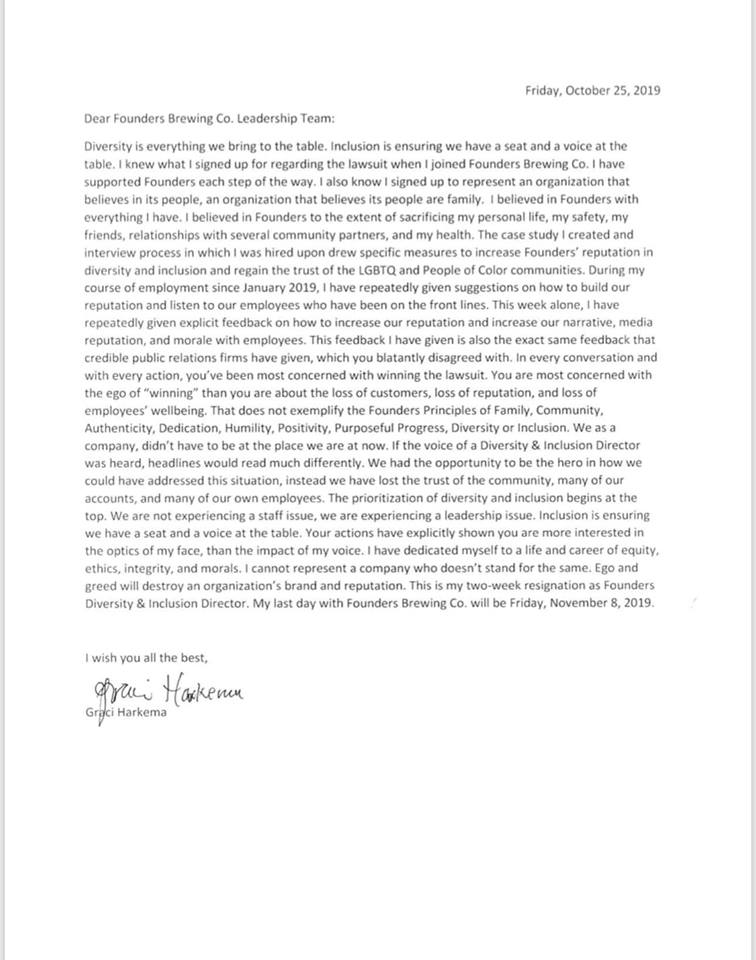 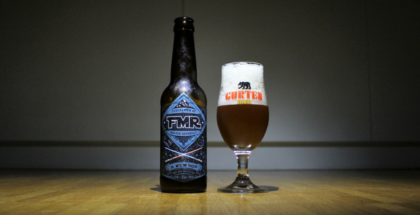 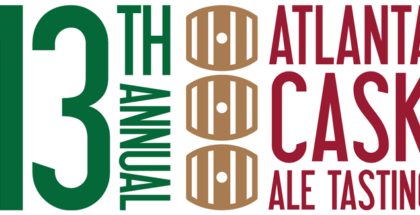