The four selections, all at 11.5% ABV, can be purchased in mixed 4-packs (12 oz) at the brewery’s release party. The details can be found on its Facebook Events Page.

As one explores the variants, it is easy to see that each one is bold in flavor. BuckleDown is not afraid to make beers that some will hate, some will love, and few others will be in-between. All the beers are well-executed. But, like 31 flavors of ice cream – you decide what you like or don’t like.

One will notice a thinner body than some other BBAs, notably in the base. But, it’s also a little more body than what existed in 2018. My guess is that this is a trend (and one we’ve seen in numerous other breweries as the BBA program has matured). However, the slightly thinner body in Significant proves effective in allowing the adjuncts — the flavors in the variants — to shine.

To wit: The variants are not an afterthought here; they are the star.

The whiskey flavor is simply lovely. After using Woodford and Buffalo Trace barrels in previous years, it was interesting to see how it worked with Few. Sip after sip allows the whiskey flavor to grow. There’s a little chocolate and vanilla, and maybe some caramel you might say, too, as well as an oh-so subtle note of oak.

My only negative is that it just needs to a touch more thickness in the body….but read on.

Well, without question the cocoa & chocolate is my favorite beer within the Significant BBA series. It’s an outstanding BBA. The added chocolate/cocoa provides extra body, or at least I perceive it as such. The flavors are outstanding, too. One will enjoy a constant interplay between sweet and bitter from the milk stout and chocolate. The vanilla dances in the background, too. Overall, the balance is sublime and the beer is almost impossible to sip slowly. 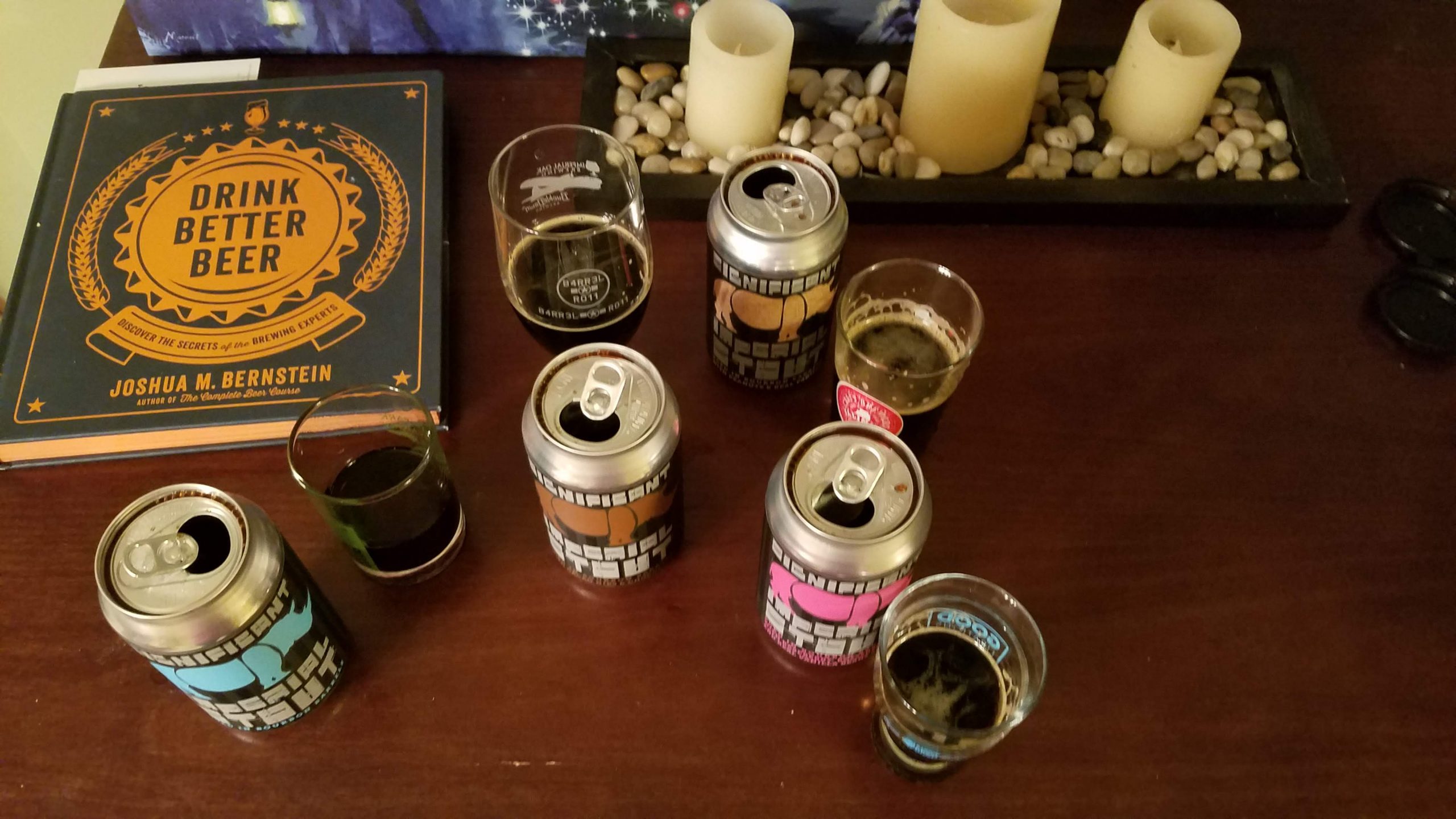 Take me out to the ballgame, here. You certainly get peanuts in this one. I first thought: Where is the vanilla? However, after a few sips the vanilla notes grow and then serve to mellow out the salted peanut flavor. The earthiness and salt in the beer provide for a dry finish, too, which is an intriguing characteristic in a milk stout, and a pleasing one, at that. All told, while it is certainly peanut-forward, to be sure, the whiskey, peanut, and kiss of vanilla work well.

The Double Berry certainly exists as the most robust, and most distinct of the variants. Most likely, it’s the type of beer that will appeal to a specific audience, but BuckleDown handles berries well & it shows here: naturally sweet, not syrupy at all. The berry aroma is unmistakable on the nose, and then one gets all the flavors of berries and the milk stout. The whiskey notes and barrel character are a bit muted in this one, but that’s no surprise given the bold flavors.

I would prefer chocolate to vanilla as the third ingredient here, as I think raspberry and chocolate marry well, but that’s a minor argument at best as the caramel nature of the stout also serves as a good complement to the berries. I also can imagine this recipe working in Rye Whiskey barrels almost like jam on rye toast. Regardless, it’s intended to be a berry-forward BBA and, for those that love beers like this, they’ll likely find it to be berry berry good.

The good thing with BuckleDown is that we know they are not afraid to go bold with flavors, change barrels and ultimately offer a variety of options for beer fans when it comes to Significant. And, if you attend the Black Wednesday party, you can try a couple of special variants, too: Mounds Bar (toasted coconut & chocolate) and Mexican Hot Chocolate (Chocolate, Vanilla, cinnamon and ancho Chilies).

Like many breweries with November BBA releases, year three seems to be the point where the program has turned the corner and on its way to a must-taste every autumn and winter. I suspect it will only get better from here.