Dogfish Head Brewery continues to be one of my favorite breweries in the country due to their unrelenting pursuit of brewing daring beers that challenge and excite the average beer lover. Sometimes, these beers fall flat and the flavor notes don’t mesh like they should, but most times, they create something new and inventive that makes me take notice. Their newest offering, Vibrant P’Ocean, which was done in collaboration with the nearly two centuries old Brouwerij Rodenbach, falls into the latter category.

The new blended Sour Ale combines the mastery of both breweries in pursuit of a drinking experience that feels familiar and emblematic of two breweries separated by thousands of miles. Vibrant P’Ocean comes in at 4.7% ABV and is composed of a two-year, foeder-aged sour from Rodenbach mixed with a Dogfish Head kettle sour brewed with pilsner malt, malted wheat, elderberry, elderflower, sliced lemons and Belgian fleur-de-sel. I was lucky enough to get a few cans of this new beer from Dogfish Head recently – here are my thoughts.

The first thing to notice about this beer is the color—it’s a beer that is meant to stand out when poured into the proper vessel. As it hits the glass, the bright red liquid eventually settles into a dark pink color with an above average level of fizz and bubbles. In fact, the medium foam head of my beer took a few minutes to dissipate, making the first few sips of this one even more lively.

On the nose, you get faint whiffs of berry, lemon and oak, but neither flavor note stands out on its own. In fact, I’d say the aroma on this beer is fairly muted compared to some of the other sours I’ve had previously. While aroma can often be an indicator of intensity in flavor, I was pleased that this blended sour can off a bit more subdued on first approach.

On first taste, you start to feel the creativity put behind this beer, as it drinks much deeper and more complex than your standard kettle sour. The presence of Rodenbach’s oak foeder-aged ale stands as the burly backbone of this beer, providing the needed depth and flavor combinations you’d like to taste in an blended ale. It is definitely a testament to the brewing skill of both breweries to figure out the right blending equation of these two beers so that it wasn’t overbearing or mouth-puckeringly sour—or sweet.

The foundation set by its malt bill also allows for the more impactful sour notes to come through in waves, instead of all at once. Yes, it’s sour on the lips but not overly so—in fact, I found myself looking for a bit more tartness after awhile. You get more than a few fleeting seconds of pucker and fruit, presumably from the presence of the tart kettle sour. Then, the flavor builds as you dive into a second level of flavors led by oak and elderberry that is present due to Rodenbach’s aged ale.

It’s so well-balanced, between astringent and floral fruitiness. No one floral or fruit note overwhelms, but the lemon and elderberry do shine through the most as this drink settles. Overall, it is incredibly drinkable for a blended sour ale, so much so that I never found myself having to reset, either with food or water, to preserve my tastebuds. Instead, sip by sip, this beer stood out as a controlled yet vibrant depiction of what a blended sour ale can be.

Vibrant P’Ocean is available nationwide in six-packs of twelve-ounce cans. The two breweries are also exploring a future, limited release of Vibrant P’Ocean that will be available in Belgium. If you’re a sour beer fanatic, I would definitely recommend adding this one to your shopping list. Cheers! 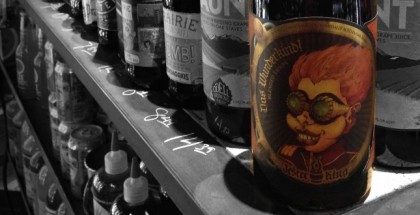