Jake Goodman, the marketing and sales director at WeldWerks Brewing, was in the middle of answering a question about Juicy Bits when a loud thump thump thump reverberated through his Zoom audio. He paused and looked off-screen. “Hey, buddy, Daddy’s talking to his friends—can you please hold off on the drums until I’m done?” he asked his son. The camera cut back to a laughing Neil Fisher, the head brewer and co-founder of WeldWerks. A majestic pink dollhouse towered behind Neil; his children’s playroom had been repurposed into a makeshift interview corner. Welcome to “Dialed in with WeldWerks”. 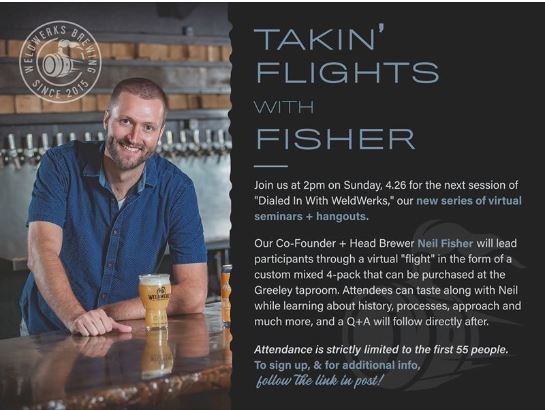 In response to their taproom’s temporary closure, and in their typical spirit of community, WeldWerks Brewing from Greeley, Colorado, has launched a series of free virtual events called “Dialed In With WeldWerks.” These events are hosted online through video platforms, promising a laid-back vibe with event names such as “Tasting 101 aka Smelling Smelly Smells”. This past weekend was “Takin’ Flights with Fisher,” in which Neil Fisher himself cultivated a four-pack of current releases to discuss with a small-ish group of 55 participants via Zoom. The event itself was free, and anyone who wanted to purchase the four-pack could do so at a special reduced cost. Here are the highlights from each beer in the flight: 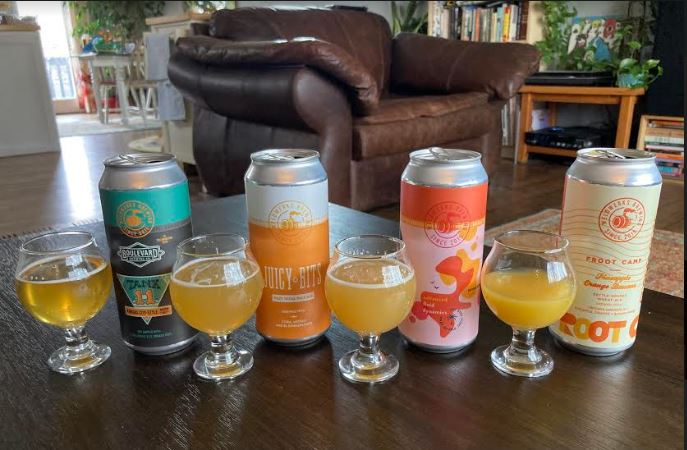 The inaugural beer was Tank 11, a combination of Boulevard’s legendary Tank 7 and the hop profile of Juicy Bits, resulting in a Kansas-City Style Saison Ale brewed with Citra, Mosaic, and El Dorado hops, and coming in at 8.1% ABV. The virtual flight party started off with a bang as Fisher unveiled a surprise guest: Steven Pauwels, brewmaster from Boulevard Brewing and the collaborator behind Tank 11. “You’re my biggest hero in the industry,” Fisher said to Pauwels. “You’re more knowledgeable than anyone in the room, but you’d never act like it. And you’re so willing to learn.” Tank 11 was the perfect start to the flight, with its crisp saison notes of classic Tank 7 combined with a hoppier profile from the Juicy Bits’ influence. We also learned that another Boulevard collaboration is coming up with WeldWerks and Side Project: a double barrel-aged stout, set to hit the market around June. (Most of the video chat participants looked visibly overjoyed at this news.)

Next up was Weldwerks’ flagship Hazy IPA. Fisher explained that the recipe was still the same since their original batch (a 1-1-1 hop ratio), which was unveiled at their one-year anniversary party. The pineapple notes that feature prominently in this juice bomb come from the Mosaic hops, Fisher told us; no fruit juices or fruit is ever added to this beer. Juicy Bits was inspired by Trillium and Treehouse, though Fisher and Goodman explained that the hop contracts available early on for a then-new brewery definitely factored into the recipe.

The Froot Camp series has been one of the most divisive experiments by WeldWerks, and they know it. This iteration of Froot Camp is a kettle-soured wheat ale brewed with pineapple, orange, and banana, resulting in a smoothie-style brew that is almost thick enough to require a straw. “Is it really beer?” asked one participant. “Legally, yes,” Fisher answered with a grin. The Answer Brewpub and The Veil Brewing Company were inspirations for the series, and the team wanted to create an “absurdly silly and fun” expression of the style. When someone asked about the risks of exploding cans and heavily fruited beers, Neil revealed that they bought a flash pasteurizer to lower that risk. They also don’t distribute this series; it sells out so quickly in-house that they prefer to lower risk even further and keep it as an on-site only purchase option.

A Hazy Double IPA brewed with Sabro and Lotus hops, this was a banger of a beer to end the flight with at 8.8% ABV. Both Fisher and Goodman agreed that this beer is one of their team’s all-time favorites. Fisher described the importance of finding hop profiles that not only play well together, but actually become greater than the sum of their parts when combined. The creamy tropical notes that emerge from the Sabro and Lotus pairing are undeniable, and the smoothness belied the high alcohol content for a finisher that was easy to polish off.

Despite the aforementioned drum-related interruptions, “Takin’ Flights With Fisher” went smoother than any Zoom video call with 55 random participants should hope to go. Participants were clearly excited to be there and eager to hear Fisher’s opinions, and with Goodman as his co-host and moderator, most of the “audience” members were able to ask questions and create a fun dialogue throughout the meeting. The session was slotted for an hour but ended up lasting 90 minutes, as the conversation drifted from the flight to Neil’s favorite everyday whiskey (Weller Antiqua 107), his current favorite Medianoche (1910, Premier Vol 1 and 2, and Old Fitz), and the worst beer they ever made (Cherry Vanilla Milkshake, which according to Goodman tasted like “cough drops…blended with nightmares”).

Takin’ Flights With Fisher felt more like getting day drunk with your friends in quarantine than attending a formal presentation, which is to say, it was downright awesome. And if it took a national quarantine to get to share a beer with the WeldWerks crew on my couch at 2pm on a Sunday, well, that’s what I call a silver lining. 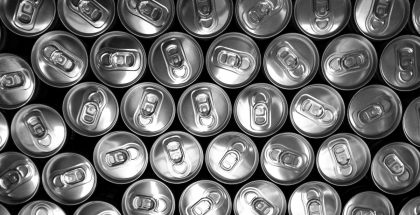 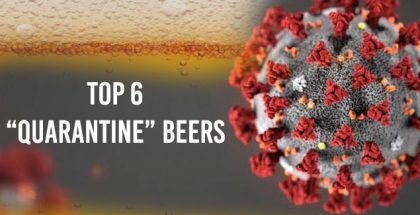 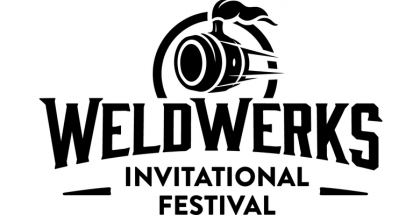