So to kick off the new year, we reached to a few of our industry friends to ask them what they’d bring to a “Dream Bottle Share”. For continuity’s sake, we asked each of our guest contributors to share four of their favorite beers from 2020 as well as four of their favorite beers all-time that they would bring to a hypothetical dream bottle share.

For our first entry, we spoke with Miguel Rivas, one of the most well-respected beer photographers in the world and founder of The BeerTrekker.

As much as I am not crazy about Pastry Stouts, this one stood out for me for a few reasons. First, because it’s a collaboration beer made by my girlfriend, who is from Ecuador, and one of my best friends since high school, who has his brewery in Costa Rica. I was present when they brewed this beer as a one-off collaboration in the summer of 2019.

The beer has a Stout base and they did some alchemy with the ingredients. They added five different malts, vanilla, cacao nibs, lactose, and then Dora, my girlfriend, prepared this tincture with coffee, mandarin peels, and chile peppers, which she added when the beer was already at the fermentation process.

After almost a year and a half in the bottle, I had this beer on my last birthday in October this year while I was in Ecuador and it had changed so dramatically, for the good. All the flavors were beautifully blended together, in harmony, nothing was overpowering. It was just a beautiful creation.

The Art of Holding Space & Architects of Harmony | Keeping Together

If you are a beer person or somewhat of an aficionado, I will then assume you have heard of Averie Swanson. She is the former head brewer of a little brewery in the Hill Country of Austin, Texas called Jester King. After she left the brewery some two years ago I believe, and she moved to Chicago where after some time working at Half Acre Brewing, she started brewing her own personal beers under the title, Keeping Together.

I had to choose these two as they were the first two beers she put out from her new brand. TAoHS is an elegant table beer, clocking at only 3% ABV, it’s beautiful, flavorful and the drinkability is off the charts, one of those beers that if I could I would like to bathe on.

AoH is a mixed culture Saison, refermented with Illinois Black Locust honey and dry-hopped with Michigan Chinook hops. It’s a dry, thirst-quenching beer, very little acidity and masterfully balanced. It was just a treat to be able to try her beers and I thank Averi immensely for sharing them with me.

This beauty hails from the land of the Tango, Argentina. A Sour Ale, fermented with raspberries, a shit ton of them, around 200 gr per liter (feel free to do the math). Refreshing, not overly sweet, the right balance with the acidity, sourness, and the fruits. One of those beers that you could just drink endlessly during a hot summer day and then some.

I chose this beer because after my visit to their brewery in Argentina earlier this year (right before the pandemic hit) I was amazed by all the beers they were putting out and their approach to making beers, not only the innovation but their vision and techniques.

In this day in age in the craft beer world if a beer doesn’t have the words “hazy” “NEIPA” “DDH” or the likes, most likely people will overlook it, sadly. I am one of those weird humans that has never been a fan of IPA’s, sure I did try them back in the day, but I quickly moved to other styles and developing my palate to other flavors.

It was very refreshing to try this beer, as plain as a Pale Ale would sound this day, this one was fermented at much lower temperatures, like a Lager, which gave it the clean profile, the extremely high drinkability, it was just a poem of a beer.

I chose this beer because it became my favorite while I have been in Ecuador for the last 6 months. I got to visit their small brewery and I am very impressed with what they are doing there, their barrel beer program is pretty unique and phenomenal.

If you are a Pilsener fan then you should know about TipoPils, the OG of the dry-hopped Pilseners (since 1996), hailing from Italy. This is what you would call a perfect beer if perfection existed. Balanced, refreshing, flavorful with an amazing drinkability. This beer pretty much defined the style of what we now hear called Italian Pilsener. It’s a classic.

I chose this beer because after trying it on several occasions in NYC I was hooked, but after visiting them at their place in Italy in the summer of 2018 and spending the day with their founder Agostino Arioli, I got to understand his vision when he designed the beer some 22 years earlier. We also had a lot of fun in Brooklyn a few months prior to my visit to Italy.

If there was ever a time to throw the term “Whalez” this would be one of them. This one was a collaboration between, ready for it? Allagash, Cantillon, and Russian River back in 2014. It was a three-way blend that consisted of three equal parts of 3-year-old Cantillon Lambic, 2 ½-year-old Allagash Coolship, and 2-year-old Russian River Sonambic. All three breweries agreed that this beer was to be never sold and only be poured at special events.

If you are a fanboy of any of these breweries like I am, you can imagine that this beer would be a delight, and you would not be wrong. A beautiful blend of three masters of their craft, balanced, complex, and with so many layers of flavors as the beer opens up.

I choose this beer because although I could not make it to any of the events that happened 5 years ago when the beer was first served in Belgium, Maine, and California, I am a firm believer that patience is a virtue, and sometimes waiting pays off. On one of my last visits to Allagash in December 2017 for the start of their yearly Koelschip season, I was invited to go and document a day of their brewing process. To my delight when the Koelschip was being filled, their Brewmaster Jason Perkins showed up with not one but two of these bottles to share, needless to say, I was over the moon. There actually is a pretty funny story about this but I will leave that for another time.

It is hard to pick a beer from a brewery that has been making them since the year 1900, it is very difficult to choose from. But ever since I tried Fou Foune, it has had a special place in my heart. This beer is a blend of Lambics aged 18 to 20 months with Bergeron apricots.

There is a beautiful story behind it but I will let Jean Van Roy’s father Jean-Pierre tell it!

I chose this beer because, besides being beautiful and well crafted, although it has become difficult to get, I have been fortunate to acquire a good amount of them over the years and every time I share them with people, some friends, some strangers, it is a magical thing to see their faces the fort time they try it. I am a firm believer that beers always taste better when they are shared.

I am always amazed when I get to try a beer from a brewery that is just starting out, and even more, excite when that said brewery doesn’t even have a place and is making beers that are just mind-blowing. That was my experience with Casa Agria some 5 years ago. Through the magic of social media, these guys were on my radar and I was lucky to be able to try some of their first batches of beer. From that moment on I knew and everyone that I shared their beers with agreed that they were going to be making amazing beverages.

Over the years we have become good friends and I consider myself (self-titled) their unofficial ambassador worldwide! I was also fortunate to have visited their facilities in Oxnard, like an hour or so north of Los Angeles in California, it was amazing to try first hand their beers and pull some nails from some of their barrels.

I chose this beer from them because to me it exemplifies who they are, they make simple, yet complex and elegant beers, and this Grisette, or Table Beer as they call it is a perfect example of that. 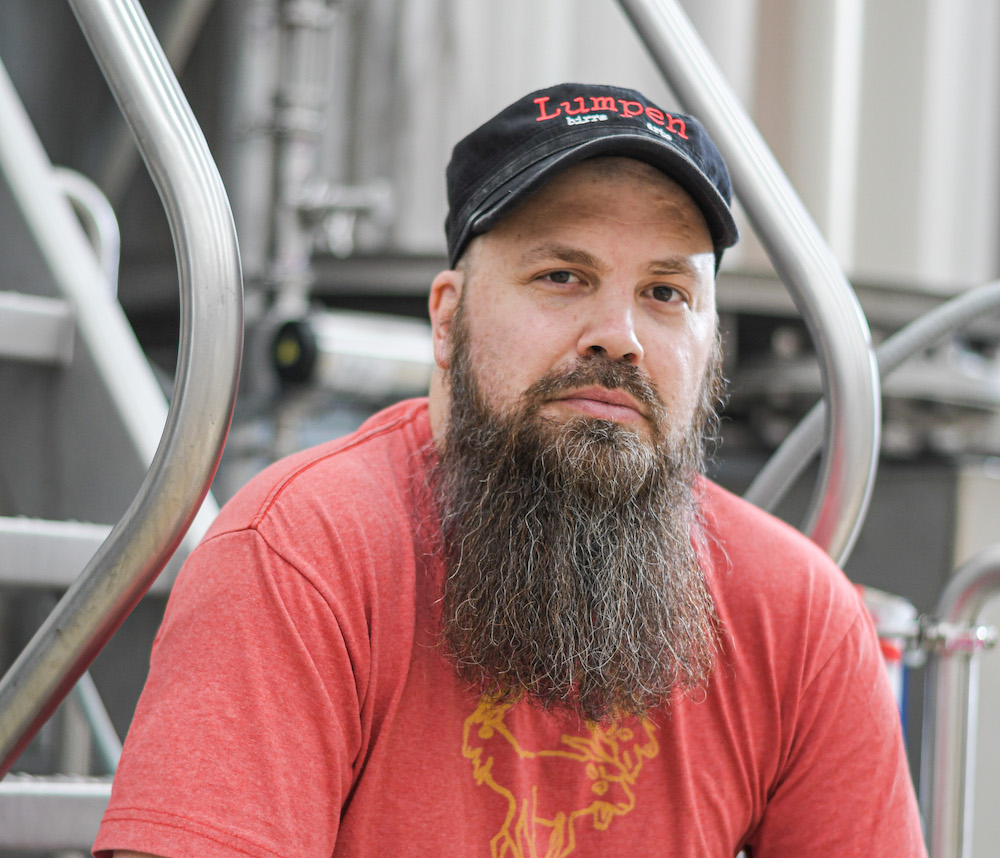 Miguel Rivas is a New York City-based photographer, his background in photography comes from his passion for live music shows, traveling and the artistry of craft beers. Born in Paris, TX, raised in Venezuela and has been calling NYC home for the last 18 years. Founder and curator of The BeerTrekker, a photographic journey and storytelling about the beer culture and the people behind them.

Over the last 7 years he has traveled around the world visiting breweries and documenting it with photography and stories. His work has been published in prestigious industry magazines like Beeradvocate, Hop Culture, Craftbeer.com, Craft Beer & Brewing as well as New York Magazine, PorchDrinking, Plate Magazine and several blogs and other publications. He has also been the official photographer to some of the premier beer festivals around the world.

Since 2017 Miguel has been invited as a beer judge to some of the most important beer competitions in Latin America and in 2019/2020 he has traveled extensively in the region to places like Costa Rica, Colombia, Panama, Mexico, Ecuador and Argentina to explore and document the local beer scene.

Miguel is often invited to podcasts such as Good Beer Hunting, Beer Sessions Radio on the Heritage Radio Network and panels for Travel + Social Good to talk about the power of social media in the craft beer world, branding and brand recognition.

Follow his journey and explore the world of beers with The BeerTrekker and remember: Every beer has a story. Every story has a beer.