Chicago Peaks Kolsch is a collaboration between Westbound & Down and Bierstadt Lagerhaus, and this is the seventh year that it has been brewed. “Kolsch (feels) like a complimentary style between the two breweries’ programs, being a hybrid” says Jake Gardner, Director of Brewing Operations at Westbound & Down. The Lager masters at Bierstadt are able to lend their knowledge to brew this Kolsch, an Ale fermented at lower temperatures than normal. While the basic recipe remains the same every year, the base Pilsner malt and the hop are altered to create subtle differences. This year German Weyermann Extra Hell malt and a touch of wheat work alongside German Tettnanger hops to characterize the flavor profile of this crusher. Last year’s iteration earned a spot on the list of PorchDrinking’s Colorado standout beers of 2021 – high praise in a very crowded and competitive market. The name of the beer reflects the Chicago Peaks mountain range that runs in and around Idaho Springs, CO, the location of Westbound & Down’s original brewery. This range is also home to Mount Bierstadt, one of Colorado’s numerous 14ers and the namesake of Bierstadt Lagerhaus.

Alex Baken, Westbound & Down’s Head R&D Brewer, says he loves making this beer because he “gets to brew one of my favorite styles of beer with some of our best friends in the industry.” He continues speaking of Kolsch saying it’s “a style of beer that takes precision on brew day and proper cellaring techniques throughout… the keys are to produce clean properly bittered wort that will translate into a clean yet snappy finish.“ Upon cracking open a can of Chicago Peaks Kolsch, your senses are immediately greeted by some floral and bready notes. True to style, this beer pours clear in a glass due to its extensive filtering. The taste is pure smoothness from the moment it touches your lips through to the finish. A hint of spiciness from the Tettnanger is present along with big floral notes and some light fruity esters. Alex puts it perfectly when he says, “Every year we end up with a beer that is delicately floral, fruity and crisp with a dry finish that keeps me coming back sip after sip!” That is a description of Chicago Peaks Kolsch that I could not improve upon.

Even if you do not have access to this beer itself, a refreshingly wonderful Kolsch can surely be found at a brewery nearby you. If you’re looking for something that is easy to drink while still providing substantial flavor, Kolsch is a style you should seek out this summer. While Chicago Peaks Kolsch is only brewed once per year, its two collaborators are known for making amazing Lagers. Bierstadt’s Slow Pour Pils is on my Mount Rushmore of beers while Westbound Italian Pils is a year round staple of the Colorado Lager scene. Find yourself a locally brewed Lager and enjoy a couple of them in the warm weather with some good friends. 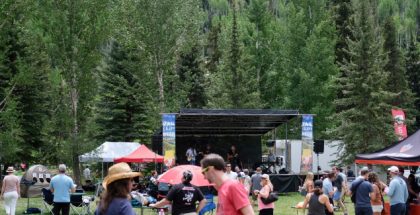