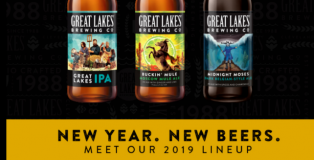 Born in 1988, the 30-year-old independent and employee-owned brewery, Great Lakes Brewing Company (GLBC) has announced its 2019 lineup. Alongside favorites such as Edmund Fitzgerald Porter and Burning River Pale Ale, GLBC unveils its new, year-round Great Lakes IPA, an IPA that honors its employee owners. As well, GLBC has a new cocktail-inspired Buckin’ Mule Moscow Mule Ale, and the Moses Mix Variety Pack, which features Holy Moses White Ale alongside two variants. But, that’s not all. New cans, new branding and new beers highlight the schedule for next year.
END_OF_DOCUMENT_TOKEN_TO_BE_REPLACED 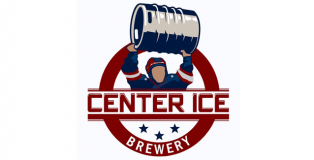 As we finish up another year of beer, it’s time to look ahead to what we’ll be pouring, sipping and loving in 2018. I’ve reached out to a few of the Midwest’s best brewers to see what we can expect from them in the next Year of Beer.
END_OF_DOCUMENT_TOKEN_TO_BE_REPLACED