Let’s start by defining what a lawnmower beer is, at least for the purposes of this article. In the past, a lawnmower beer was a cheap lager that you downed a couple of in your lawn chair after spending a hot afternoon mowing the lawn. It was basic, refreshing, and mostly flavorless. That was all well in good when we didn’t really have options, but we’re in a different world today. For our purposes, we’re talking sessionable, fairly low ABV, flavor-forward and not super complex beers. Basically, if it goes down easy and refreshes the gullet without getting the party started too early, we’ve got us a lawnmower beer. If you’re ready to get mowing, here are six brews to get you going!

Touted as the first and only beer brewed with 100% Kentucky-grown grains, this crisp, flavorful lager goes down like no other. As a nod to the brewery’s downtown Louisville neighbor the Louisville Slugger Museum & Factory, it is aged on white ash – a common wood for baseball bats. The highlight of this well-balanced lager is the fresh taste of Kentucky grains, complemented by a mild grassiness and an overall crisp, refreshing profile. Down one when you’re done mowing because you’ll certainly want more.

Another grain-forward beer, this is one is for the Hoosier in you. Sun King, an Indianapolis-based brewery, has put together a slightly sweet, mildly bitter, and fully refreshing Cream Ale that makes for a great summer beer while imparting a light corn and cereal aroma reminiscent of crisp autumn days. Smooth and refreshing, this works just as well for sucking down after a hot session of mowing as it does sipping on at a summer BBQ with friends (from the appropriate social distance).

Survival is key in our current situation and Country Boy Brewing, based out of Georgetown, Kentucky, is convinced we can all Survive, country boy/girl, or city boy/girl. Check out this inspirational video they put together if you need a little motivation for these trying times. Survive is as crisp and refreshing as a Pilsner should be, with the added bonus of just enough aroma from American hops to satisfy the hop-head in you. Not a hop-head? Don’t worry; the hop aroma doesn’t linger long and there is very little bitterness to this delicious little gem.

Boulevard Unfiltered Wheat Beer is a unique take on the hazy trend. Unfiltered and cloudy, it has the feel of a Hazy IPA, but the flavor of a Wheat. Although mild and easy-drinking, it has a bit more of a hop profile than the other beers here. Along with the wheat, we get a bit of lemon, some grassiness, and some sweet corn. An enjoyable beer to sip after mowing the lawn or during a day at the lake. There must be something to it, as it’s the best-selling craft beer in the Midwest according to Boulevard Brewing Company’s website.

This one is for you gluten-free and herb-loving folks. If you don’t fall into either of those categories, you still very well may enjoy it. In an email discussion with John Stecker, Founder of Austin, Texas’ 4th Tap Brewing Cooperative, we were told that “Sun Eater is actually one of our oldest recipes, predating the brewery even opening by a few years. It definitely has it’s crowd. A small crowd, but very vocal.” Sun Eater has an effervescent, citrusy feel to it. Although a gruit, the herbal notes aren’t overpowering. We initially get a subtle touch of rosemary, followed by some lemon on the nose. The flavor of sorghum isn’t overpowering but may take some getting used to for those of us accustomed to beers made from more standard grains. And that 1 IBU? Stecker says they list it that way as a bit of a joke, as there are no hops to impart isomerized alpha-acids. There definitely isn’t much in the way of bitterness to this one! It also isn’t as tart or sour as one might expect. Just a light, refreshing quick-drinker.

If you’re more of a cider drinker or just don’t care for hops, this is another one for you. Braxton Brewing out of Covington, Kentucky (across the Ohio River from Cincinnati) brewed this tart, fruity German-style ale as part of their Trip Series. The high wheat content (50% of the grain bill) makes for a refreshing, smooth drink with just a bit of acidity imparted by the passionfruit. Bright and sunny, it’ll remind you of summer trips of the past (or the present), depending on whether you’re enjoying it quarantined at home or have decided to hit the road. Try this one blended with a bit of lemonade; you won’t be disappointed!

Brabble, from a Louisville, Kentucky brewery situated along the Ohio River (its namesake), was never intended to be anything fancy. Scott Shreffler, “Co-Founder and Hype Man”  told us that it was meant to be a “clean, simple all-day drinker.” Blonde Ales aren’t meant to be overly complex, but they should still be refreshing and flavorful. Just the ticket for an afternoon of mowing. This beer is the epitome of a good lawnmower beer. Though very light and thirst-quenching, it has a robust malty backbone and just a touch of hoppy bitterness. Smooth, crisp, clean, and just a bit sweet, it’s sure to please until you’re ready to move onto something with a little more heft.

What are some lawnmower beers you enjoy? 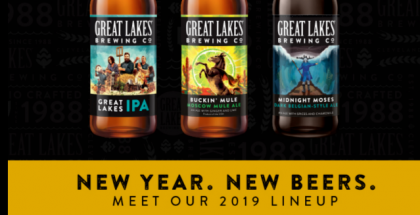