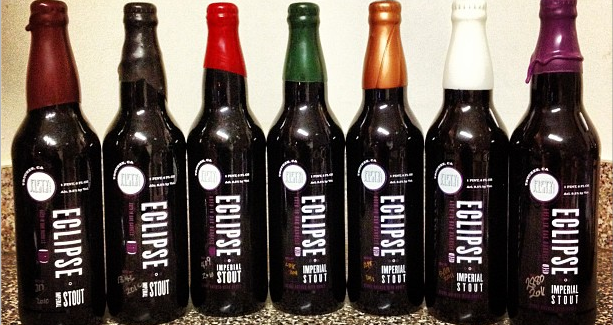 When in doubt, barrel-age it. With craft brewers from Tampa to Tacoma taking advantage of the burgeoning trend throughout the beer landscape, we’ve seen everything from calvados to tequila barrels make an appearance, with varying levels of success. Joining us for today’s adventure in barrel-aged beers is Fifty Fifty Brewing Company’s Eclipse Rittenhouse Rye imperial stout, a decadent treat hailing from Truckee, California just miles from Lake Tahoe.

This sleek, wax-sealed bottle is eyeing me up right now, demanding to be opened, but before we dive in, a little context on Fifty Fifty can’t hurt. Brewmaster Todd Ashman first started the Eclipse series back in 2007, beginning by barrel-aging their Totality imperial stout in Old Fitzgerald bourbon barrels. The program grew from there, with each vintage offering a number of unique barrel treatments from some of the most popular whiskey producers in the country such as Elijah Craig, Jack Daniels and Buffalo Trace.

After starting with just Old Fitzgerald in ’07 and the now fabled ’08 Pappy Van Winkle varietal, the Eclipse series ballooned to 11 different versions in 2012. Overwhelming acclaim and demand eventually gave way to increased production, as this once highly limited brewery-only rarity now sees distribution to a number of cities throughout the country including Denver, Philadelphia, Chicago and more. 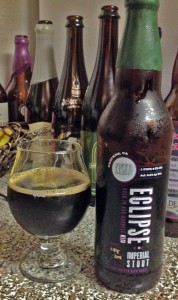 Today we have a 2012 Eclipse Rittenhouse Rye (bottles are color coded by the wax) ready to be delivered into a snifter for maximum stout enjoyment. The pour is pleasantly inky and viscous, asserting itself as a dark and dominant imperial stout behemoth, capped with a sudsy layering of softly toasted khaki head.

Fans of whiskey and barrel-aging will immediately light up like a pinball machine after breathing in, as scents of rye, toasted oak, residual vanilla and dark chocolate send the senses into a near-stupor. Whiskey and roasted dark malts are right up front, swirled with caramel and dark sweetness.

Just in case the boozy glow radiating from the glass hasn’t rang your bell already, the first sip cruises across the tongue like velvet, carrying a sultry mix of whiskey, dark chocolate and vanilla. Booze-soaked cake and brownies splash upon the palate, painting with sticky sweetness. Roasted dark malts lurk throughout with touches of toasted grain and oats as the beer crescendos into a warm, creamy, soft finish.

With nearly 30 varietals of Fifty Fifty Eclipse released from 2007-12, the brewery has invited us to fall head over heels into a world of experimenting with bourbon, rye and brandy barrels. With some treatments lending themselves to a better experience than others and the question of bottle variation always lingering, Eclipse Rittenhouse Rye is a bullseye for barrel-aged beer fans.

Now that your interest is piqued, when and where can you find Fifty Fifty Eclipse? Currently, the 2013 vintage is taking a 6-month nap in oak barrels, scheduled for release at the brewery in December. Check out the official Eclipse page for info on distribution and a complete style guide.