If you’re going to the most incredible bottle share of all time, somebody needs to bring some amazing food. Not only are the patrons going to need something to soak up the alcohol in their bellies, they will also need something to cure the munchies when the booze takes over. To feed the masses of the PorchDrinking.com 2nd Anniversary Party, I knew as the founder of Drink and Spoon, that I had to come up with something scrumptious, plentiful, and cooked with beer. This is how Rauchbier Baked Beans were born.

When translated, rauchbier literally means ‘smoke beer’ – and figuratively means ‘perfect beer for baked beans.’ My one dilemma was that I have cooked with smoke beer before and sometimes it can be quite strong. I wanted all the liquid in the Crock Pot to be beer so I had to find a brew that packed a punch, but like a softer punch that doesn’t really hurt. After playing 21 questions with my local beer man, I decided I’d go with Out of the Ashes Rauchbier by Fort Collins Brewery. It is smokey in a more subtle way than other rauchbiers. Usually, I feel like I couldn’t drink a whole bottle of a rauchbier but surprisingly, I was tempted to drink this one. For the sake of the recipe though, I denied myself any gulps and poured it over the hundreds of little beans that were thirsty to soak it up. The end result was a giant pot of spicy, smokey deliciousness – just what I wanted. 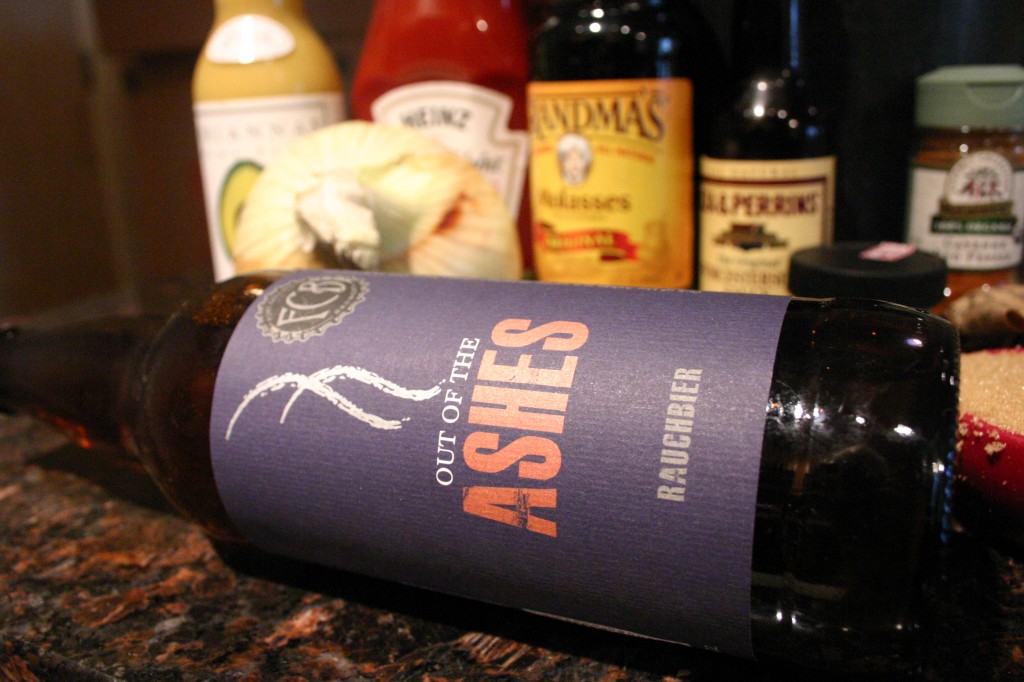 2 jalapeños, sliced with seeds remaining (to give it a good kick of spice! If you aren’t into that, de-vein and de-seed the jalapeños)

1 bottle of Out of the Ashes Rauchbier

The night before baking the beans, they will need to be soaked in water in order to rehydrate. If you have some high rimmed baking sheets, laying them out on those and covering them in water would be good but this might take up a lot of room in the kitchen. I used a giant pot but I messed up. I didn’t put in enough water so only about half were well hydrated in the morning. Make sure if you put the beans in a deep pot, they are covered in about 3 inches of water. If you can, put them in the pot after dinner and give them a good stir before bed. 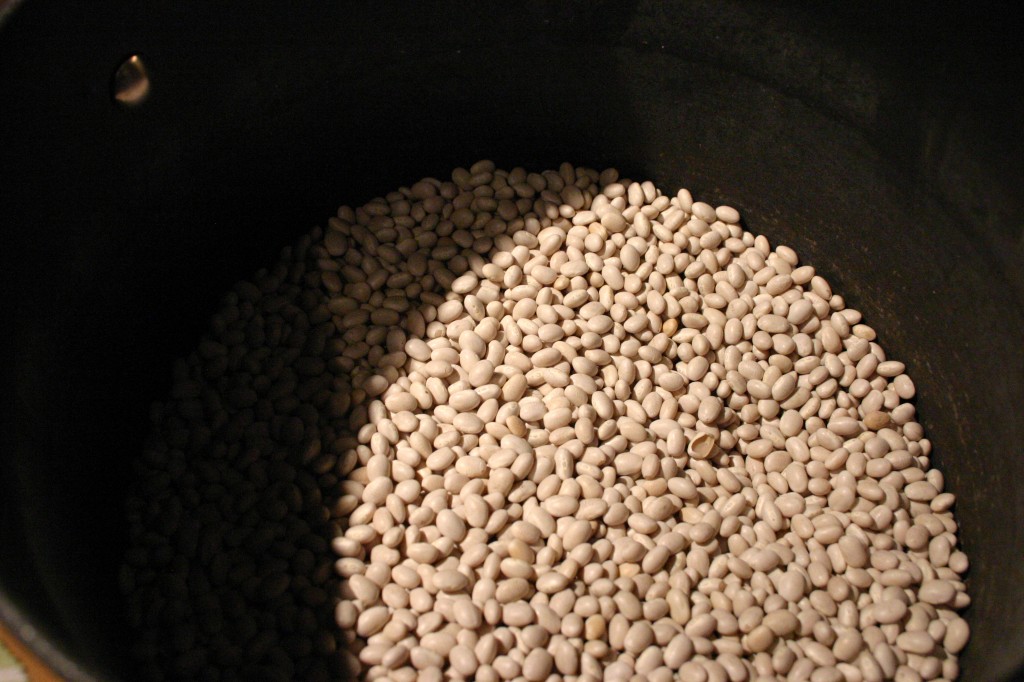 Set your alarm for early-ish in the morning because these baby beanies should cook for a good 7-8 hours. Luckily, it’s extremely easy to throw this recipe together and by dinner time, your house will be filled with the enchanting smokey smells of baked goodness.

Chop the pound of bacon and fry it up on the stove. 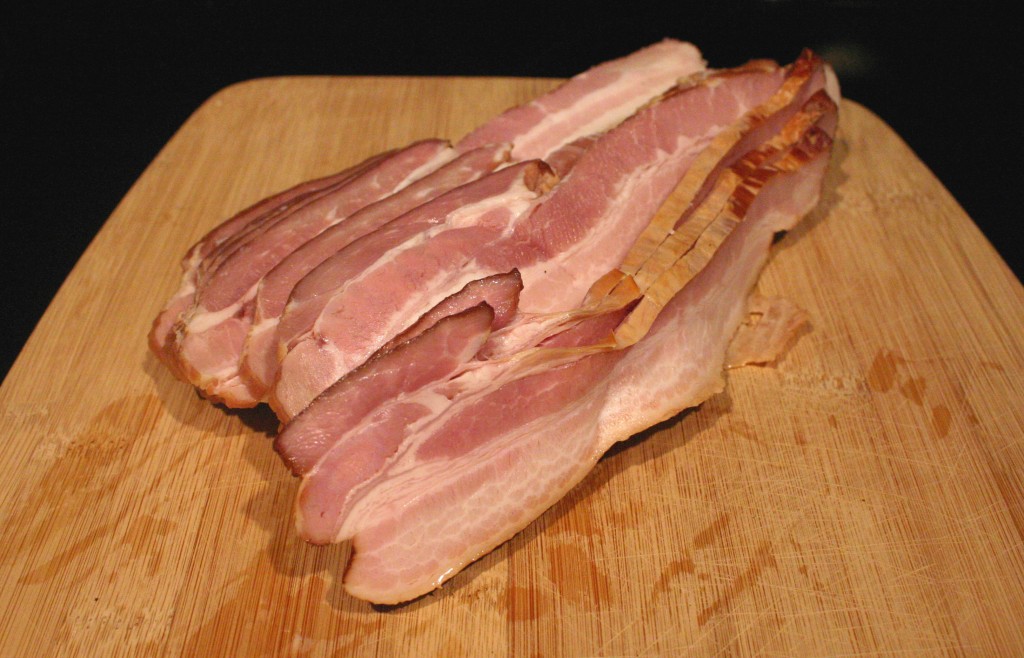 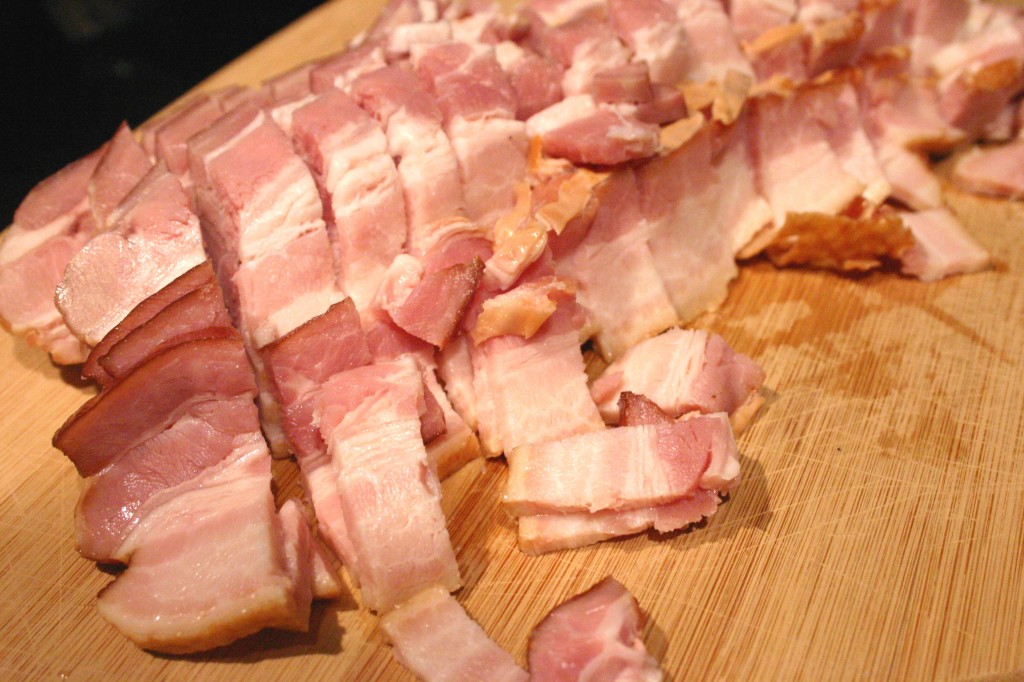 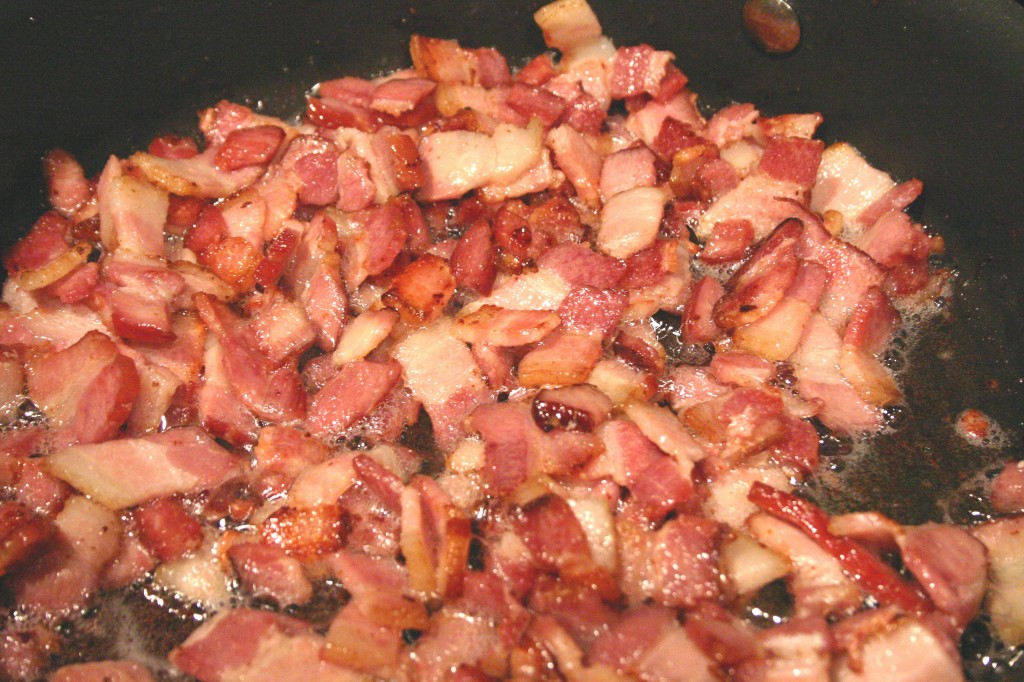 When it starts to brown a bit and a lot of the fat has been rendered, add the chopped onion and sliced jalapeños. Cook until tender – probably about 5 minutes. 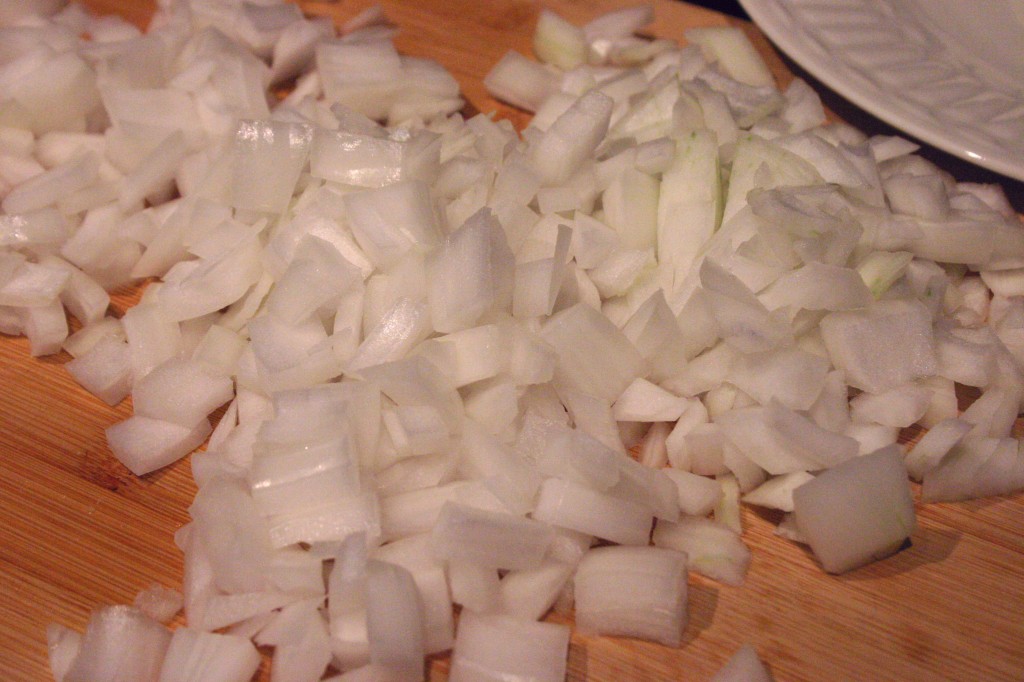 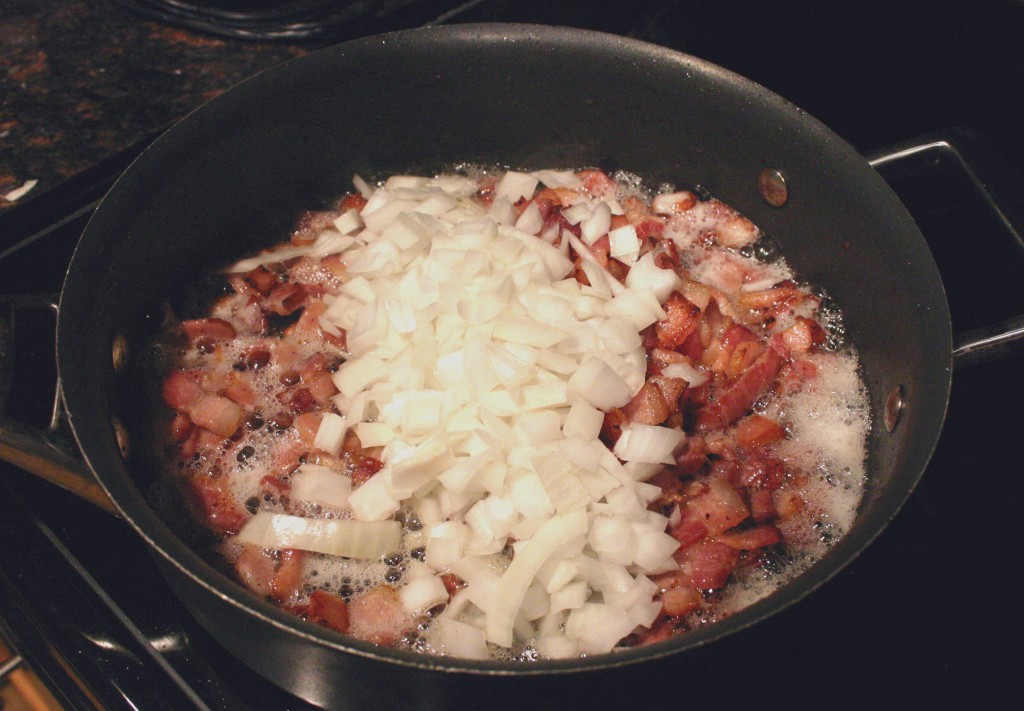 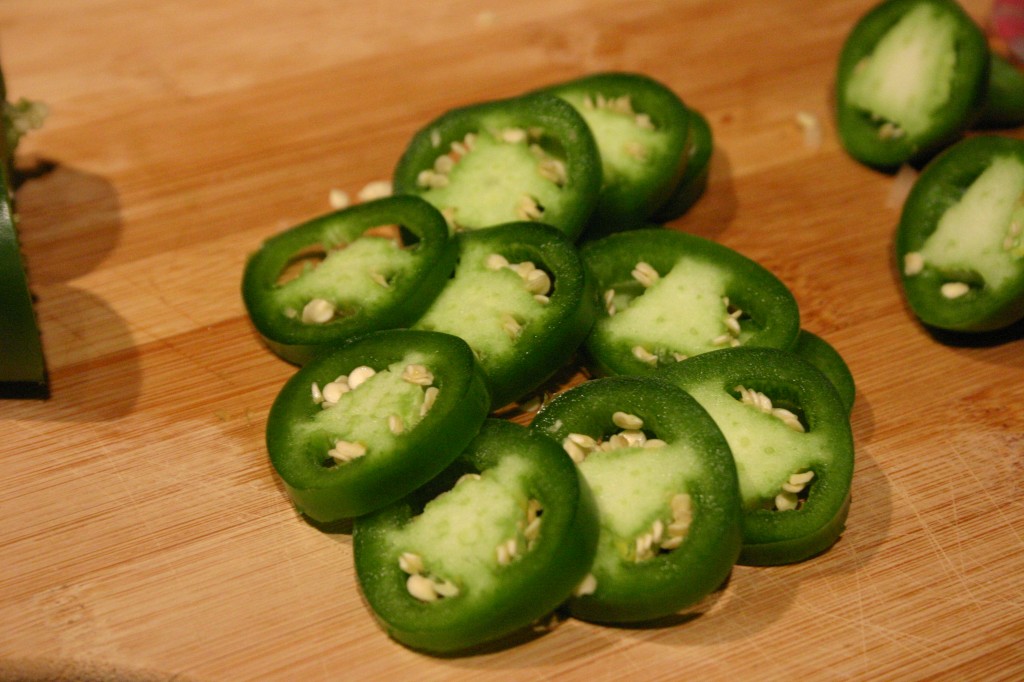 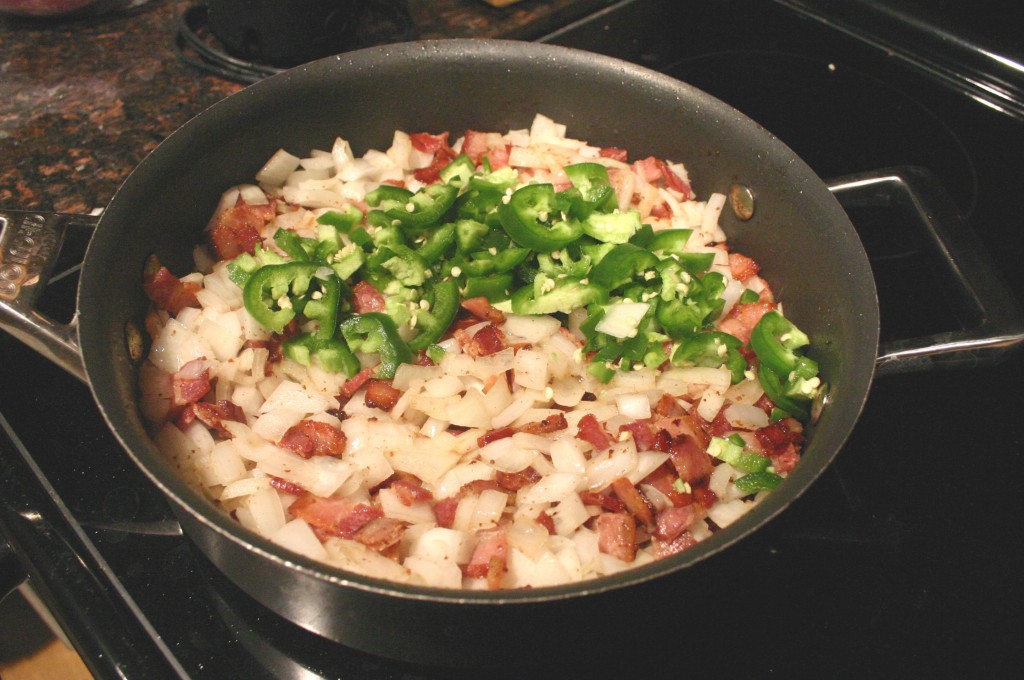 When finished, throw the onion + jalapeños + bacon in the slow cooker along with the beans and all of the other ingredients. I saved the beer for last. Now – be patient – wait 7 or so hours (stirring every once in a while) – and then you’ll have a giant batch of smokey/spicy baked beans to serve to the family or bring to a party! 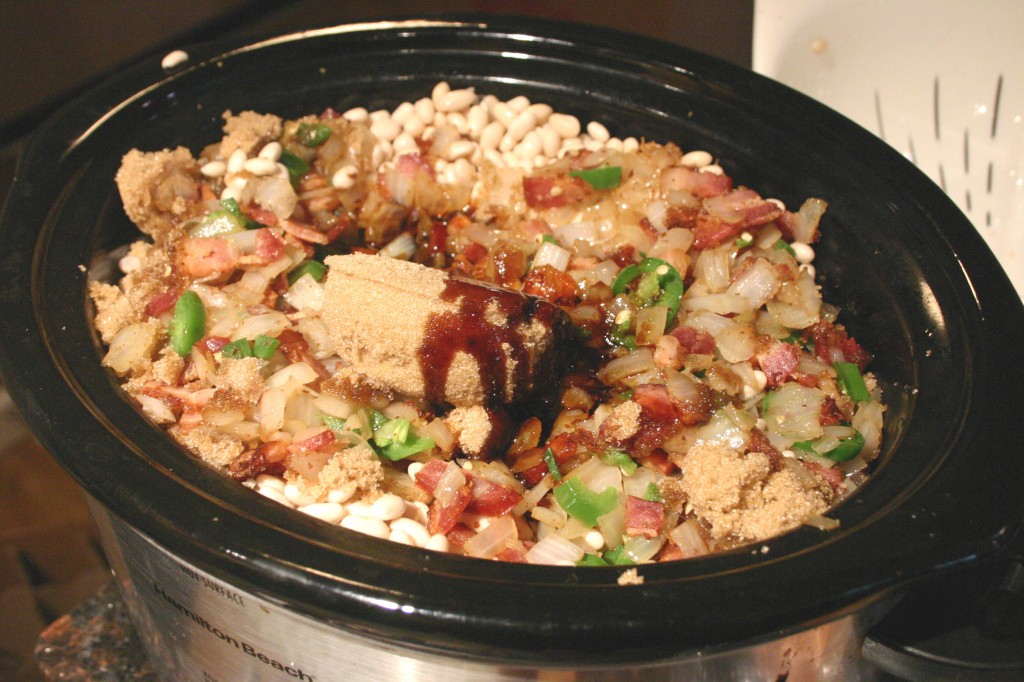 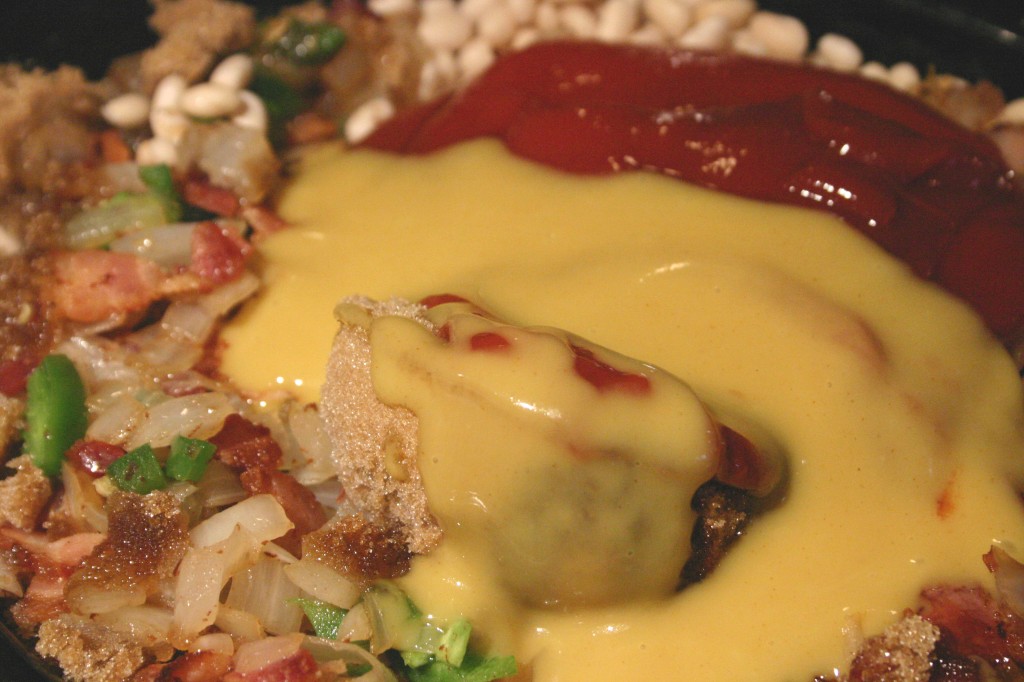 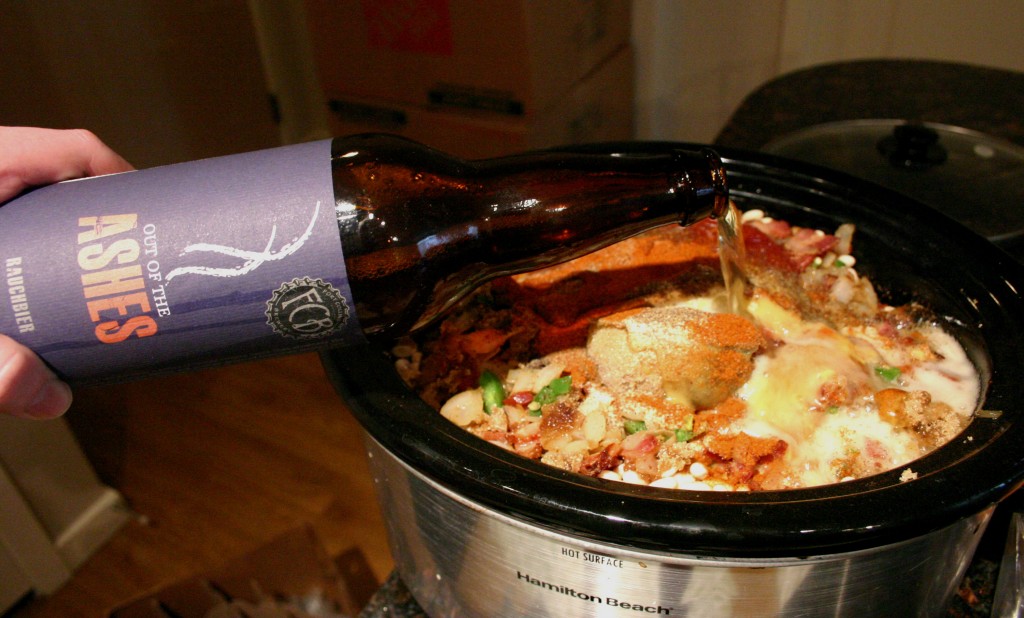 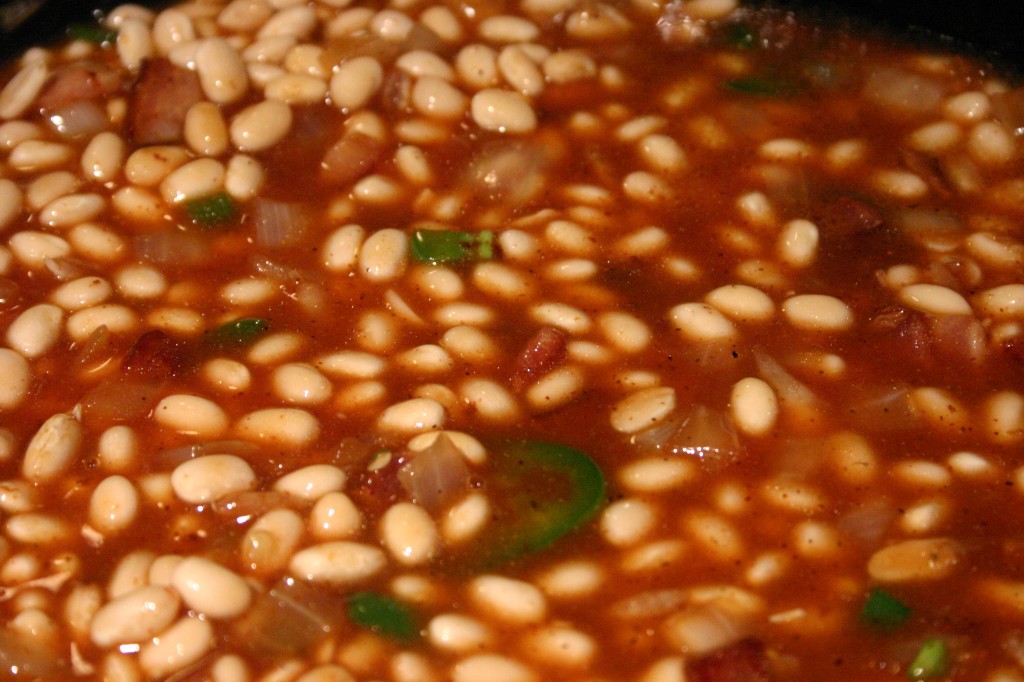 Also, I didn’t take a final picture because the beans finished cooking at the party but I’m sure you know what baked beans look like. Well these ones….they look 10x better. Enjoy. 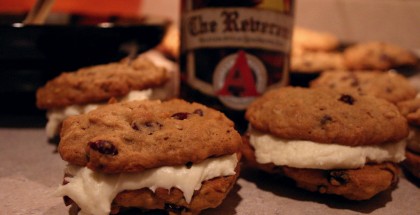