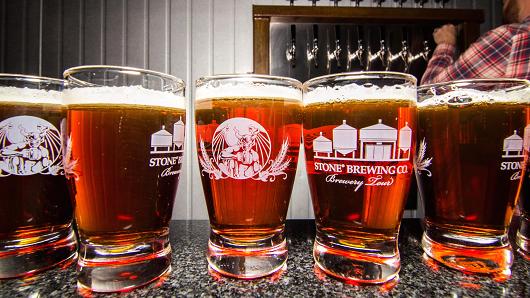 It’s a new week, there’s a new Growler Fill, and I’ve got some major headlines for you. Stone Brewing announced two new brewery locations, Cigar City is ready to set sail on the open ocean, and there is a guy who can pour a beer with his forehead. Keep reading to up your knowledge with the latest craft beer news.

Tristan wrote up an article to get you all filled in on the new breweries that are in the works. Basically, Stone is crowd funding the projects and contributors will have access to special ‘groundbreaking collaboration’ brews, among other things. I’m definitely down to donate money to get my hands on special beers. I also happen to love Stone Brewing and would be willing to support their new ventures across the pond, and across the river. Get in on the action here: Stone’s Indiegogo Crowd Funding Campaign.

Just last week we received a press release with some fantastic news for all of you cruise lovers – Cigar City will now be served on the Carnival Fun Ships based in Florida. This is a wise move for Carnival, as we see more and more craft beer becoming available on airlines, in ball parks, and pretty much anywhere else you can sit, stand, or walk. Starting now, Cigar City’s Florida Cracker Belgian-Style White Ale and Invasion Pale Ale will be available on 13 Carnival ships sailing from five Florida ports. I think it is safe to say Cigar City is one of the best breweries in the South, so it’s no wonder Carnival chose them as the craft beer suppliers for the cruise line. Cheers and congratulations to Cigar City and Carnival!

5 Beer Trends of the Summer

Beer motels, Beer Camp, Sours, etc. Click the link to see what else is in store.

As domestic sales decline for MillerCoors, Pete Coors (the CEO) ponders craft beer, earnings, and life (as you can see in the picture). He states that many bars are replacing Coors taps with craft taps and just keeping a few bottles of Coors in the cooler for folks who still like that stuff. Looks like you better start investing in some smaller craft breweries, dude.

People of Delaware heading to the Beach…to Drink Craft Beer

With breweries like Dogfish Head, Burley Oak Brewing Co, and Twin Lakes Brewing Co, why wouldn’t they? Instead of going to the shore to eat freshly caught crab and lobster, the folks in these parts are heading to the brewpubs to sip on freshly poured brews. Even some non-beer drinkers are being converted. Welcome to the craft beer revolution.

Look What This Guy Can Do….