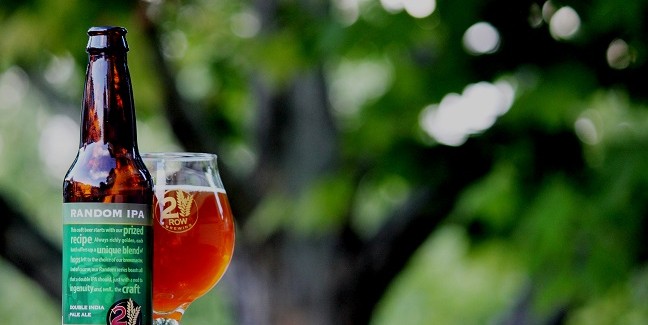 2 Row Brewing is one of Utah’s newest and hottest craft breweries. The brain child of craft beer couple Brian and DeDe Coleman, 2 Row opened its doors on June 19, 2015 to a thirsty Utah craft beer scene. Brian spent years honing his skills in the thriving home brew community. Perfecting his craft, he introduced four solid beers to the world. One of these: Random IPA.

First of all, random our ass! This one seems awfully calculated. Crack the top and your nose is greeted with the electric aroma of pine and citrus zest, proof this DIPA has character. While transferring into the glass, liquid coating the sides, Random drizzles into a light golden color. You’re rewarded with a consistent zap of an unadulterated flavor flowing methodically through this hop party in a bottle. Sporting seven different hop varieties per barrel, the combinations are both endless and alluring for a hop lover. In other words, Random IPA is a win/win. 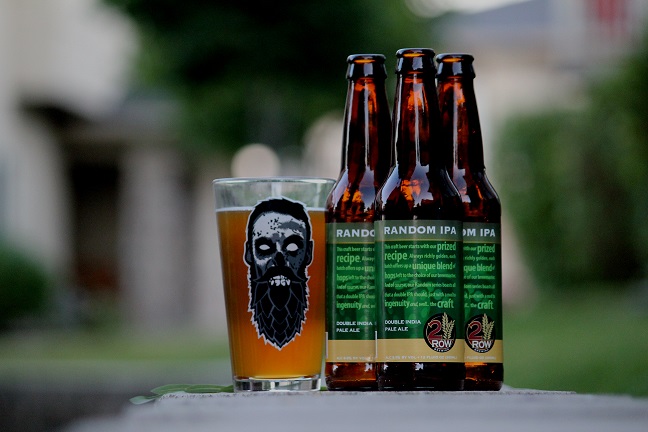 Instead of us hogging all of the air time, we asked Brian to chime in about the beer and more:

PD: What made you decide to develop a beer with rotating hop combinations?

Brian: As a new brewer, finding hops can be a very difficult task. Many of the hop varieties are nearly impossible to get without contracts. There are secondary markets that if you watch closely, and are quick enough, you can obtain some of these varieties… for triple the price. This was our way of being able to change it up as needed so the consumer knew when it changed. We have so far been very lucky to get all the hops we have needed. (Some aggressive tactics have helped that – like driving to the hop brokers in Yakima, WA and camping out) Hop contracts can take 2 years before there is any guarantee and it is difficult for a brand new brewer to forecast our hop needs.

PD: What if we really end up enjoying a certain version, are there plans to cycle through the recipes?

Brian: Yes, as hop supplies permit, we will re-brew the popular versions. We are releasing one more batch of Recipe #1 and I have some Mosaic and Simcoe to put in Recipe #2. I love #1, but excited to change it up.

PD: You launched with 4 really solid brews (24k Blonde, Accelerator IPA, Dangereaux, & Random). What other styles are you excited to work on in the future?

Brian: We are currently working on a 7% ABV porter and will be working with local coffee and chocolate companies as a collaboration brew. I have some great recipes I would like to brew when we get more fermentation tanks. And imperial stout, Biere de Garde, red rye IPA and maybe another farmhouse style beer could be in the future at 2 Row.

PD: What is your favorite thing about working with your wife?

Brian: DeDe has been very supportive of not just my craft beer obsession, but all of my hobbies and business ventures. The best thing about working with my wife is that she puts a woman’s perspective on things. Without her, it would be obvious our brewery only catered to the male beer geek. Craft beer has been part of our life since we both can remember. We served a keg of Wasatch beer at our wedding when they were just a few years into business.

PD: How has the reaction been for 2 Row?

Brian: The reaction has been awesome! I think the line we had at the recent Utah Beer Festival has been evidence that our state is thirsty for new beer. We had 2 volunteers planned to help us pour beer in 2-3 hour shifts throughout the day. The ones that were scheduled to start early ended up working the entire day and by the end, we had 10 people pouring as fast as we could. We even took over the tent next to us after the other brewery ran out of beer. Pouring from both tents was helpful, but the line never slowed.

Thanks Brian and DeDe! For the record, we witnessed the thirsty masses flocking to the 2 Row tent first hand!