Such is the case for two popular Urban Chestnut Brewing Company beers. Hopfen made its debut back in 2011 and quickly became among the most popular of UCBC’s beers. In 2012 Dorfbier debuted, and it too was quickly embraced by the local and national beer loving world.

Now, in 2016 both beers have graduated to the top of the class. Both beers have been selected by UCBC to become the latest now available year-round. Both will now be in 4-packs and on draft year-round! Hopfen and Dorfbier join the ranks of Zwickel, Schnickelfritz, STLIPA, Winged Nut, Apotheosis, and Fantasyland, expanding UCBC’s year-round selection to eight beers.

An India Pale Lager, Hopfen is brewed and dry-hopped with a variety of Hallertau ‘Hopfen’ instead of the usual and more citric hop varieties of most American IPAs, giving this beer a decidedly German twist. Although it’s now referred to as an IPL instead of an IPA, Hopfen is still the same beer!

In the glass Hopfen has a nice dark golden hue.  The head is thick and soapy and hangs around long enough to stick to your lip. Get your nose in there and you’ll get hints of citrus, herbs, peppers and spice.  On the tongue, the herbs and spice give it that “German twist,’ as it will drink more like pilsner.  cks and on draft year-round! Hopfen and Dorfbier join the ranks of Zwickel, Schnickelfritz, STLIPA, Winged Nut, Apotheosis, and Fantasyland, expanding UCBC’s year-round selection to eight beers.

Some refer to the Dunkel style as the original bier of Munich and its surrounding villages (Dörfer.) This everyday bier ranges in color and sweetness depending on the amount of Munich and roasted malts used. The sweetness of the malt is then balanced by the use of another Bavarian friend…the Hallertau hop…in this specific case, Hersbrucker, grown near Wolnzach, Hallertau.

In the glass Dorfbier has copper brown hue. The head is bone to brown-white about a 1/2 to 1/4 inch thick. In the style of a Dunkel, Dorfbier’s bouquet gives you sweet and caramel malt and dry hop.  Starts off doughy and earthy, yet sweet, and drinks smooth. 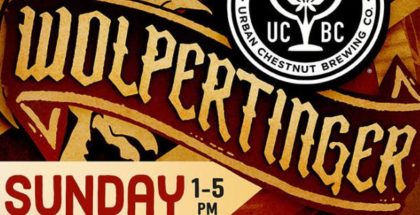 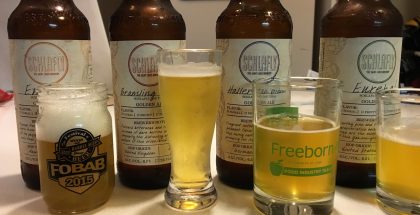