Getting ‘canned’ has never felt so good. Especially if you’re a fan of Civil Life Brewing Company‘s American Brown, one of their most popular brews.

Starting on Tuesday, Civil Life kicked off their inaugural canning of American Brown and made the cans available for purchase, right off the line. Cans will be available until they are sold out.

“I would say rush right down even though it is unlikely we will sell out that day,” wrote Jake Hafner in a brewery newsletter.

Hafner also clearly has the Olympic spirit and has issued what they’re calling the Gold Medal Olympic Civil Life challenge. If they’ve sold out of all cans of American Brown on Tuesday they will discount their Imperial pints of beer to $4.00 and our 1/2 pints to $2.00 till the end of the Olympics.

For many St. Louis beer lovers, American Brown has become a local staple and city wide favorite. The legend behind it is not as well known, but well documented on the brewery blog.

American Brown, was already a thought even before the brewery debuted in 2011 and was among the very first of these beers created by the Civil Life Team. Created in a head brewer Dylan Mosley’s basement, he and Mike Bianco “poured batch after batch of brown ale wort through an elaborate system of mash tuns, brew kettles, carboys, alembics, retorts, and genie bottles.”

Like anything good, patience was their virtue and eventually the first Civil Life beer was perfected and the rest, as they say, is history. 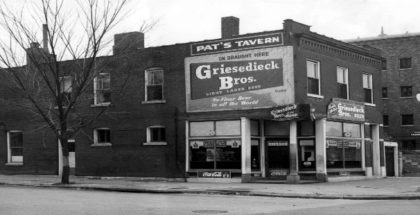