In my experience, there has been no brewery to grow faster from its amazing quality and devoted fanbase than The Veil Brewing Company. Thirsty audiences would flock across the state to Richmond every Tuesday to get their hands on The Veil’s collection of canned jewels. Those of us familiar with the East Coast trading scene would see The Veil’s collection of juicy, New England-style IPAs to give them a breakthrough of success on the level of Lawson’s Finest Liquids in Vermont or Tree House Brewing Company in Massachusetts.

The epicenter of this Virginia phenomenon is the company’s head brewer, Matt Tarpey. Tarpey has built a new craft beer capital from his experience starting at O’Connor Brewery in Norfolk, Virginia and moving on to The Portsmouth Brewery in New Hampshire. His burning tenacity to learn gave him the opportunity of a lifetime volunteering with the living legends at The Alchemist and Hill Farmstead. To top the experience of his craft, he even interned at Cantillion to learn the techniques of European brewing styles. A resume like that would make anyone in the craft beer community tremble in awe.

The methods Tarpey learned defined his beer catalogue by using the unique fermentation method called koelschip (where wort is poured over a large flat surface and exposed to wild yeast as it cools). Thanks to the brewery’s 500+ barrel space and self-distribution system, The Veil releases two to four beers a week. A special few of these beers are regularly canned but every single recipe is guaranteed to come out with some type of funky variation with fruits or no hops at all! But what will be to many Virginians’ surprise, my favorite beer from The Veil is the beer I’m showcasing today: Child Support. 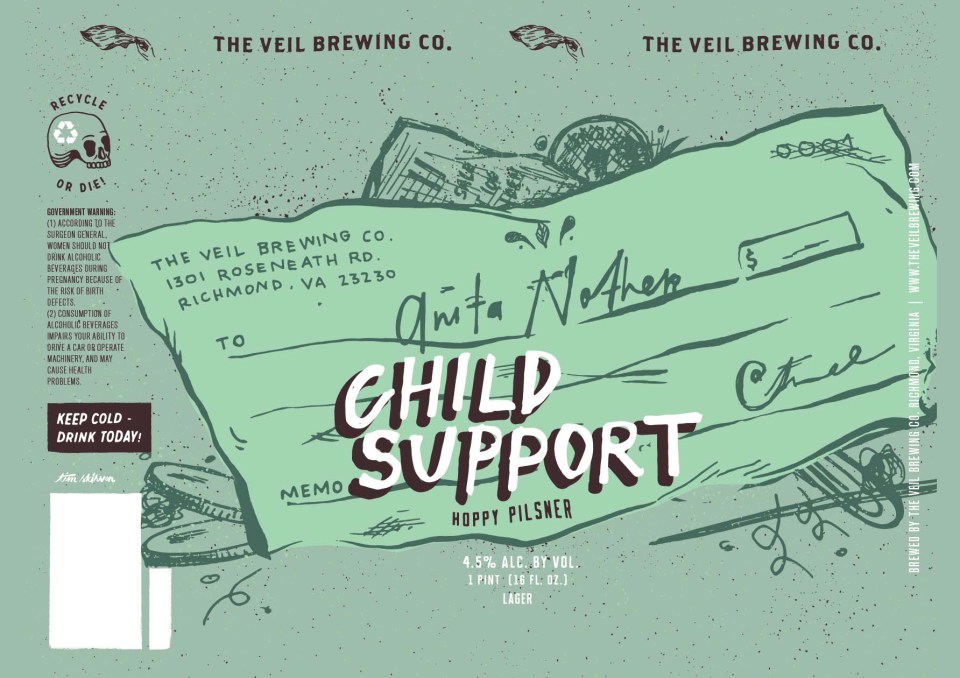 Child Support is an unfiltered, hop-forward Czech pilsner. This is the third batch of Child Support, which uses a heavy whirlpool and late-addition dry hopping of Amarillo hops. For comparison, the first batch used Citra and the second batch used Mosaic. Many people flock to The Veil’s hoppy juice boxes, but the quality of a brewery really sings to me when you can make a lager of this caliber.

The pilsner pours like a glimmering topaz from its clear body and gentle foam. I’ve never had the other batches of Child Support, but the Amarillo brings out a lovely flowery quality you’d want in the noble hops of other pilsners. You get a gentle, pure orange aroma where the zest has been extracted of all of its oils and placed in this beer without the heaviness of pulp or pith.

I was immediately astounded when I discovered how the mouthfeel and body were perfectly in sync. You can crush it instantly like an ideal lager or gently sip to enjoy the beer’s bitter orange notes. The hops are kept in balance as to not overpower the natural softness of the pilsner’s decadence. Whenever people ask for lagers with more diverse flavor, this is the absolute perfect option. The Veil uses hops equivalent to the way a master chef seasons a five-star stew.

Child Support is the best pilsner in Virginia without a shadow of a doubt. I regret not picking up more four-packs when I visited this brewery last month as the quality did not drop at all. People often reach for the flagships of Master Shredder or Crucial Taunt when visiting The Veil, but their greatness is epitomized in this one-of-a-kind beer. Hope to see you all there the next time this beer is released because I will certainly make the trip to buy some.