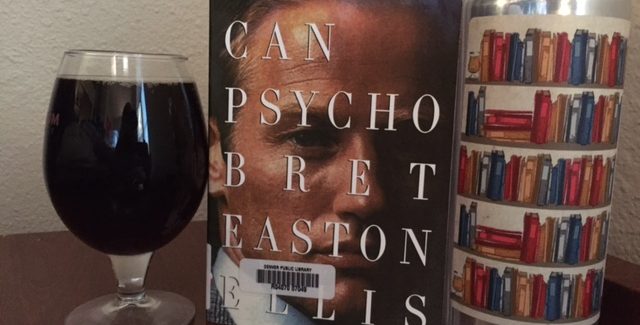 Patrick Bateman was a 26-year-old, handsome man who worked on Wall Street. He was intelligent, wealthy and he attracted the finest of women. His charming and sophisticated nature makes an average man like myself jealous we don’t have the same qualities… except for the fact that he is also a psychopath. The other half of his life is spent strolling around during the night with ferocious psychopathic tendencies. Bateman is the protagonist in American Psycho by Bret Easton Ellis. Always looking for a great book to read, several years ago I had heard great things about Ellis so decided to read the book. Half way through, my literary appreciation was blown away both by the quality of writing and character depiction but also the shock value of a dark and bleak story.

Recently, I was at Fiction Brewing Company admiring their tap list. I am a certified book nerd (at least I pretend to be). So, when ordering, I often choose according to the book that provided the inspiration. Immediately, I saw This is Not an Exit (inspired by Bret Easton Ellis’ American Psycho) and asked for a crowler to go so I could drink it in my favorite chair while refreshing my memory of this disturbing novel. Only after ordering did my excitement escalate when I realized it was a Belgian strong ale with roasted hatch chilies. I was in beer nerd/book nerd heaven.

Similar to Bateman’s nightlife, this beer is dark, although in color not personality. It doesn’t resemble something a psychopath would drink but is super smooth which could lead to somebody forgetting it’s a wonderful 9.5% ABV. It is brewed with Belgian pale malt, roasted barley, caramel malt and Belgian dark candy sugar. The roasty malt taste is complemented by chocolate notes and perfected by the subtle taste of roasted chilies. It was dry-hopped with New Mexico Hatch chilies giving the characteristics of a late autumn beer, but one that I could drink year-round.

American Psycho is described as ferocious, ambitious and inspiring. I would describe it as dark and psychotic, but great American literature. It is definitely a book to read in sections for discussion with the pleasure of others. In a similar style, this beer exemplifies greatness and I find myself wanting to discuss it with friends. There is artistic and brilliant complexity to both author (Bret Easton Ellis) and brewer (Ryan Kilpatrick). I highly recommend both to anyone who appreciates great books and/or craft beer. I can see why a smooth-talking, good-looking, psychotic Wall Street man inspired this smooth but taste-craving beer.