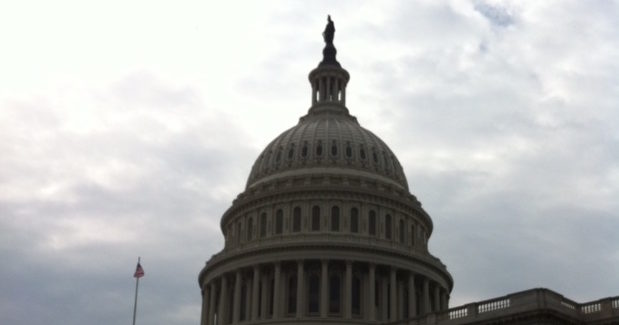 Coinciding with the Craft Brewers Conference, DC Brau has developed six special-release collaboration beers — to be released Tuesday, April 11 at a tap takeover — with brewers across the country. They’ll also be co-hosting a heavy metal concert with BARONESS at the 9:30 Club on Wednesday, April 13.

(To those avid Wikipedia fans, yes, DC Brau was established in 2009 but did not send its first beers to market until 2011.)

The (free!) tap takeover kicks off at 5 p.m. at Jack Rose Dining Saloon in Adam’s Morgan, a well-known bar with a large whiskey selection, great bar food and a seasonal tiki bar. This is a bit of a hike from the Convention Center, where CBC will be located, but in an area near a ton of fun establishments.

Here’s the line up of collaborations, straight from the press release DC Brau issued:

This Belgian farmhouse IPA exclusively uses Citra and Simcoe Hops, and will be available in cans designed by Matt Leunig (scrapedknee.com).

The 7.5% ABV Imperial Pilsner is brewed with traditional German hops with an emphasis on aroma contributed by German Saphir hops. It will be available in cans designed by Mike Van Hall (opprobriations.com).

This yet-to-be-named beer is a straight-forward American Pale Ale showcasing domestic hop varieties that were grown in Michigan at Hop Head Farms. This beer will showcase new aroma varieties, Cashmere and Grungeist, which (as rumor has it) could be the next “big aroma varieties” for the U.S. and European markets. This beer will only be available on draft.

This German-inspired IPA used locally-grown spelt and malted rye supplied by Deer Creek Malthouse. In addition to locally grown malt, we used locally grown Cascade, Chinook and Comet hops in the whirlpool for added hop aroma. This beer is basically a hoppy German-Style Maibock, which was brewed under the watchful (cross)eye of their brewery’s cat. This beer will only be available on draft.

This German-style Altbeir was brewed using one type of Munich malt for the base malt of the beer in conjunction with German hop varieties, Hallertau Blanc and Hüll Melon, which are very unconventional in this style of beer. This beer will only be available on draft.

Brewed in partnership with REI, proceeds from this locally made session IPA will be donated to the Washington Area Bicyclist Association (www.waba.org).

Here are the details on the 9:30 Club event; the venue is also a mainstay in the DC entertainment scene, so if you’re in town for the week, it’s worth a trip.

DC Brau has big plans in store for the next few years, including dramatically increasing its production with a new brewhouse. Keep your eyes on this one, even six years later.