What better way to symbolize the greatness of craft beer than relating it to one of history’s greatest children’s book authors? Recently I picked up a six-pack of Dry Dock Brewing Co.’s newest beer Dry Dock IPA. My attention was immediately drawn to a quote on the top of each can. I had been reading Dr. Seuss to my 4-year old son so, naturally, I connected the two.

Dr. Seuss’s story Yertle and Turtle tells the story of Yertle “King of the Pond.” In the story Yertle is dissatisfied with the stone he sits upon so decides to build a throne made out of countless stacked turtles. Ignoring the pain and suffering of some poor turtle named Mack, he continues to insanely stack turtles with the desire to reach the moon. This is short-lived, however, as a small burp from Mack causes the throne to collapse leaving Yertle “King of the Mud.” All the other turtles, including Mack, celebrate in seemingly drunken delight.

“We’re really excited to add Dry Dock IPA to our Home Fleet,” says Dry Dock Head Brewer Alan Simons. “It’s unfiltered and crafted to showcase specially selected, fruit forward hops. This beer has quickly become a favorite of the entire production crew and we hope everyone enjoys it as much as we do.” – DryDockBrewing.com

If Yertle had been drinking a beer maybe he wouldn’t have been so cruel and self-centered. Mack’s burp may have been the result of his prior activities guzzling a few cold ones. As a result, we can obviously see who the smartest turtle is. Dry Dock’s depiction of a sea turtle on the cans of their newest year-round beer definitely reminds me of Mack’s calm but party like personality.

Dry Dock IPA, the brewery’s newest year-round addition, is down to earth with New England-style hops. It premiered about a month ago before being distributed in cans throughout Aurora, Denver and surrounding cities. Dry hopped with mosaic, Ekuanot and exotic hops, it is fruit forward with hints of mango, peach and pear. It is unfiltered, beautiful dark golden color and exemplifies the uniqueness and quality that is sure to make this beer a favorite addition to their home fleet.

Dr. Seuss is one of the brightest and creative minds to ever live. His knowledge can relate to society as if he wrote them yesterday. The quote on the top of the can reads, “And the turtles, of course… all the turtles are free, as turtles and, maybe, all creatures should be.” –Dr. Seuss. His quotes continuously inspire people, especially on the front of an awesome can of beer. 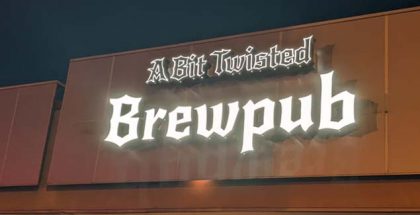