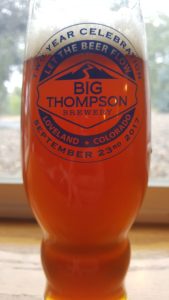 Otto’s Oktoberfest is the perfect blend of hefty beer for the colder months and an easy drinker that could potentially turn into three or four pints. A gorgeous dark copper reminiscent of caramel, this beer is the quintessential color of what you would imagine from a marzen. The smell is a deep, roasty aroma with plenty of malt and a hint of sweetness that’s hard to find elsewhere. You may take it for a dunkel immediately off the nose, but the marzen roots of this brew shine through.

Otto’s pours with a very nice froth and forms a great head of foam that quickly settles to reveal the beer itself. The taste is smooth and pleasant. A rich, roasted taste, the maltiness is balanced and sits on your palate. It has the heaviness to get you through the sudden drops in temperature, but you can certainly have more than one without regret.

Big Thompson is only a couple of years young, but they are sure to stick around with annual treats like Otto’s Oktoberfest. Be sure to check them out on Facebook & Instagram and stop by their taproom for a pint or growler of this wonderful German-inspired beer!