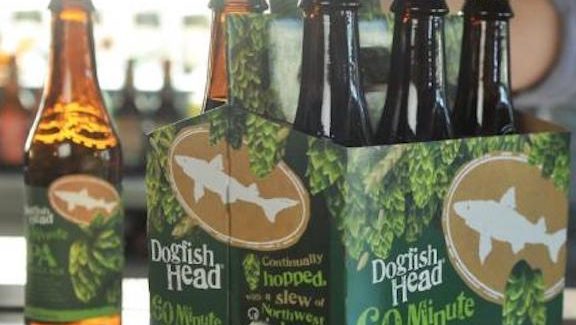 Dogfish Head’s 60 Minute IPA is a gateway beer, is replicated by other IPAs, is a perfect choice to bring to a party, can be enjoyed year round and in nearly any setting. I’ve had this beer at company holiday parties, at house parties and at a restaurant on early dates with my now-husband.

It’s astounding that a small brewery in Delaware — not Colorado or California or even New York — took off in the 1990s and remains successful and innovative. This success is firmly rooted in Sam Calagione, Dogfish’s founder and president, but also because the product is simply consistent and enjoyable.

It’s trite to say the beer is balanced, but it certainly is. It’s a deep gold on color, has a solid lacing and carries a bit of pine/grass and herbs on your palate. It finishes clean and dry and with a lower ABV, you can have more than one with confidence.

To get a taste of the beer without having some in your fridge, hear it from Dogfish’s Calagione himself in a YouTube clip.

The cheese pairing that Dogfish recommends is a vintage cheddar; grab some pretzels and beer cheese and you’re set. The beer is available in 12-ounce bottles, 12-ounce cans and then also fun 19.2-ounce cans.

This beer has gone far in its 15 years, parallel to the path of Dogfish Head at large. The company distributes in 40 states plus Washington, D.C., and growth should be expected, with innovative work like their Dogfish Inn and expansion in tasting rooms and dining.