As the Great American Beer Festival continues to grow in size, and popularity throughout the years, so has the week surrounding it. For those familiar to the country’s largest beer festival, often times the external events happening outside of the festival have drawn equal, if not greater interest, due to the quality of breweries lined up, and/or the unique approaches taken by organizers.

That said two of the most popular and iconic events that have emerged during that week for the past two years have announced that they won’t be taking place this year, if ever again. Earlier this week Crooked Stave Artisan Ale announced via their Facebook page, that after six years of hosting the What the Funk?! Invitational, the would be postponing the event. 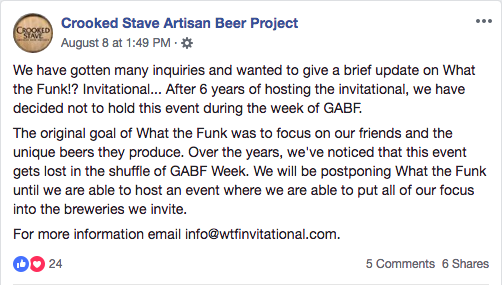 Additionally, PorchDrinking has learned that Beers Made By Walking, the iconic festival which featured beers inspired by locally foraged ingredients, has also been discontinued for the unforeseeable future. And while the festival organizer did not want to officially provide further comment, they have verified that the event would not be happening in 2018.

While the week itself will be missing two tentpole events, festival-goers won’t be short of amazing beer. Most of that week’s programming has just begun getting announced, but we already know Melvin Brewing has a concert planned with members of Wu Tang on Wednesday, Sep 19, Epic Brewing’s 50 Firkin Fiasco returns Thursday, Sept 20, Denver Rare Beer Tasting will return on Friday, Sept 21, that that’s just the beginning. And of course, the following month, Shelton Brother’s The Festival will come to Denver on Oct 19-20.

Stay tuned to PorchDrinking.com as we’ll be compiling a full list of GABF events, news and pour list previews in the coming month! 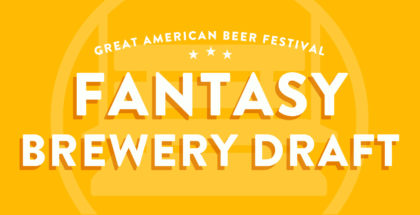