This has been another great year for the home state of the Great American Beer Festival. Colorado breweries took home a whopping 40 medals and two brewery/brewer of the year awards at this year’s GABF. Of the 40 medals, 13 of them were gold medals, 21 silver and six bronze. Without further ado, let’s deep dive into this some of this year’s winners.

Westbound & Down Brewing Co. (Idaho Springs, CO) brought home two silver medals for Double Barrel Louie in the Wood- and Barrel-Aged Strong Beer and Westbound Double IPA in the Imperial India Pale Ale categories. They were also named Mid-Sized Brewpub and Mid-Sized Brewpub Brewer of the Year. Double Barrel Louie was one that they’d undoubtedly put a lot of effort into creating. It’s a Barrel-Aged English Barleywine they aged in port-finished rye whiskey barrels and were then finished in Breckenridge Peach Bourbon Barrels. And yes, it’s as boozy as it sounds, coming in at 11.5% ABV.

It was no surprise that local favorite, WeldWerks Brewing Co. (Greeley, CO), walked away with two medals this year, for two of their well-known derivations of their flagship, Juicy Bits. The Greeley local took home gold for Extra Extra Juicy Bits in the Juicy or Hazy Imperial India Pale Ale category and silver for Itsy Bits in the Juicy or Hazy Pale Ale category. Both beers are incredibly outstanding, clean, and refreshing. Not to mention, deliciously hoppy. Extra Extra Juicy Bits is brewed with just about 14 lbs per barrel of Citra, Mosaic and El Dorado hops. “Despite the ridiculous hop rates (kids, don’t try this at home), this absurdly hopped Double IPA manages to find balance, thanks to the soft, creamy mouthfeel and smooth finish contributed by the white wheat malt, flaked oats, and flaked wheat,” shares WeldWerks, “With notes of tangerine, pineapple, passion fruit, mango, peach, and grapefruit, Extra Extra Juicy Bits is bursting with so much fruit juice character that it makes you question whether or not actual fruit was added (we assure you, no fruit was added).”

Here’s a full list of the Colorado winners from the 2019 Great American Beer Festival: 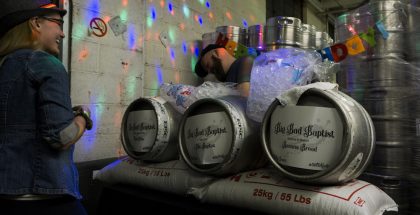