In just about any direction from Chicago, you can do a short drive and experience a fun, beer-filled weekend. About a 3.5-hour drive north of the city and you’ll hit Stevens Point, Wisconsin, home of the Central Wisconsin Craft Collective.

A collection of four breweries, a winery and a distillery make up the Collective group, which spans from the cities of Stevens Point, Amherst and Rosholt, Wisconsin. The Stevens Point Area Convention & Visitors Bureau invited me to experience the full Collective for a 2 Days, 2 Nights feature. 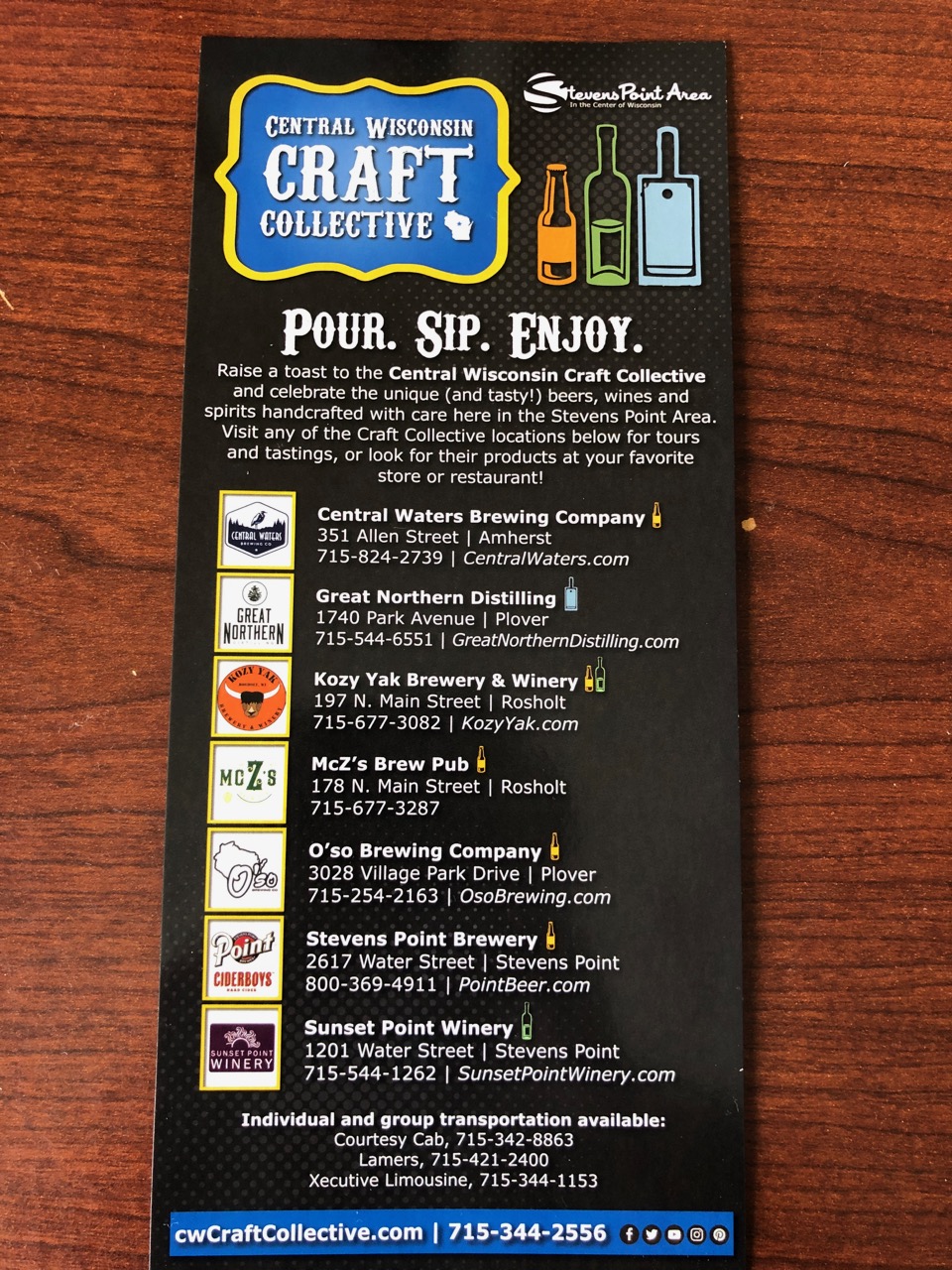 Stevens Point reminded me of a smaller Traverse City, Michigan. With the main downtown area full of small local shops, restaurants and bars sitting on the water, surrounded by hiking trails and other outdoor activities, there’s plenty to do outside of drinking.

The Sunday before we visited the weather was a beautiful 70 degrees. Just a few days later they were hit with a crazy April snowstorm and nearly 9 inches of snow fell over the area. Luckily, the snow had stopped by the time we got up, but the mounds of snow we’re so used to seeing in Chicago after a big snow were noticeable all over town.

It’s definitely possible to do the entire Craft Collective in two days so here’s my guide to a full weekend of great beer, cocktails and wine in Northern Wisconsin. And, if you’re looking for an affordable weekend getaway, this is definitely a great option. Maybe I’m  used to Chicago prices, but pints of beer typically were $4 and meals for two after the tip was never more than $50.

First off, you’ll need a place to stay. You have your choice of Stevens Point or Plover. About 15 minutes south of downtown Stevens Point, Plover is actually closer to more stops on the Craft Collective, including two which you can walk to from your hotel.

To get to Stevens Point and the other areas of the Craft Collective you can either do a Lyft or arrange a taxi or car service, there are a few of them available. Afterall, if you’re going out drinking, the last thing you want to do is drive. 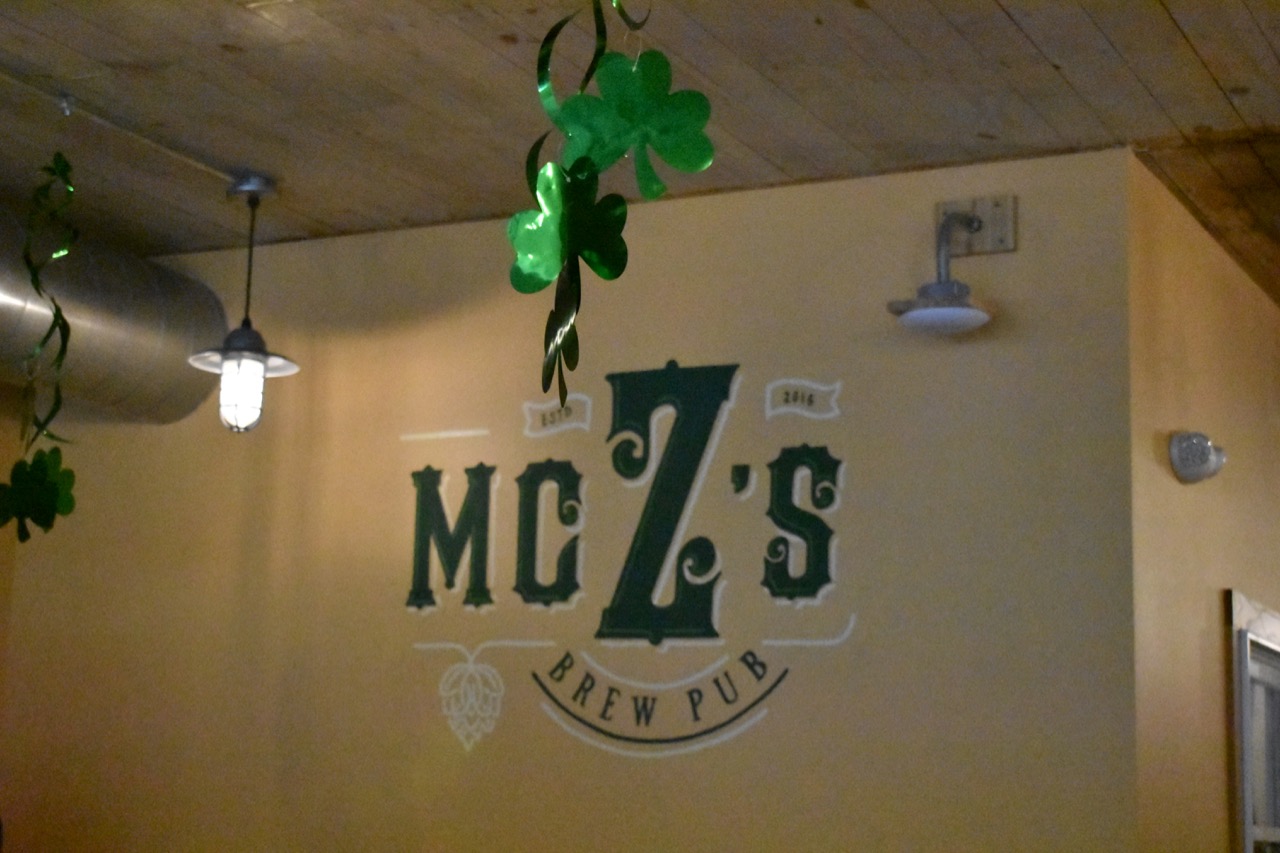 We got to our hotel just before 4 p.m. on Friday. After a quick rest, we made our way to Rosholt, Wisconsin, and McZ’s Brew Pub. This is the farthest drive, about 30 minutes, you’ll have to make for the Collective, but if you want to experience it all, it’s worth it.

Do not depend on a Lyft to get you back from the brewery. Arrange a taxi or car service to pick you up when you’re done.

When you get into the town of Rosholt you’ll quickly realize it’s a small small town. McZ’s sits right in the center of town on Main Street. When we pulled up we had to make sure we avoided the local high school track team that was doing wind sprints down the Main Street, sharing the road with the cars.

The space is warm and inviting. Kate, the owner, has been open for just about two years and it is very community forward. She’s happy to host all kinds of events at the brewpub including bridal shower, charity fundraisers and more. 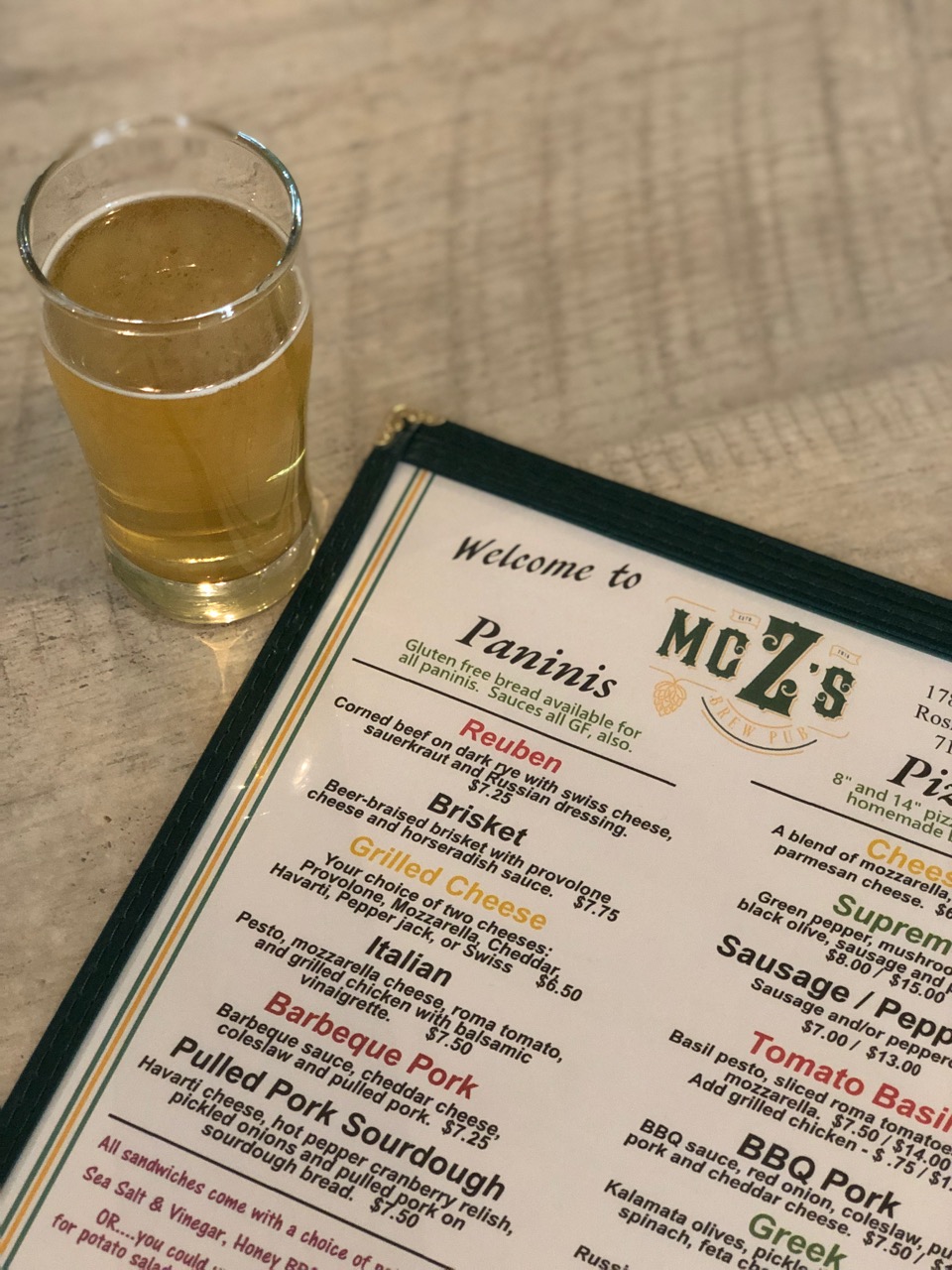 McZ’s itself is a small brewpub. Even though they operate just a two-barrel system that sits right behind the bar, there is a wide variety of beers available. We tried a bunch of them and I’d recommend their Golden Ale and Milk Stout. If you want a more malt-forward IPA you should try it.

A must-try is their pizza. The beer dough is homemade and there are plenty of toppings to choose from. What I liked is that there was a small and large option. The small was perfect for a little snack while drinking. There isn’t a much better combination than pizza and beer so McZ’s was a great way to start our Craft Collective adventure. 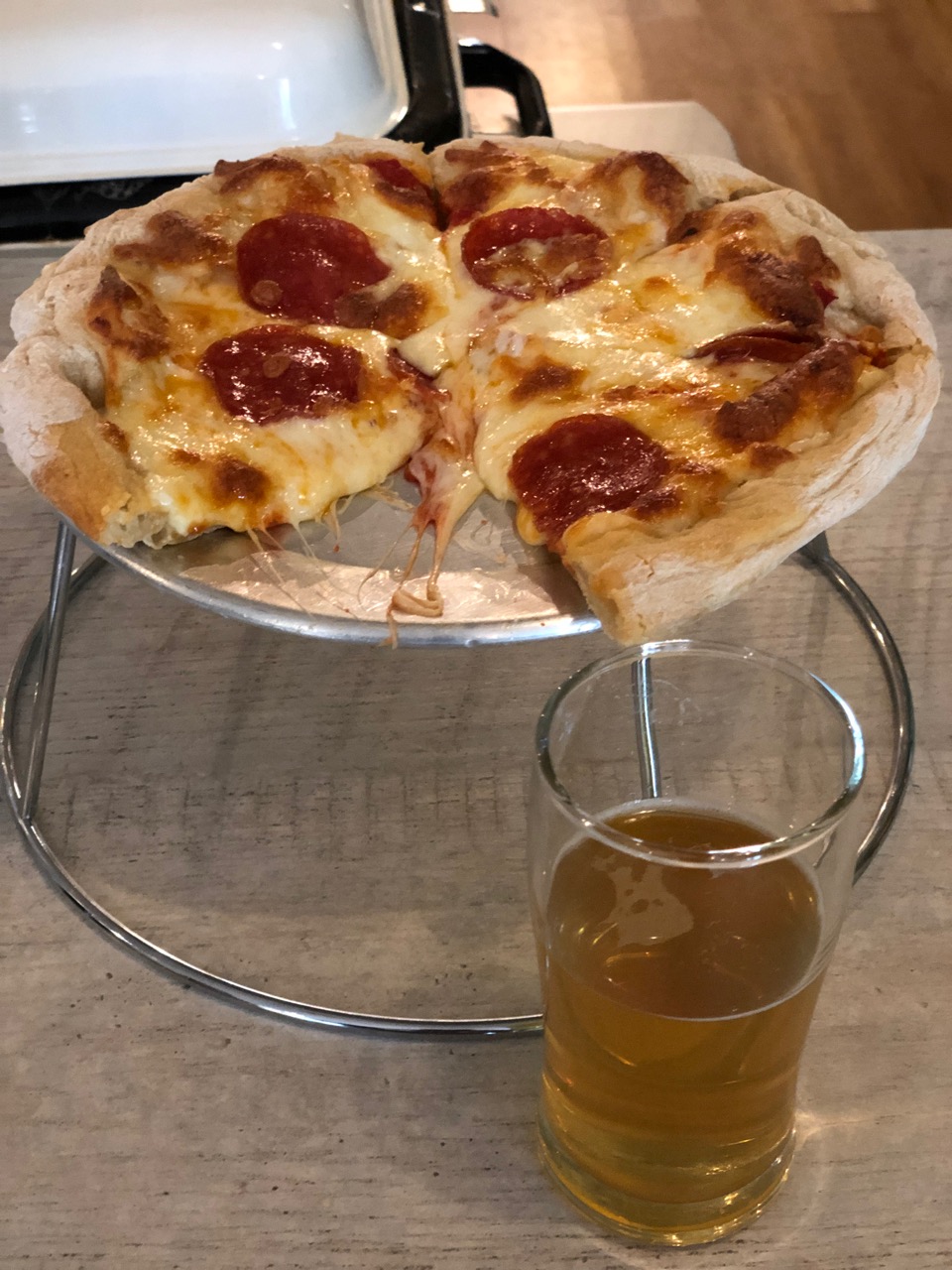 Probably the most well-known brewery in the Collective, Central Waters is just 20 minutes south of McZ’s. The two places couldn’t be more different as you go from McZ’s small in-housetwo2-barrel system to Central Waters, which is a behemoth in comparison. 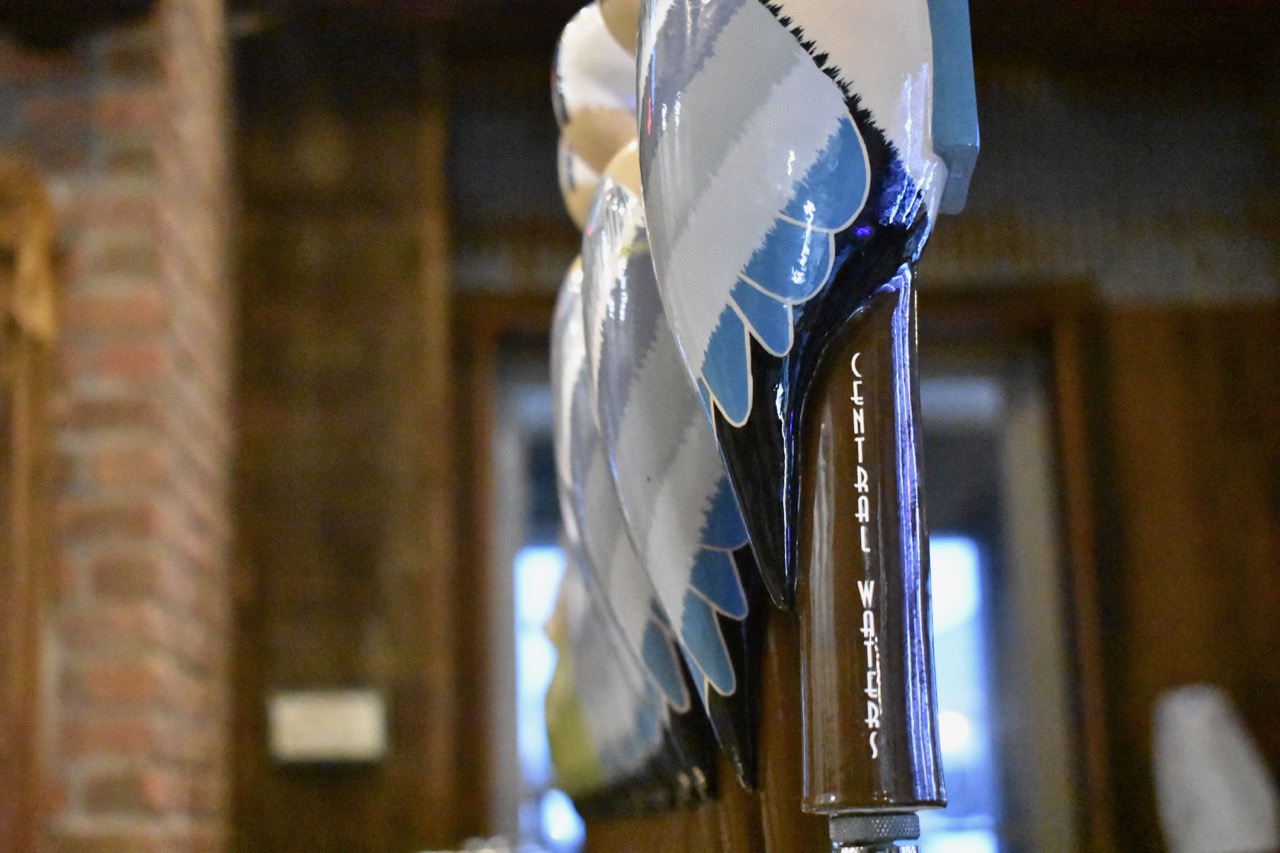 The Central Waters taproom has a big open floor plan, a long bar and plenty of beer. A food truck sat outside and bluegrass duet was playing in the corner.

Central Waters is known for their barrel-aged beers, but they feature a lot of other styles as well. But if you do go, you must try at least one of their barrel-aged beers. There were at least five to choose from when we were there and they also took us to the barrel warehouse located next door to the taproom. Once inside it was endless rows and rows of barrels stacked on top of one another, each one individually labeled and barcoded for easy organization. 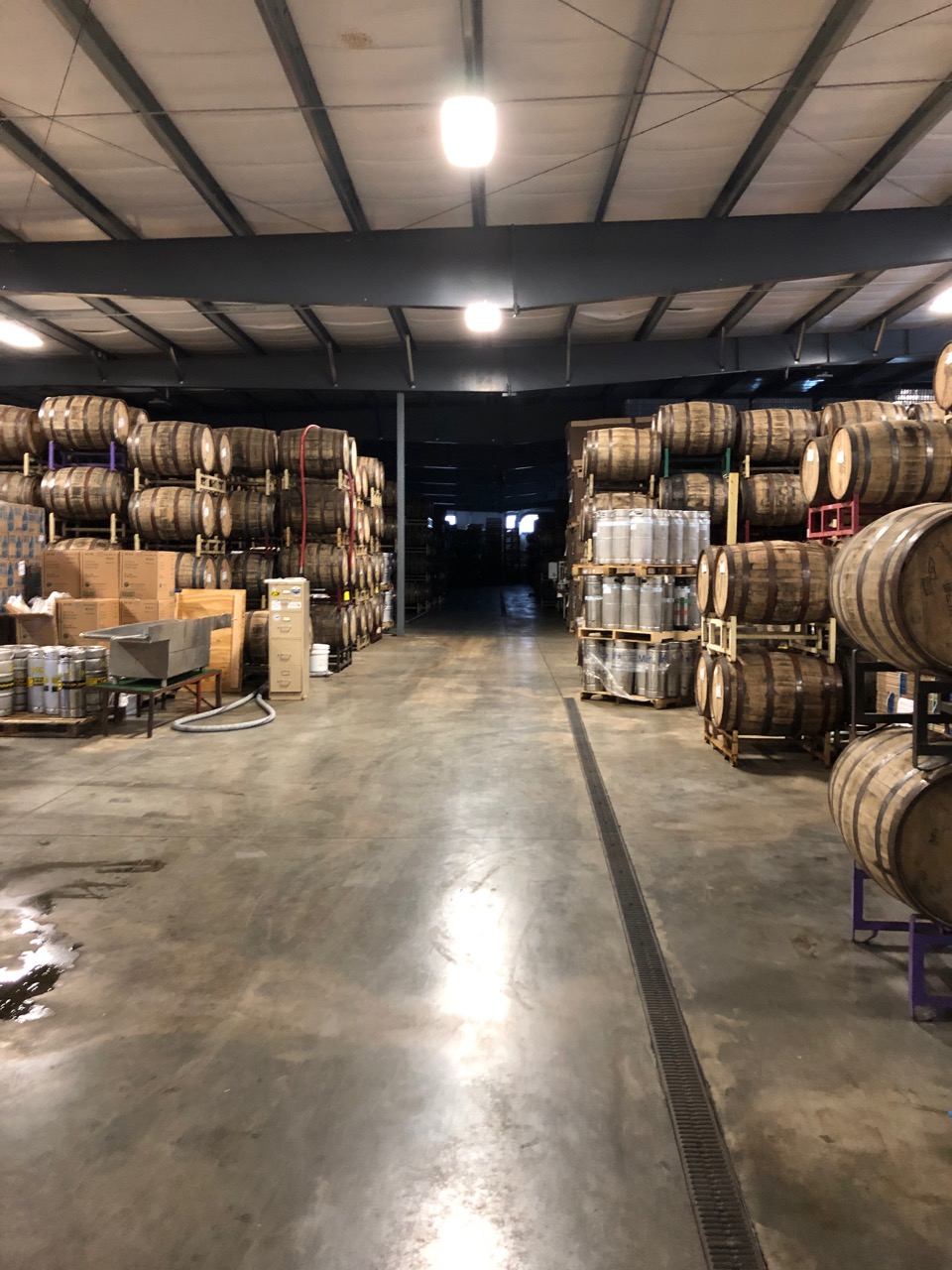 Back in the taproom, I started with a barrel-aged beer, which was delicious. The star of the night was Crew Dive, their Brut Pilsner. Light and clean, the Brut aspect added an additional crispness that was easy to drink and incredibly refreshing. My wife tried both of the hazy IPAs they had on draft and was a fan.

After listening to some live music and having another beer, we headed back to Plover for dinner. 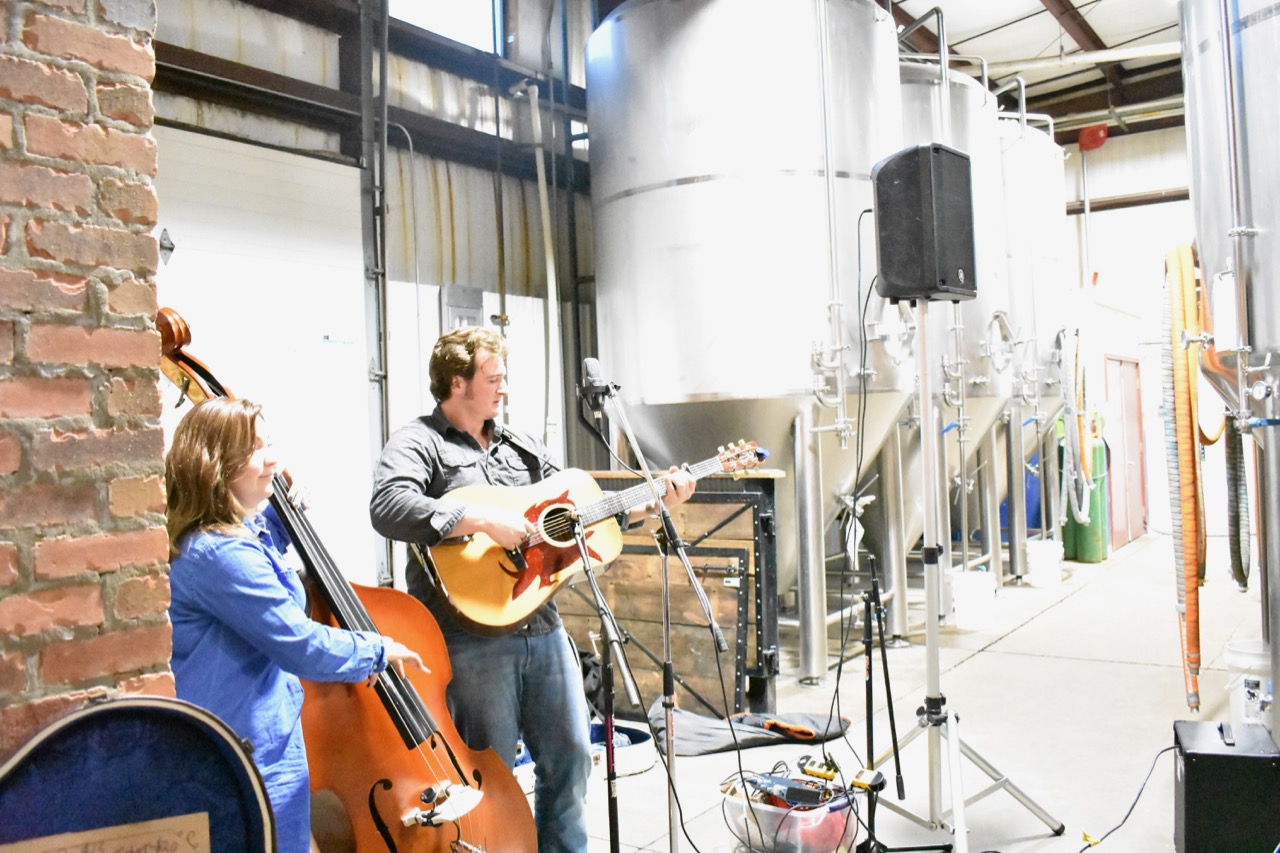 Pretty much in the parking lot of our hotel is a restaurant that the bar manager at Central Waters recommended. Mikey’s looks like your run-of-the-mill bar and grill and it pretty much is, except they have a ridiculous tap list. 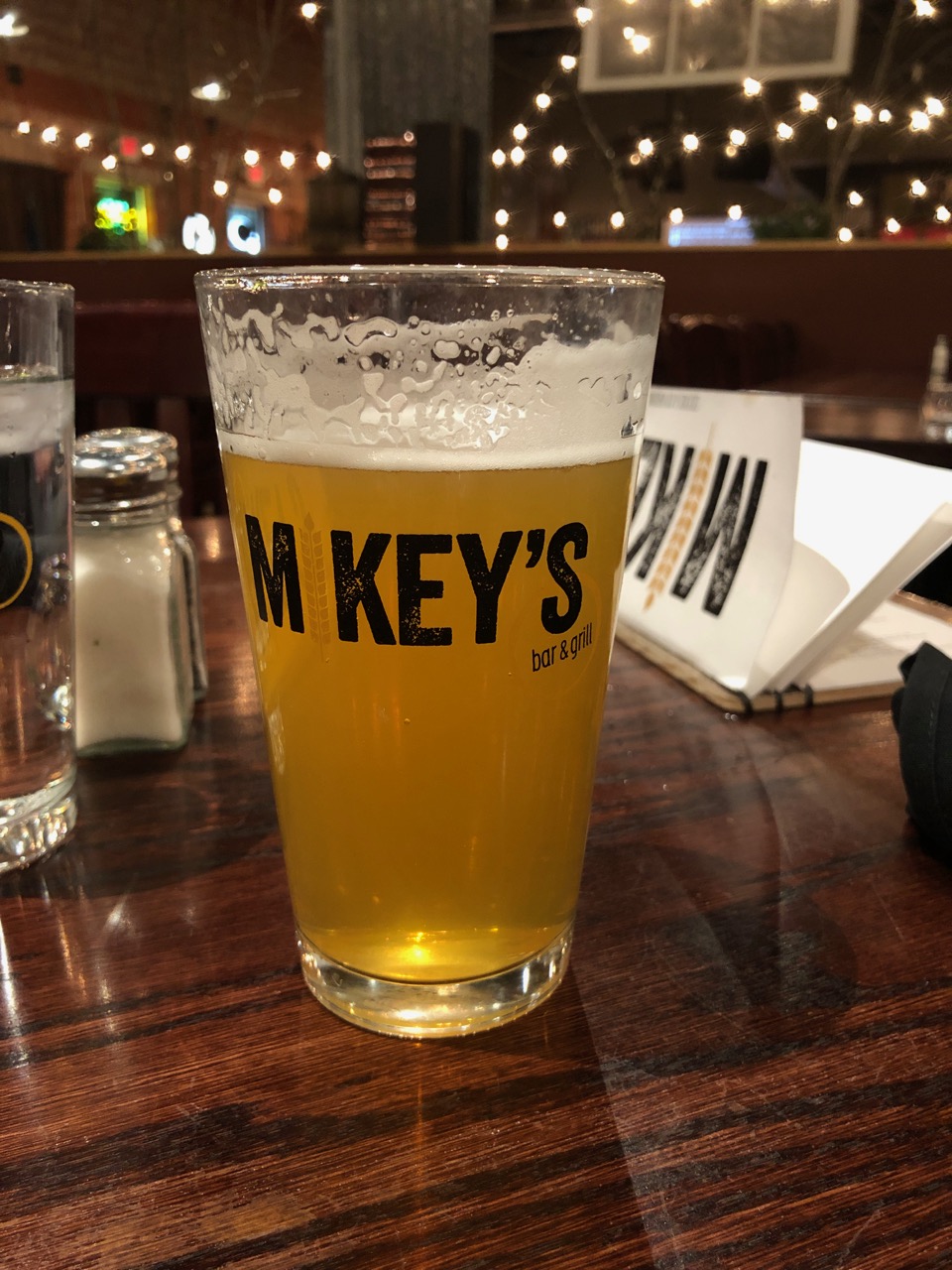 I was almost overwhelmed with the offerings but they had everything from your everyday names in craft beer to some really hard to find ones, especially from Toppling Goliath.

Eventually, I ended up getting a Spotted Cow. I realized I had been in Wisconsin for almost six hours and still hadn’t had any New Glarus.

My first stop of the day was to the second oldest continually operating brewery in the United States sits just minutes away from downtown Stevens Point. 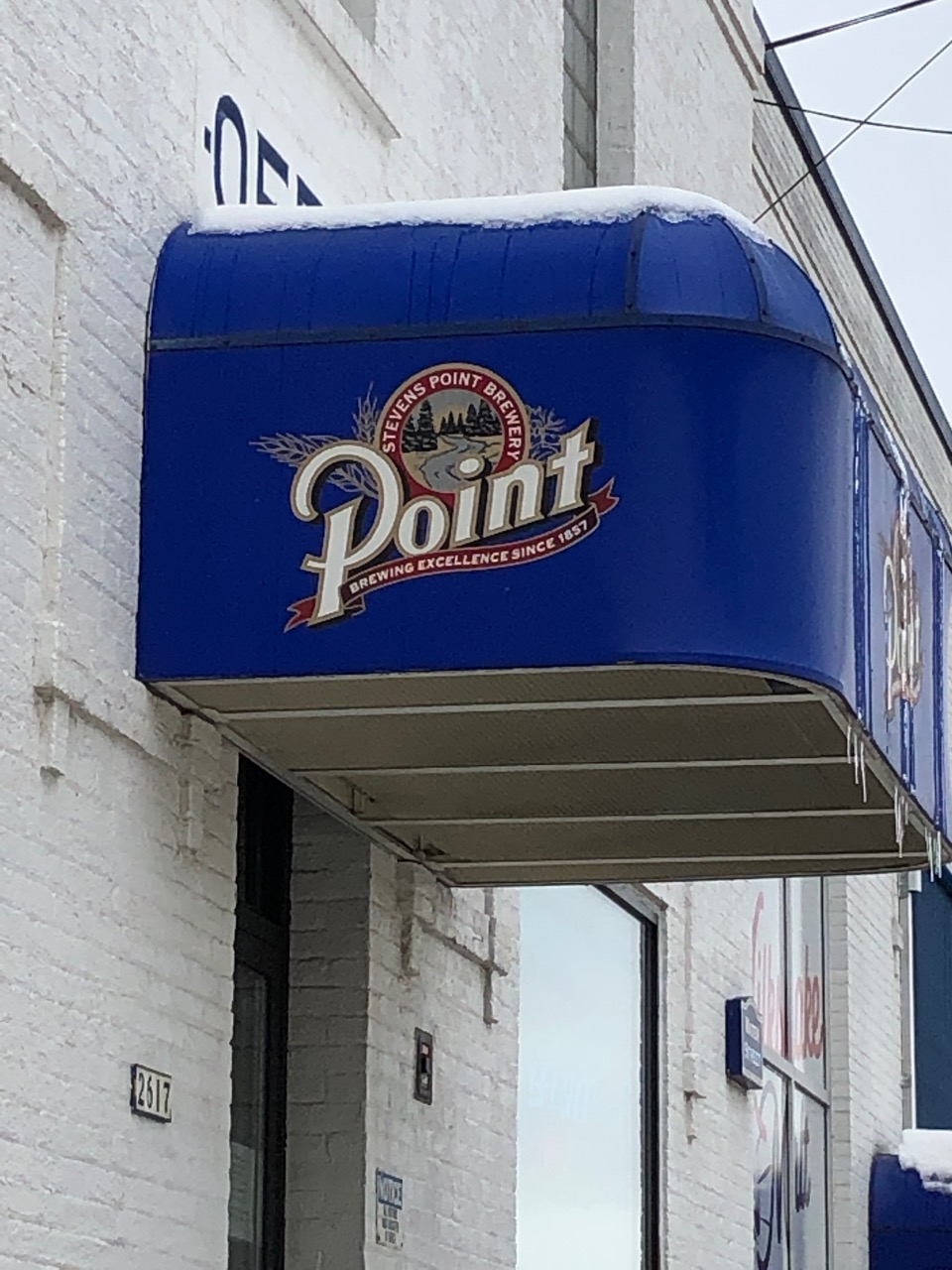 Point Brewery is so old that they served beer to the Union soldiers during the Civil War. The original walls of the brewery are still there today, and while they have expanded quite a bit since then, it is pretty cool to be standing in a brewery that old.

Now, I’m not a huge fan of brewery tours. In fact, I rarely do them. However, with the history that Point Brewery has, I was excited about this one. I should also mention that in order to drink any beer on site at Point Brewery, you have to be on a tour. They have no public taproom.

For just $5 you get a 30-minute tour of the historic brewery and three pours of any of their beers, cider or soda. It’s a great deal and a fun tour, so I recommend it. 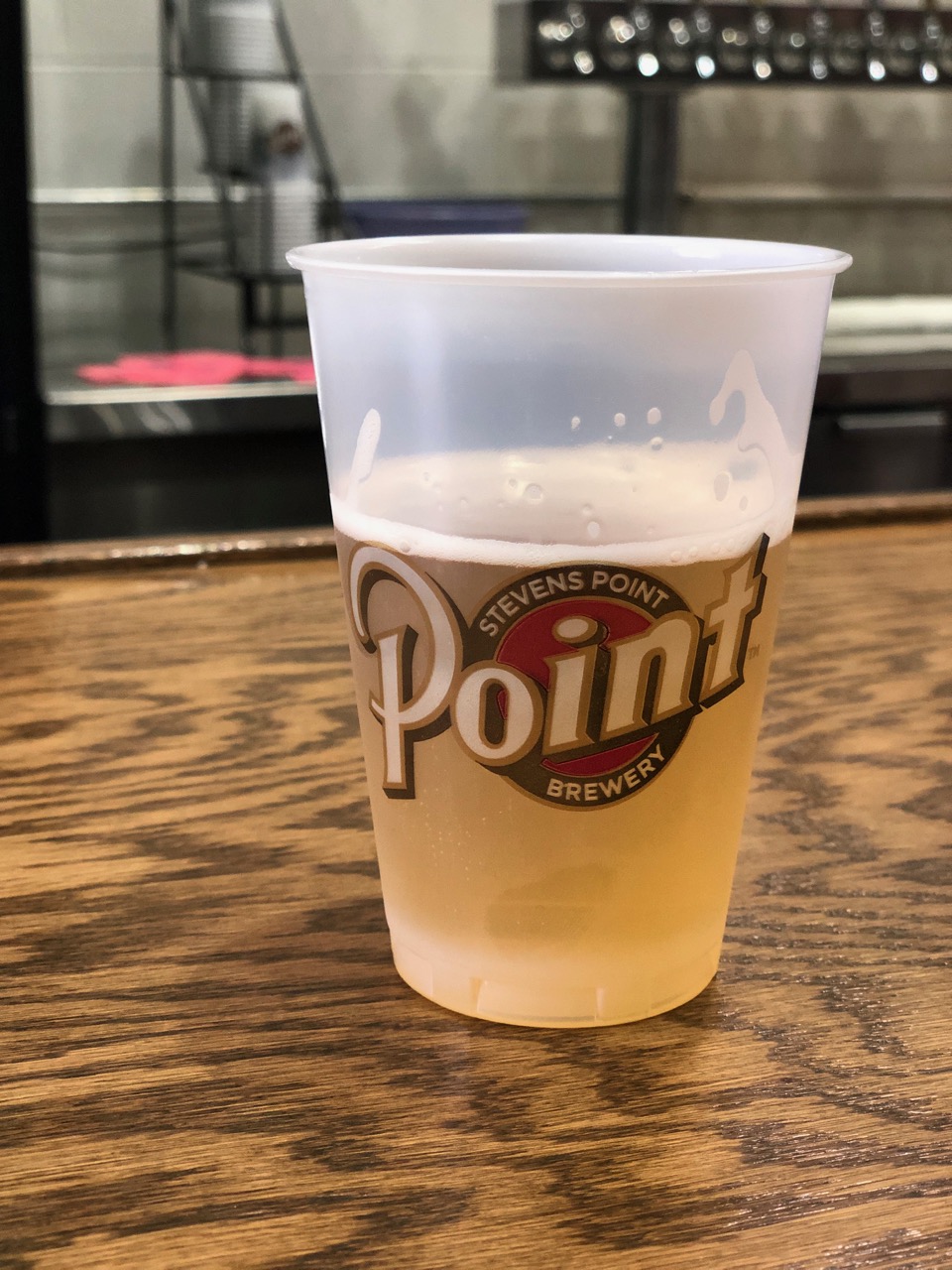 One thing you’ll learn is just how much contract-brewing Point Brewery does. While they have their own line of beers, they make beer for a lot of other breweries.

Ever wonder where Kirkland Brand (CostCo) beer comes from? Point. 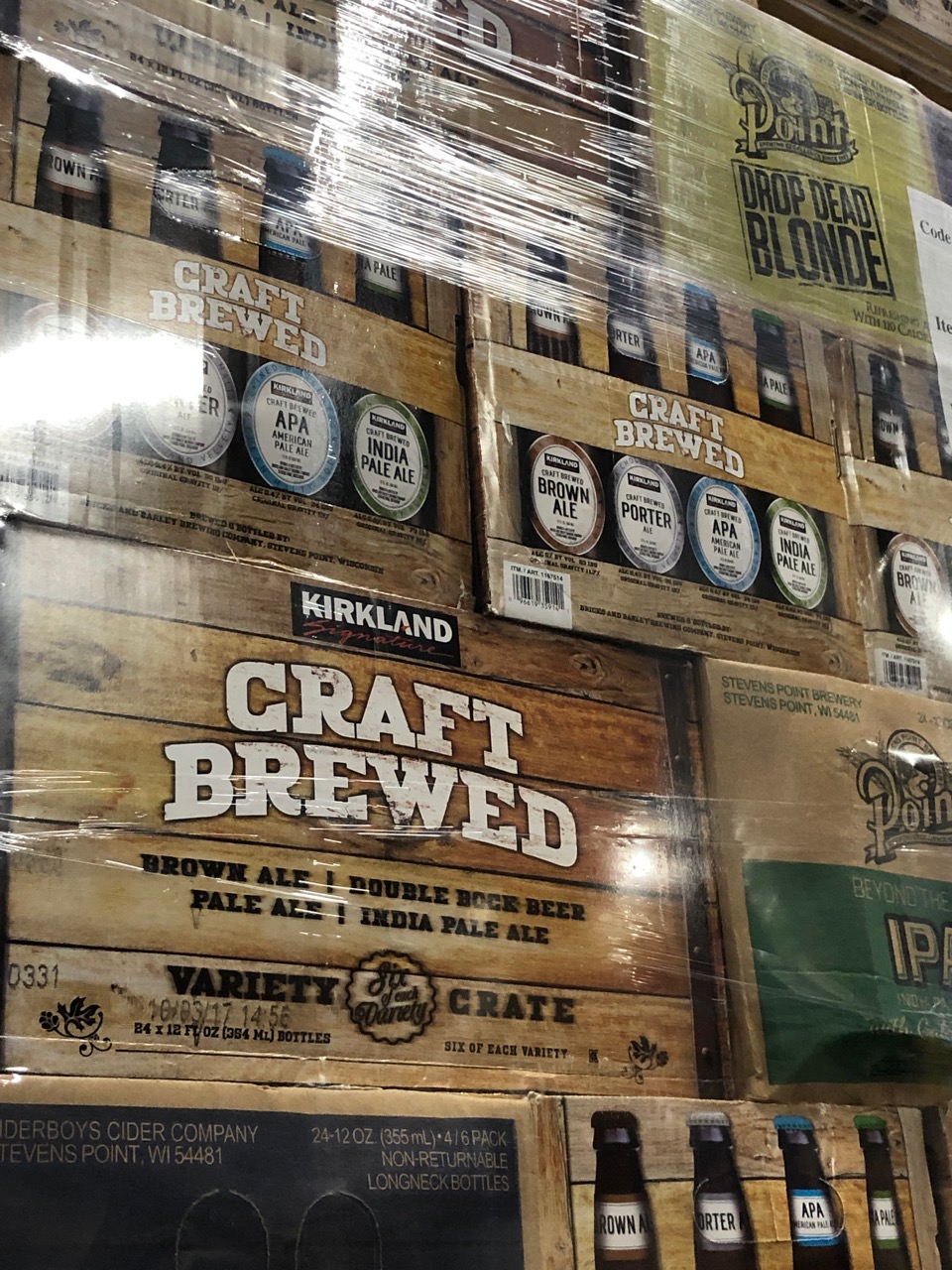 After the tour, I had my samples and was excited to try their Lager. While the recipe has changed slightly over the years, the base of it is largely unchanged from the first time they brewed it in 1857.

Following the tour and samplings, it was onto stop number two.

So I just want to say a big thank you to my wife for coming along on this trip with me. While she does like beer, she’s just not as into it as I am.

If you have someone like that on your trip up to Stevens Point, there are several stops in the Craft Collective that are perfect for them.

Sunset Point Winery is very close to the water and is a nice bright taproom on the second floor of their building. We did the wine sampling and then got a glass of wine. They have a wide variety of reds and whites, but my favorites were actually their fruit and dessert wines. 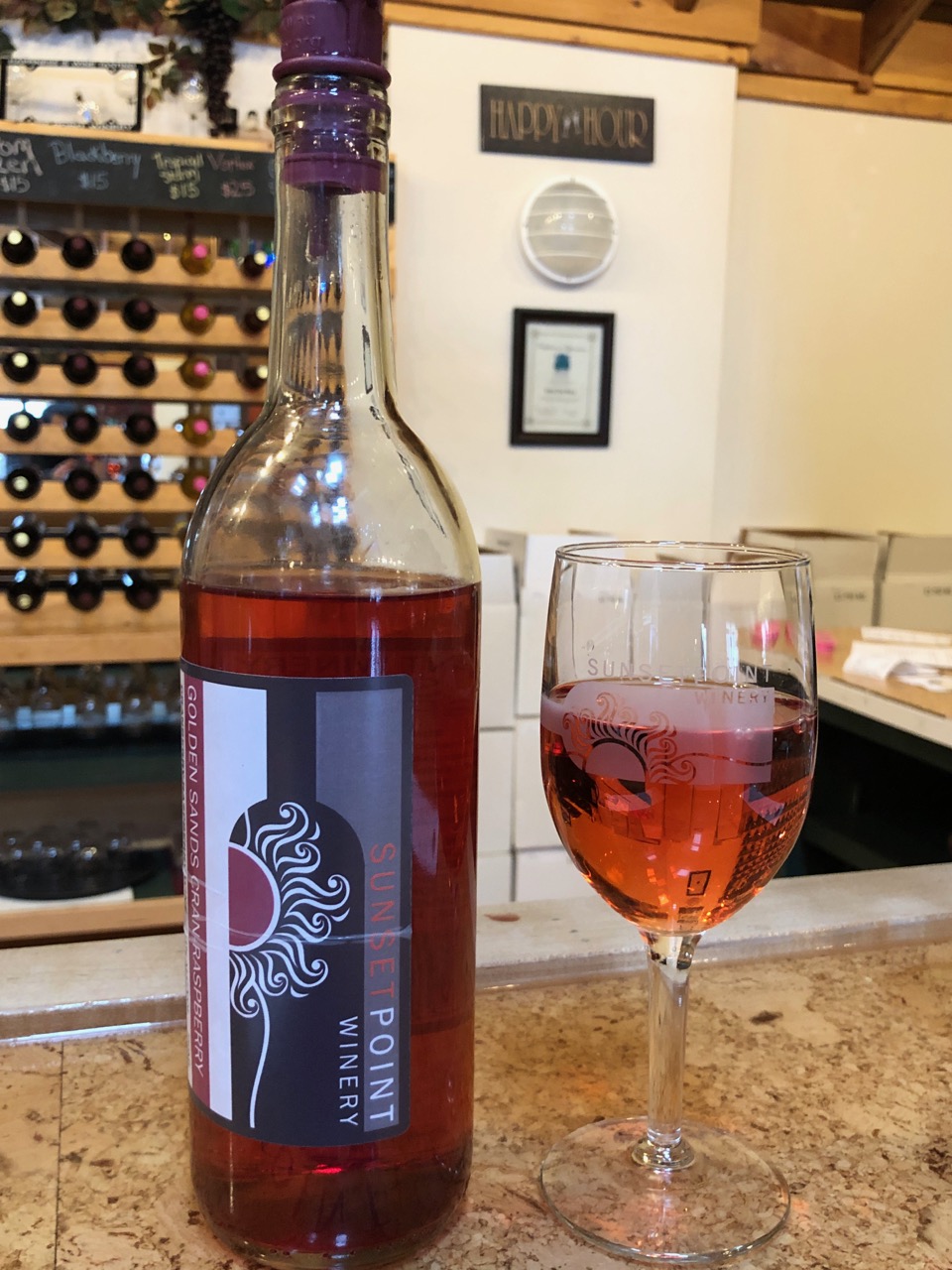 As a big fan of Cranbic from New Glarus, the cranberry wine was easily my favorite. If you’re a Pinot Noir fan, you’ll like their slightly dry Pinto Noir―that’s the bottle we took home.

Even if you don’t like wine, go get a glass and swing in their indoor hanging camping chairs. It’s fun and worth the price of the wine alone. 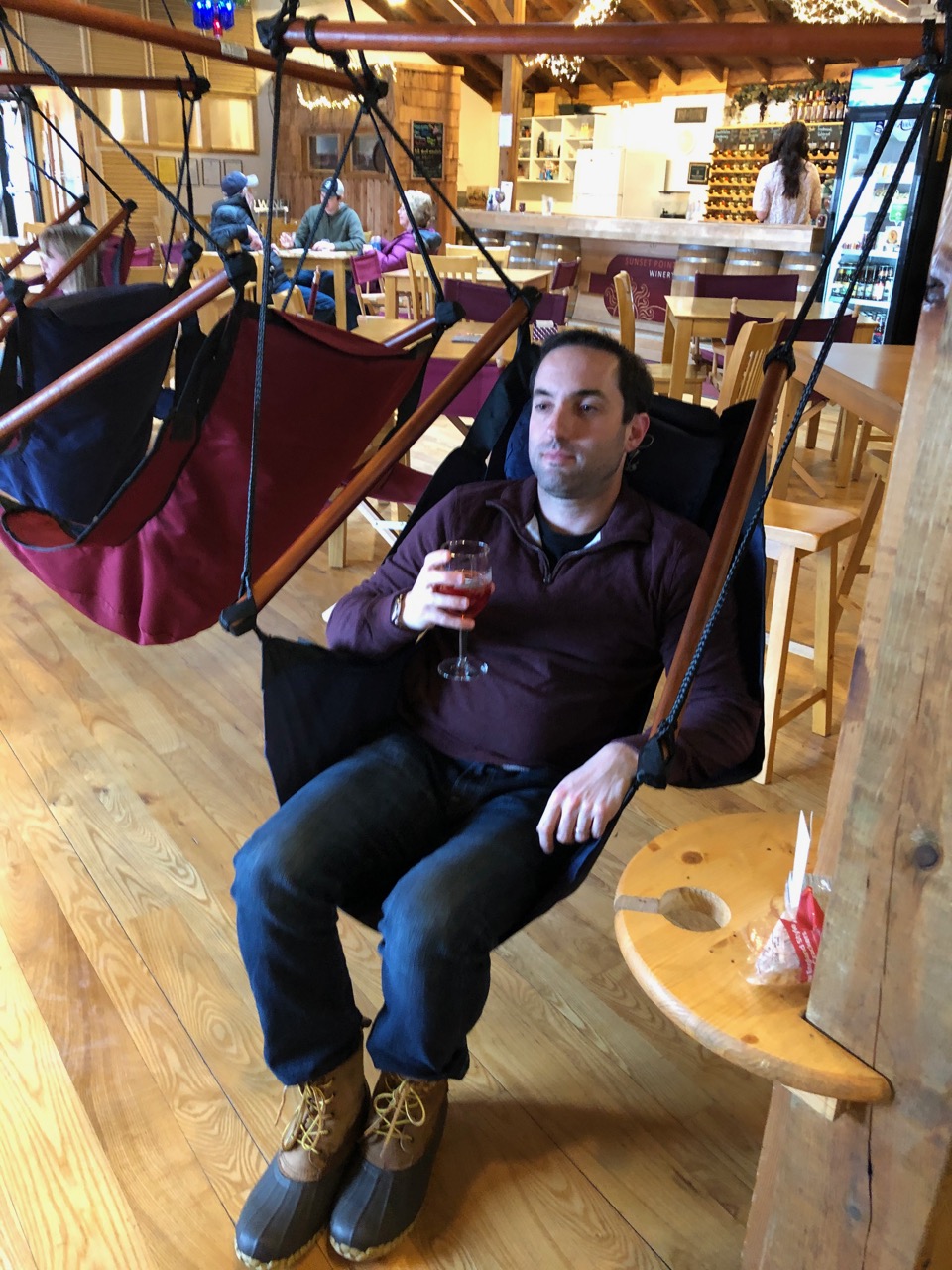 Maybe the best part about staying in Plover is that O’so Brewing is literally in your parking lot. About a three-minute walk from our hotel, the brewery that is known for their sours impressed me with the variety of styles they had to offer. 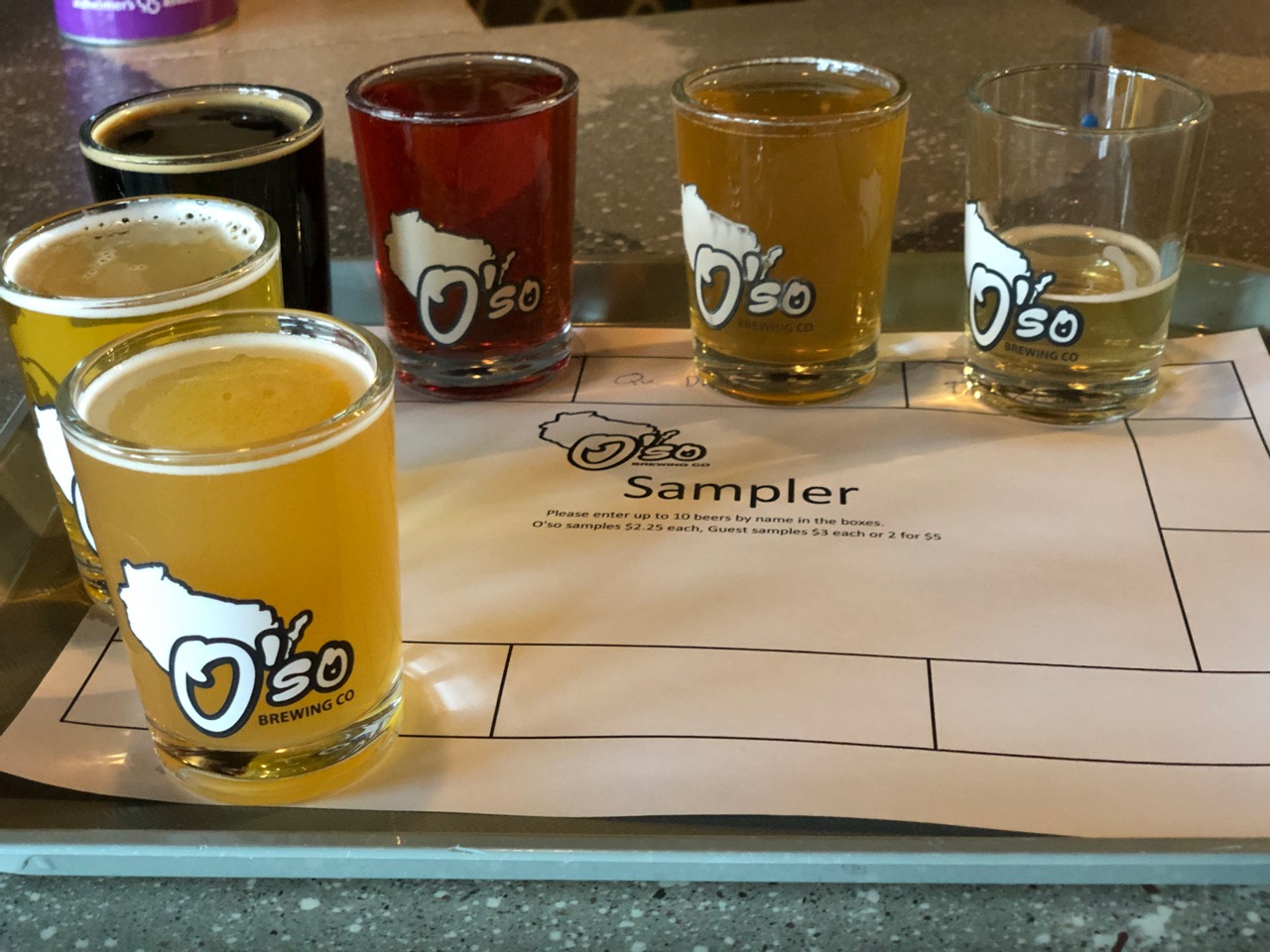 I first had, and heard of, O’so at the 2018 Great Taste of the Midwest festival. The brewery has a taproom right in Plover and while they feature sour and wild beers, there was a huge list of IPAs and Stouts that were just as good.

While the sample tray offers you up to 10 four-ounce samples, I could only do seven knowing that I had one more stop on the Collective. The sours were excellent; however, my favorite thing at O’so was the barrel-aged Stout. Just as thick as Perennial’s Abraxas, instead of cinnamon it featured milk chocolate that was absolutely delicious. 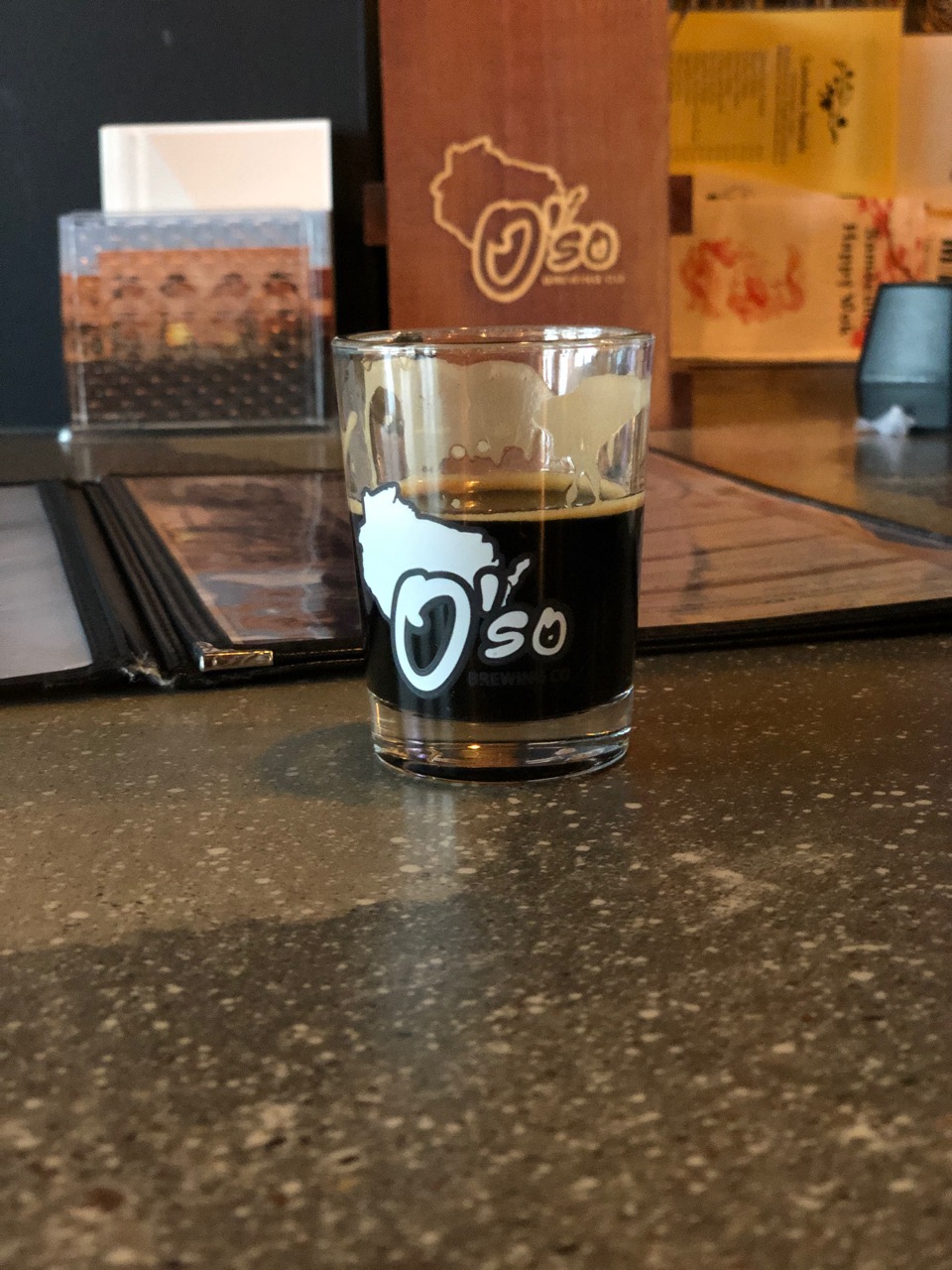 Forget the idea that O’so is just a sour brewery, they have plenty there for everyone and people definitely take advantage of their bring-your-own-food policy. I could definitely see myself settling in for the night and staying for hours.

Our last stop on the Craft Collective took us not to a brewery, but a distillery. It was the perfect way to end our tour of Stevens Point’s drinking establishments. 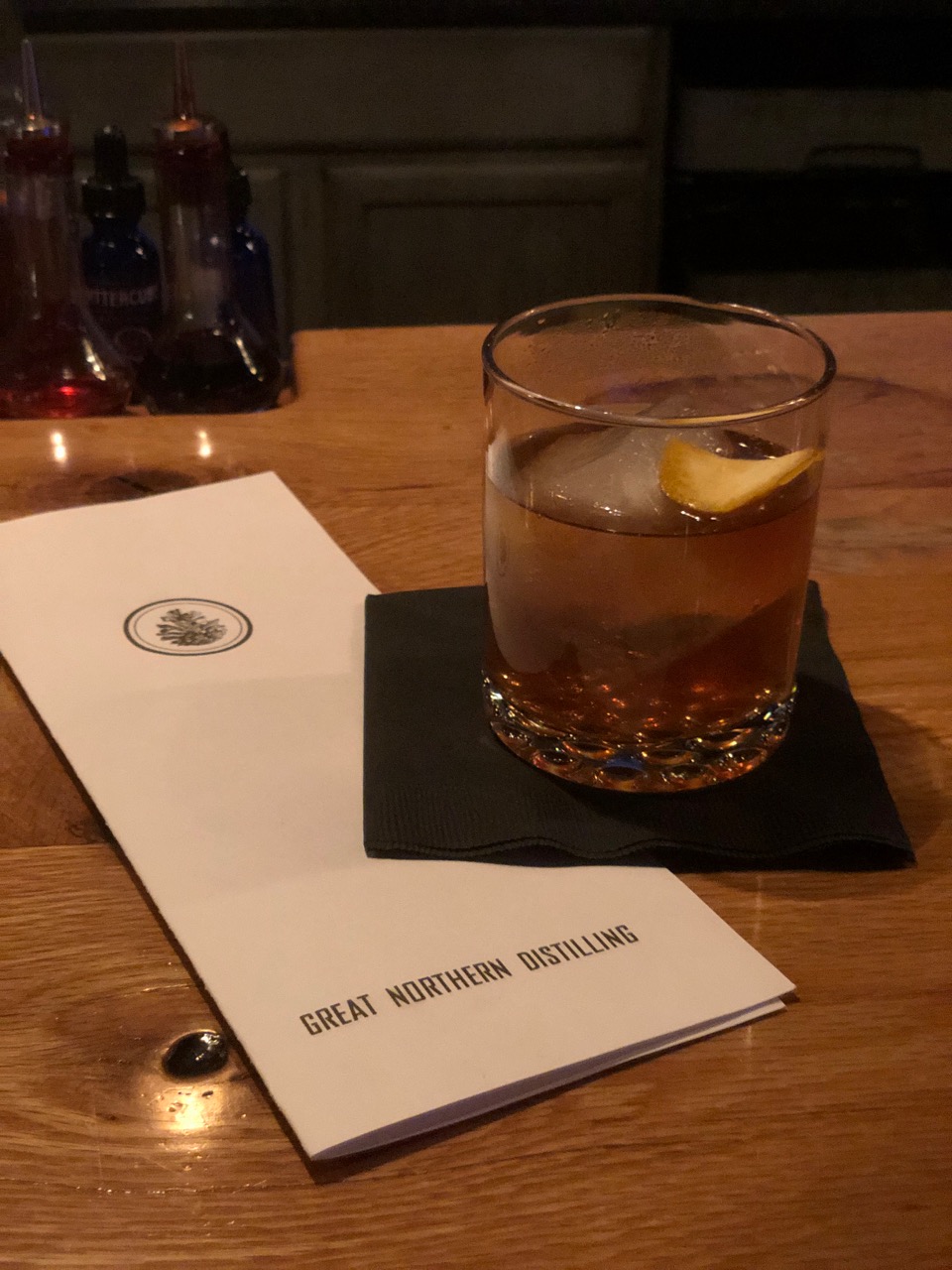 Walking inside, Great Northern is relatively small but cozy. It’s dimly lit in the evening but with big windows, this place definitely gets a lot of sunlight during the day.

We sat down at the bar and watched as two mixologists made all different cocktails with incredible skill. I ordered an Old Fashioned while my wife let the mixologist choose her drink, which ended up being a Mai Tai that gets set on fire.

Both drinks were great and after a long, nearly 36 hours of drinking beer, was really a nice change of pace.

It’s very possible to do the entire Craft Collective on a Friday and Saturday. We ended up leaving early Sunday because Chicago got hit with a blizzard that made the drive back…interesting.

While Central Waters might dominate the conversation when you come up to Stevens Point, doing the rest of the Craft Collective highlights how diverse the landscape is for drinking in general.

In the spring and summer, there are plenty of outdoor activities that you can splice in-between drinking. The food scene in Stevens Point is very typical of what you’d expect from Wisconsin. Lots of fish frys, Supper Clubs and bars that serve good food.

If you need an easy weekend getaway to try a new craft beer scene, absolutely put Stevens Point on your list. You’ll eat and drink well. 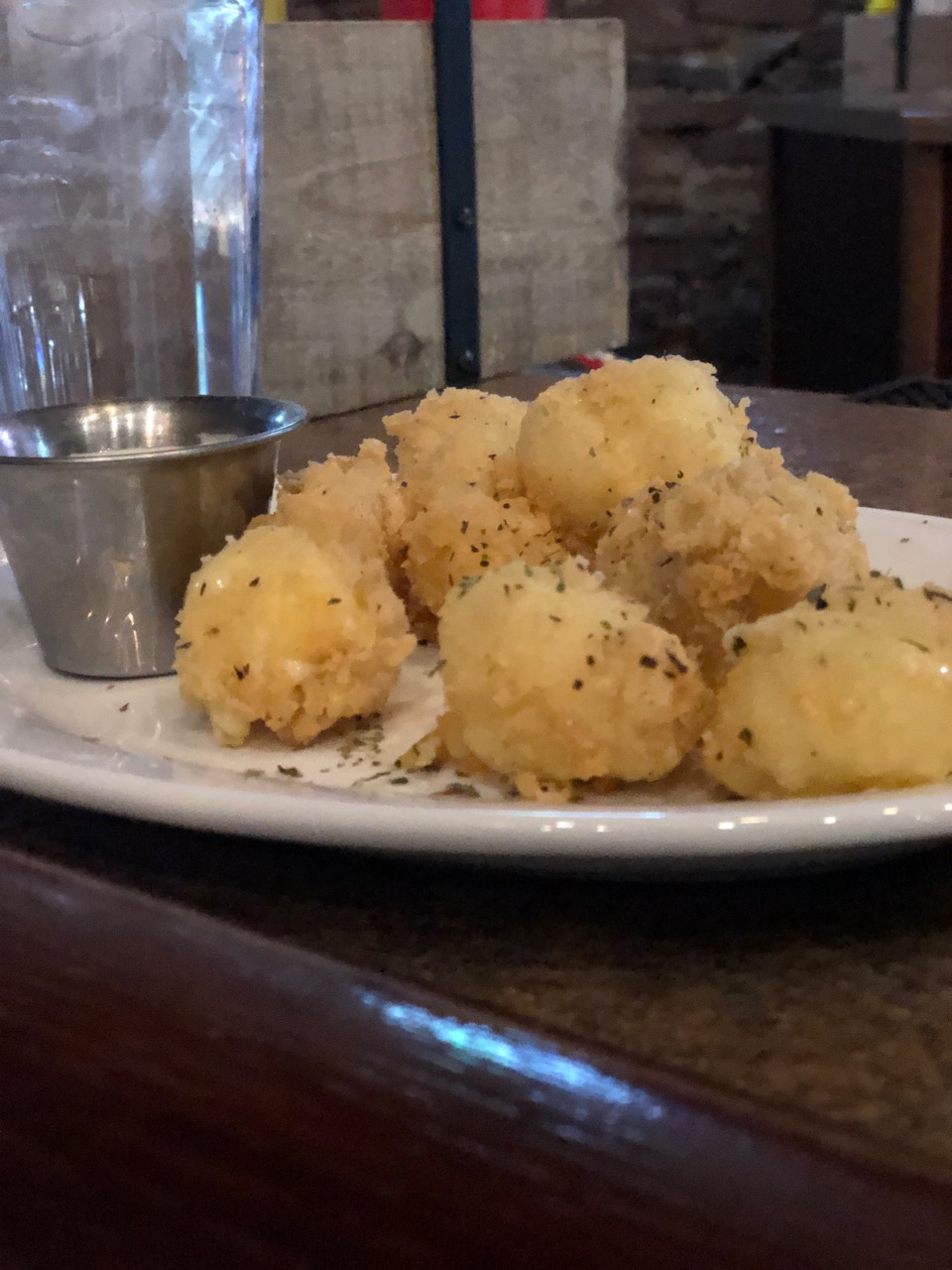