Beer ShowcasesCooking with Beer
No Comments

The best beer to pair with a Labor Day BBQ is light and smoky. Beers like Schlenkerla’s Helles, or the historic Polish beer known as Grodziskie (“Grätzer” in Germany), can’t be beaten. They have the perfect combination of being refreshing and low-alcohol, with a smoky character to complement whatever’s cooking on the grill.

It’s true that these styles aren’t as ubiquitous as others, but that’s changing. While smoked Helles in the Schlenkerla tradition seems to be most popular with American brewers, some are also making Grodziskie. Here are a few examples.

Officially Aecht Schlenkerla Helles Lagerbier, this Helles is brewed by the famous Brauerei Heller-Trum in Bamberg, Germany. The brewery is most famous for its darker Rauchbier (smoke beer), made with their own smoked malt. Despite the slightly smoky flavor, their Helles is not made with any smoked grain at all. Rather, the beer picks up some of the smoky essence from the yeast, which is harvested from a prior batch of Rauchbier. Additionally, the grain for the Helles is run through the same mill. The beer is brewed in the same system as their Rauchbier, which may contribute a little more smokiness. With just a touch of smoke, this may be a good gateway beer for people who are interested in exploring smoked beer.

Usually available on draft or in bottles, B. United International imports Schlekerla Helles to their Connecticut facility via refrigerated tanks, and cans it for distribution as well. If you’re lucky enough to see this on the shelf at your local retailer, grab as much of it as you can. 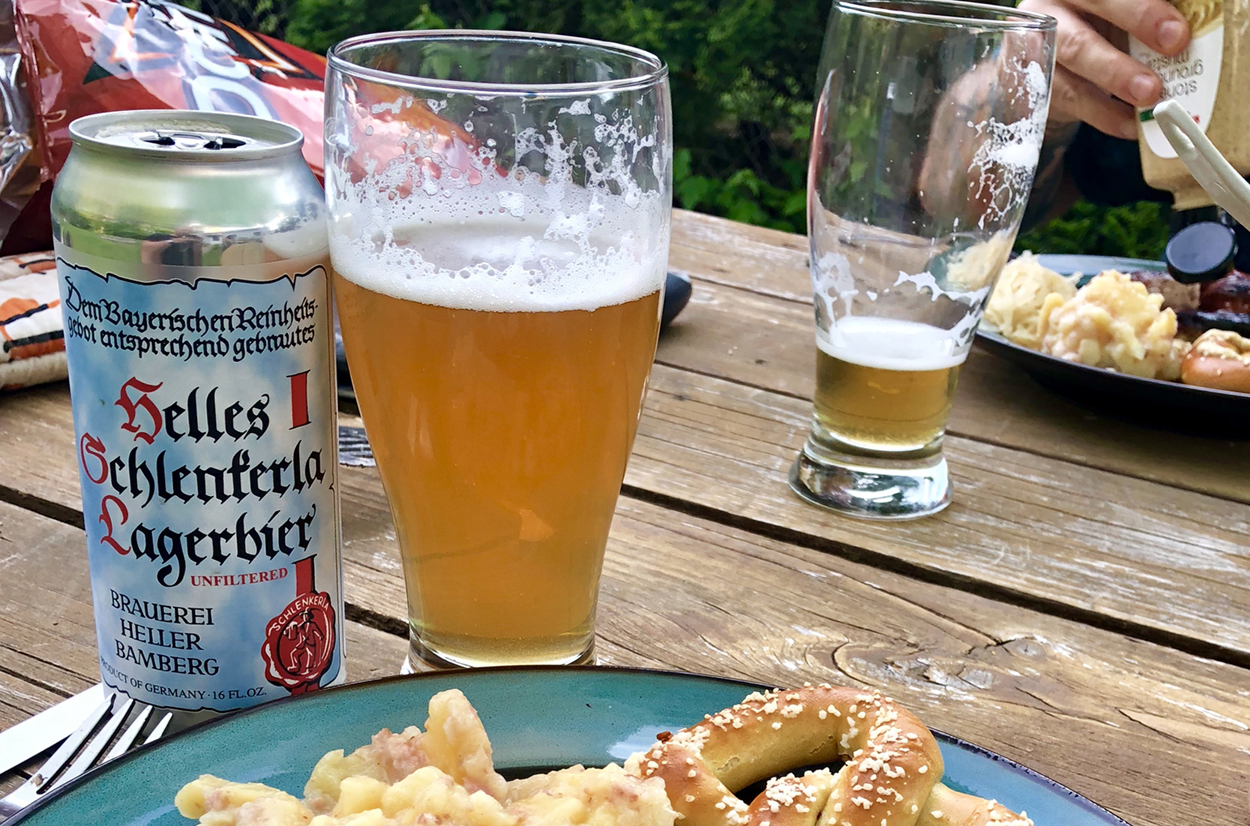 First brewed in 2014, Austin, Texas’s Live Oak Brewing Company’s Grodziskie has evolved, especially since a 2018 trip to Grodzisk Wielkopolski, Poland. There, owner Chip McElroy and head brewer Dusan Kwiatkowski brewed a collaboration beer with Browar Grodzisk. This historic style of beer waned during the Communist era until it finally disappeared in the 1990s. Largely due to a group of passionate homebrewers, as well as Browar Grodzisk, the style is making a comeback.

Traditionally, Grodziskie is made with neutral top fermenting yeast, and a grain bill that is solely comprised of oak-smoked wheat malt. It’s not far (in style or geographic origin) from a Belgian Witbier or a Berliner Weisse. The smoked oak gives a less intense aroma and flavor compared to the smoked beechwood used in Schlenkerla’s Rauchbier. That said, as Grodziskie actually uses smoked malt, it’s smokier than Schlenkera’s Helles. Given the sole use of wheat, the beer is very light in color, and Live Oak has been using Czech hop varieties for their version.

According to a recent article in Craft Beer & Brewing Magazine by Stan Hieronymus, “records indicate that during the twentieth century, brewers fermented Grodziskie with two yeast strains, one more flocculent than the other.” Shawn Scott, a homebrewer and collaborator with Krebs Brewing Company “acquired the one of the two that had been preserved, and it is now available to any interested American brewer.” Live Oak uses that strain and breaks tradition by also using its house German Lager yeast. According to Live Oak brewer Ryan Monahan “we found fermenting them apart then blending them gave us the Polish Ale character that you need while the lager yeast helps smooth out the overall attenuation and taste.”

The product of the collaboration with Browar Grodzisk was an Imperial Grodziskie, which is a bit darker and heavier than the standard version. It has more of a sweet malt presence that works harmoniously with the smoky flavor. The opportunity to collaborate with brewers in the style’s homeland allowed Live Oak to get a few tips, a key one being a source for the traditional oak-smoked malt, now part of their recipe. Future tweaks are coming as they hope to start using Polish hops in 2020.

Live Oak recently released another Grodziskie collaboration with North Carolina’s Fonta Flora. Things got a bit more experimental with that version, using hickory-smoked wheat for some North Carolina barbeque flavor, a little barley, and they fermented it solely with a Lager yeast. Finally, sea salt was added prior to packaging.

Few breweries make this style. Fewer make it year-round in the U.S. (in fact, I couldn’t find any others that do). Austin is lucky for a number of reasons, and this is definitely one of them. 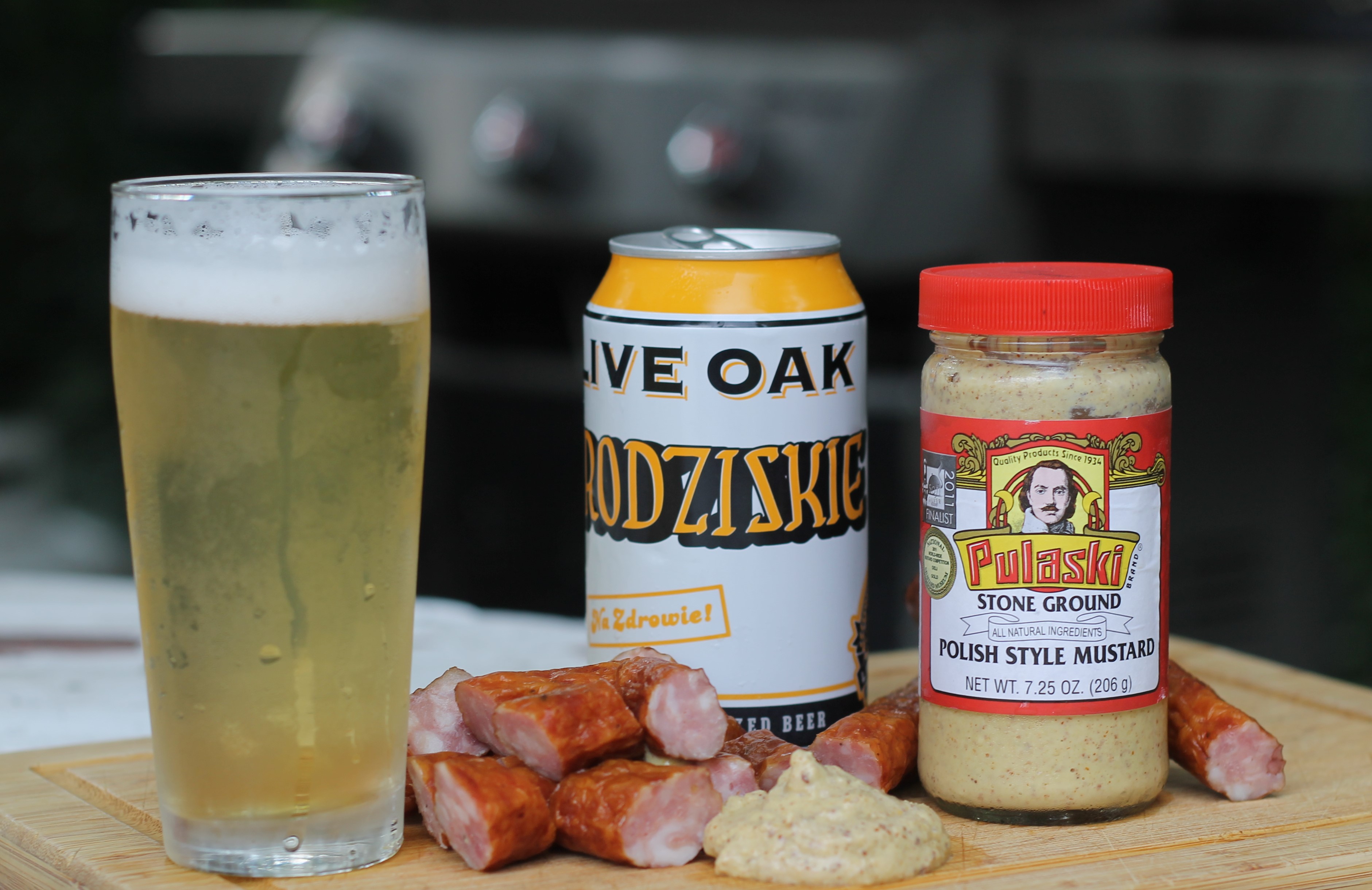 Short Fuse is released by Brooklyn, New York’s Threes Brewing twice a year, and that simply is not enough. Of course the brewery makes excellent hoppy ales and farmhouse brews, but this foudre-fermented smoked Helles is very enjoyable, and something I would easily buy year-round.

According to Threes head brewer Matt Levy “the foudre offers our lagers a toasted marshmallow note and enhances the body of the beer.” He considers the foudre an ingredient for this beer, in addition to German beechwood smoked malt, German Pils, Tettnanger hops and their house German Lager yeast. This beer has more of a smoke presence than the Schlenkerla, but is softer on the palate than the Live Oak. 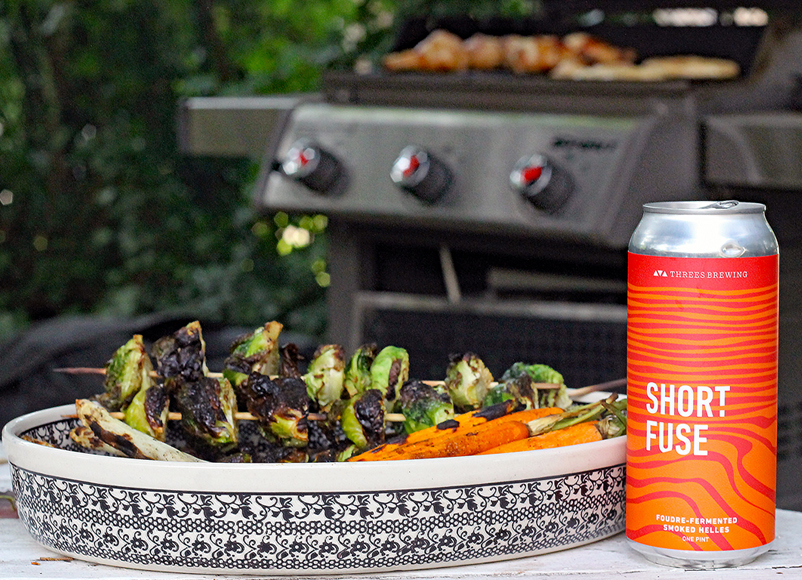 If you’re into these beers, but also enjoy a little tartness, keep a lookout for Lichtenhainer, another historic style that disappeared. Lichtenhainers are starting to pop up at a few breweries, including Live Oak (this would actually be an excellent beer for Live Oak and Fonta Flora to make on the next collaboration).

I haven’t had the following, yet, but they come highly recommended by others. Check them out if you can, and let us know what you think: