It has been quite some time since my last article, but I figure I would come back and write about one of my absolute favorite breweries in Pittsburgh, Dancing Gnome. DG has been brewing, hazy deliciousness IPA/DIPA/TIPA, fruity goodness sour ales and delicious pale ales. But the one other beer style that has been talked about and that has craft beer patrons lining up early are their stouts, such as Black Clouds!

The Black Clouds stout series has been lighting a fire in the Pittsburgh craft beer industry. They have multiple variations such as: Breakfast, Coffee Cake and Mexican Chocolate. Today I am going to be briefly talking about their Black Clouds variation, Double Vanilla.

Just recently Dancing Gnome celebrated their third year anniversary and Black Clouds Double Vanilla was one of the highlights of their anniversary release. From the brewers themselves “…conditioned on an irresponsible amount of vanilla…” which you instantly get once you crack that can and pour it. The body is nice and thick and the sweet vanilla aroma and taste pleases your taste buds. On top of the big notes of vanilla, you get nice flavors of dark roasted malt, chocolate and a hint of coffee. Clocking in at 11% this stout is silky smooth. Most noteworthy about this stout is that all the flavors work well together. Neither of them are overpowering one another.

Dancing Gnome knocks it out of the park again with this beer, their stout game has been improving and it shows! We hear that the cooler weather starts to bring about the darker beers, but we all know that all styles of beer are drunk 365 days of the year. Stout season is all year round. Cheers! 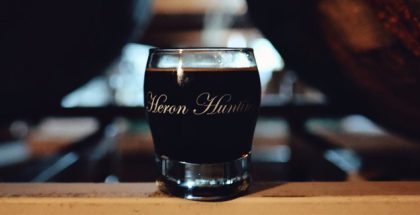