While on opposite sides of the state, two Missouri companies with very different missions have teamed up to support local veterans in an innovative beer collaboration.  4 Hands Brewing Company of St. Louis, and Veteran’s Community Project of Kansas City, have launched State Wide Hazy Pale Ale to fundraise for veterans in their home state. One dollar for every case sold of State Wide Pale Ale will be donated to the Veteran’s Community Project, as it seeks to expand its pioneering veteran services throughout the state and nationwide.

The Veteran’s Community Project (VCP) was started in November 2015 by a group of combat veterans in Kansas City who felt that their fellow veterans were slipping through the cracks of a broken system. Chris Admire, the executive director of VCP, says the project’s mission is simple: “We want to create a place where we can bring every Veteran organization together — if you rose your right hand to defend the Constitution…we’re going to figure out if there’s a way for us to help you, and then we’re going to help you.” This includes resume writing assistance, a free veteran ride bus pass program, and even free housing in their Veteran’s Village of tiny homes. The campus in Kansas City has seen great success and been met with wide praise. Now, they plan to expand to more areas of the country, starting with St. Louis.

Thus, the partnership between 4 Hands and the Veteran’s Community Project was a match made in heaven: VCP was planning an expansion across the state at the same time as the State Wide Hazy Pale Ale release. Jeremy Danner, Kansas City on-premise specialist and brand ambassador for 4 Hands Brewing, said that they reached out to the Veteran’s Community Project because “what they’re doing is amazing, and we really dug the idea that they were taking their mission statewide at the same time we were looking to create a statewide counterpart to City Wide [beer].” 4 Hands has been sold across the state for many years, but has recently seen increasing sales numbers in the Kansas City market. “It seemed perfect,” he said.

The beer itself is not hard to like. State Wide Hazy Pale Ale is bright and drinkable with the perfect amount of hazy softness. The Simcoe and Amarillo hops lend flavors of citrus and pine with just a touch of sweetness. At 5.5% ABV, it’s light enough to have a few of without sacrificing flavor.

Through this partnership, the beer’s sales will not only fund the Veteran’s Community Project in Kansas City, but will assist in its upcoming expansion to St. Louis. The ultimate goal of the partnership is to raise $50,000 to support the St. Louis expansion and building of a new Veteran’s Village. The beer is available across the brewery’s distribution footprint, spanning both Kansas City and St. Louis.

Is there anything better than drinking a good beer that does good for the community?  Whether it’s paired with toasted ravioli in St. Louis, or burnt ends in Kansas City, State Wide Hazy Pale is a great beer that serves an even greater cause. 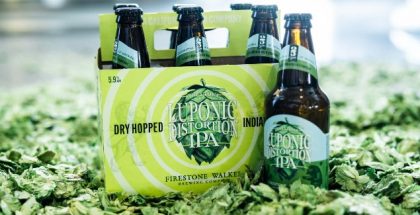