Wet and cold weather is upon us in the Pacific Northwest and there’s no better place to seek respite this winter than Threshold Brewing & Blending, an up-and-coming brewery located in Portland’s southeast Montavilla neighborhood.

Started in 2019 by brewery owners Jarek Szymanski, a Polish immigrant, and his wife Sara, Threshold brews a range of modern styles as well as traditional Polish beers with a distinct Pacific Northwest twist. Previously an engineer, Jarek combined his passion for science with beer and began homebrewing in 2007. His interest in home brewing ties back to his Polish roots, where canning and food preservation is still a time-honored practice in most households.

One Polish tradition Threshold has brought to the Pacific Northwest is hot mulled beer, or Grzaniec (g-SHAW-nee-ets), which Jarek creates by mulling their base Grisette with cardamom, orange peel and honey.

“It’s super warming and served in traditional steins around the holidays,” Sara explained.

But Threshold’s seasonal showstopper this winter will be the re-release of their Neptune Baltic Porter, which previously won bronze at the Oregon Beer Awards in the European Dark Lagers category. “This was a recipe Jarek had been working on for a while,” Sara said. “It was thrilling to see it turn out so beautifully.”

Baltic Porters were originally brewed in the cooler climes of the Baltic Sea in northern Poland. This underdone style is a unique find in Portland. Instead of using ale yeast, as is typical of standard Porters, Baltic Porters use Lager yeast fermented at a lower temperature, which yields a more malt-nuanced and bigger-bodied beer.

Threshold’s Neptune Baltic Porter is named after the famous Neptune Fountain in the Baltic city of Gdansk, Poland where Jarek attended university.

“When we first opened as a new Portland brewery in 2019, we essentially had two goals: pay the bills and find our footing in a town with no shortage of great craft beer. But now Jarek really asks, ‘What do I want to celebrate as a brewer? How can I bring my roots and background, my identity, into what we’re doing now?” Sara said.

Along with the re-release of the Neptune Baltic Porter on draft and in cans, Threshold Brewing will also be releasing a 12-month whiskey barrel-aged version of the beer to their bottle club members, the Cellar Circle.

The Neptune Baltic Porter pours a rich, dark brown with a strong chocolate aroma. The beer is definitively chocolate-forward but smooth and well-balanced, with roasted malt notes, as is characteristic of the style.

“If you like chocolate between 50 and 60% bitterness, you’ll likely enjoy this beer,” Jarek said. After the initial sip, the aftertaste is delicately astringent with notes of dark fruit. The stronger whiskey barrel-aged version has less of a whiskey-predominant flavor than other barrel-aged beers because of the initial beer’s low ABV at 6%. This beer is the perfect drink to cap off a night with friends and family this holiday season.

For now, Threshold Brewing & Blending predominantly self-distributes throughout the greater Portland area and western Oregon. You can find their beers in select bottle shops in the Pacific Northwest, as well as at New Seasons, Green Zebra and Market of Choice this fall. 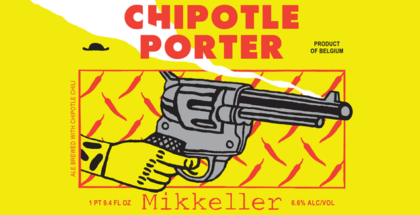