Goose Island was the first true craft beer I ever tried. It was a well-respected and widely available brand throughout the Chicago area, so it only made sense. 312 (named after the area code in which it was originally brewed) quickly became one of the first beers I would recommend to folks who aren’t traditionally fans of beer, or are looking to expand beyond the typical Bud or Miller products. Similar to most wheat beers, 312 is easy to drink and lacks the hoppy or malty impact of heavier beers. It’s not a great beer – it’s a great beginner’s beer.

As of several months ago, 312 isn’t even brewed in the area code that bears its name.  Anheuser Busch InBev (AB) purchased Goose Island in 2011, and since has moved manufacturing and bottling of the main Goose Island brands to New York. 312 is now made in area code 315. Not only that, there are murmurs of AB changing the recipe to make the mass distribution of 312, Honkers and other established Goose Island brands more affordable for the bottom line. After all, beyond simply not having the means to mass distribute, Goose Island wasn’t available nationwide for a reason. 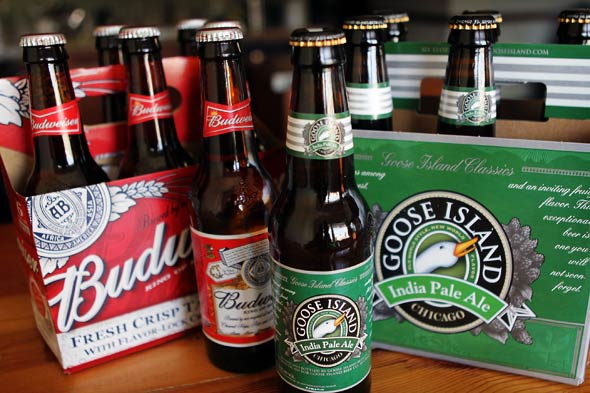 Look, I’m not naïve. I get that change is inevitable, particularly in an industry like beer where breweries are forced to react to market trends. The current market trend is the resurgence of craft beer, and since AB has failed miserably at in-house attempts to replicate the phenomenon (ahem, Shock Top), why not just buy an established brand. Enter Goose Island. What is unfortunate to me about this whole development is the loss of another Chicago institution.

I’m relatively young, but I’ve seen a startling amount of Chicago’s landmark businesses and buildings disappear in the name of progress. Old Comiskey Park, Chicago Stadium, Marshall Field’s, to name a few – each was shuttered and sometimes demolished in favor of something new and more advanced. That is what Goose Island is to the Chicago craft beer scene. It’s comparable to what New Belgium is to Colorado – the first brewery people think of when the topic comes up in a conversation.

I know a lot of people will say I’m making much ado about nothing. The beer is still available, and the signature bottles will still be made in-house at the flagship brewery on the north side of Chicago. But that’s not the point. Tinkering with the formula to make a beer more palatable for mass consumption or altering any aspects of the brewery’s main brands will take away from the brewery as a whole. It’s like if your favorite restaurant decides to allow franchising throughout the country and the new incarnations are downright terrible. No matter the continued quality of the original location, the first thing to come to mind will be the compromised quality of the brand. After all, AB has done this before. Think Rolling Rock. Think Becks. Neither beer tastes remotely similar to what the original recipe intended.

So join me in a toast. Raise a glass of 312 (ahem, 315) and try to notice a hint of taste difference. Toast to AB taking the easy way out and admitting that craft brewers are the true innovators. Toast to what once was a great brand in Goose Island and the hopeful continuation of that success. Toast to the hope that AB finally realizes a good thing when it has it and decides not to make any changes. Maybe that’s naïve.