It’s like riding a chocolate wave of star-dust through floral hop galaxies. Taking on the Uinta Brewing Dubhe Imperial Black IPA is a journey through the stars that is dry yet refreshing, malty yet hoppy, light yet bold. Shit is crazy, brah. The beer pours a rich, malty black with a rocky tan head. Is this a fucking stout? Is this a porter? What the shit is going on in my glass? I was expecting a big, hop-heavy aroma with the five hop varietals in this brew but it comes off as a malty, sweet beast. There is a floral ester coming in before the first sip and most of that must be the hemp seeds? That first quaff is creamy and thick, with chocolate malts and a slight bitter punch coming mid-palate to fight off any cloying, bitch-ass malts trying to hang out on the tongue. Malt goodnesses AND hops galore. Wicked.

I am a super, big fan of space. Like, seriously, I really do love space. The dudes at Uinta Brewing were pretty much speaking to me when they developed the artwork and name for Dubhe, their BIPA. Or is it a Cascadian Dark Ale . . . Or an American Dark Ale . . . . Ugh, what is this? And why does it taste so good? Aside from the radical labels that these cats continue to put out, they are from Utah AND they brewed this beer with hemp seeds. HEMP SEEDS. The beer is called Dubhe (Doo-bee). Coincidence? I think not!  After repeated drinks it becomes apparent, this beer is  just a great beer to drink in the months between seasons. When you want a big, malt forward brew but not something that weighs on you, you can grab this. I can also see this being a great patio beer in the fall if you want something hoppy but are looking forward to the taste and calming chill of fall. Be careful though, this beer masks the 9.2% ABV very, very well. 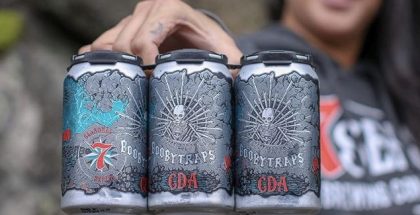