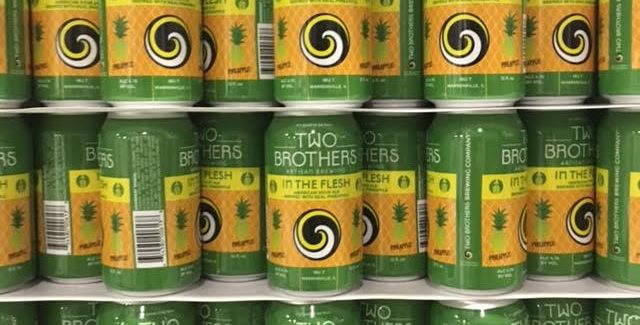 The inaugural beer of the series, which will all be called In the Flesh, features a mild sour that is a great way to introduce the novice beer drinker to sours. The flavor isn’t overly sour at all – we’re not talking War Head-level sour here. There is a slight tartness on the backend of the beer that will give the drinker a slight sour bite, but this isn’t like 3 Floyd’s Icelandic Pants of the Dead.

Pineapple is the featured flavor of the beer and it’s not overpowering, You’re going to get a more well-balanced citrus flavor with an underlying tone of pineapple in the beer. Classified as an American Sour style, the beer is fermented with pineapple puree that provides the subtle sweetness and tartness you’ll get when you drink the beer.

Ideally I’d like a bit more pineapple flavor in the beer. If pineapple is in the title I would expect it to be more prevalent in the beer. However, if the title was just In the Flesh many would say the flavor is spot on. It’s still a well-balanced beer but again I would have added more pineapple puree into the batch to really highlight the tropical notes of the fruit.

Like most Two Brothers beers, In the Flesh pours a very clear golden straw color. On the smell you’ll get tropical notes with that hint of acidity in the background. At 4.1% ABV it’s light enough to have a few of them on a warm summer day on the beach or at a BBQ and not mess yourself up.

I’ll definitely look forward to the future In the Flesh beers. Two Brothers is a GABF medal-winning brewery that is constantly producing solid beers and In the Flesh Pineapple is one to give a try this summer.