As most beer aficionados around this area know, GLBC’s version of Christmas ale has a nice mellow collection of spices wrapped neatly inside one glorious pint. The expected tastes of honey, cinnamon and ginger are ever present along with the soothing orange hue post-pour. There is a reason why this is one of the best-selling seasonal beers that Great Lakes offers.

To make this new version, Great Lakes Brewing Company has aged their Christmas ale for six months in bourbon barrels, and the result is nothing short of phenomenal.

This bourbon barrel-aged ale pours a slightly darker orange, a more vivid hue than the regular version. There is a bit less head as well, at least after my own pour. The beer settles nicely and remains opaque, which to me is a beautiful thing. Many of my favorite beers present themselves in this way. Additionally, this ale is as smooth as silk. It is a bit sweeter in taste as well, which makes sense because of the bourbon barrel aging. I noticed vanilla right away after my first few sips. As I finished this glorious brew, I pictured fellow fans of the winter season lying back in front of the fire, taking in the warmth and the smoke and enjoying this holiday beer which has hints of smoke as well. Believe me, friends, this is going to make your holiday season much more enjoyable, even if you do not embrace it as others do.

This is not the only time Great Lakes Brewing Company has aged a beer of theirs in bourbon barrels; they have been doing this to their hefty Blackout Stout with exceptional results.

To sum up, both Christmas ales are spectacular this year. Both have a similar ABV of approximately 7.5%. In order to purchase the bourbon barrel-aged version of this ever-popular Christmas tippler, you will have to travel to Cleveland and visit the brewpub on November 26 for their release. Both the bar and gift shop will open at 10 a.m. for all those eager buyers. Each bottle will cost $17.95. I think it’s a reasonable price to pay for a well-crafted beverage to sip at all the parties you’ll have over the next few months! Each bottle will even be tagged, numbered and signed to guarantee its authenticity. Not a bad proposition, in my honest opinion.

So stop on by Cleveland over the Thanksgiving holiday, brave the possible lake-effect snows and stock up for the wintry months! 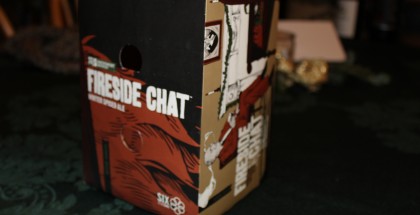