When I heard that one of my favorite Kentucky breweries, Braxton Brewing Co., was creating a “beer baby” to commemorate the 10-year anniversary of one of the most awesome local beer events of the year—Cincy Winter Beerfest—I was immediately excited. When I heard it was a stout beer, I was even more intrigued.

But when I saw the press photos, I was confused—and felt a little let down.

A mocha stout (yum!) that’s… a blonde? Surely it wouldn’t taste like a stout or have the silky-smooth mouthfeel of a stout. As a die-hard milkshake-thick stout fan, I was skeptical, but was willing to give it a shot. And I’m so glad I did!

Although the beer pours a golden color and looks like it would taste more like a light, summer-drinkin’ beer, its flavor is straight up rich stout, complete with heavy mouthfeel. Brewed with a British base malt at high initial mash temperature, it boasts a full, malt-forward flavor profile characteristic of your traditional stout. Normally, the dark color of a stout is derived from a large quantity of dark roasted barley, which is also what imparts the chocolate-coffee flavor. However, in this case, Braxton played a little trick on us (a “bluff”) and extracted those chocolate and coffee notes from… actual cocoa nibs and Starter Coffee. They did this step after fermentation was complete, bypassing the traditional dark stout color from the barley.

Here’s what Braxton has to say about the strange brew, from their website:

The appearance of our food and drink have such an impact on our overall impression of what we are about to consume. It sets expectations. So when we had a chance to make a beer that could set up the expectation of a light-bodied blonde ale, and completely shatter that by delivering a full-bodied stout loaded with coffee and chocolate notes, we couldn’t pass it up.”

This beer was just tapped at Braxton’s taproom on Thursday, January 19, so grab a pint while it lasts and let it break your mind a little bit. It will also be available at Cincy Winter Beerfest (February 17-18 at Duke Energy Convention Center). 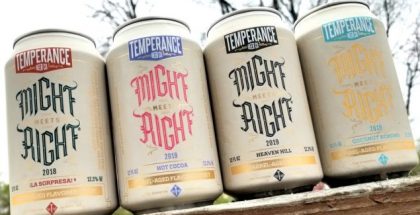