Barrel-aged beers are the dope suits of the brewing world—looking good and ready for a party. Across the nation, brewery’s special releases and anniversary parties frequently involve something from a barrel, and bottle share parties are routinely marked by ice-filled buckets of barrel-aged whales. The Festival of Barrel Aged Beer (FoBAB) involves a sea of brewing alchemy; it’s the A-list party of brews. One will find special beer after special beer produced by some of the nation’s best breweries and barreling programs.

Fifteen years ago, FoBAB existed as Chicago’s unique little BBA party. Now, with some 200 breweries attending and beer geeks arriving from all parts of the country, it’s clear the festival has grown to become a national beer-geek celebration. The beer varieties are as diverse as ever, from Lacto and Brett brews to Bourbon and Gin infusion.

In short, FoBAB resembles beer fans’ interest in trying new, creative, experimental barrel-aged brews. Case in point, prior to the start of the Great American Beer Festival (GABF), a host of beer writers, bloggers and podcasters met for “Bangers & Smashed,” which was ostensibly a breakfast burrito and bottle share party. You want to guess how many bottles included the term “barrel” on the label? Let’s just say it was a fun way to start GABF.

Furthermore, speaking of this year’s GABF, an enthusiastic crowd surrounded the Avery and Odell booths as they blended two barrel-aged beers together (Effin Teamwork). It wasn’t just enough to get in line to taste the beer; one had to take pics, video and cheer loudly.

Yes, barrel-aged offerings have become the rock star beers of the brewing world, and FoBAB is its longest, biggest concert.

Here are a few of the headliners

The Rare Barrel likes to have fun with barrels.

Fremont has purchased a barrel or two recently.

Surly. That’s all you need to say, really.

Pipeworks doesn’t ever miss a party.

The list goes on and on. Two hundred beers. All barreled. Fruited. Soured. Bourbon and Rum. I mean, have you seen the brewery list? We wrote about it recently.

If you can’t go this year, go next year. It’s where all the whales hang out.

Liquid Gold | The Road to FOBAB

The chill in the air this morning has us extra pumped for Fall AND the 15th Annual Festival of Wood & Barrel-Aged Beers (2017) 🍁🍻Pour yourself a barrel-aged beer and take a look at last year's mini-doc featuring Destihl Brewery, Lake Effect Brewing Company LLC, and Penrose Brewing and their quest for #FOBAB gold 🥇 General Admission tickets || September 14 at 10a CSTwww.fobab.com 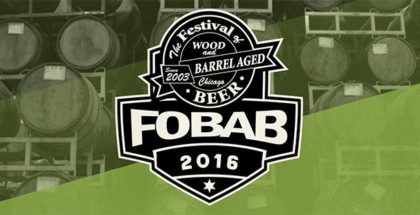