From a very early age, my mother enrolled me in piano lessons; I think part of her retirement plan was for me to be a successful musician (sorry, Mom). Practice was not my strong suit, and when I showed up for my weekly lesson doomed to repeat the same exact mistakes I’d made the week prior, I discovered there was one sure way to escape the teacher’s wrath. Well-timed use of that floor pedal on the right would conceal any errors, which would merely echo in the background and fade as soon as I released it.

Or so I thought. The day came when I encountered a teacher far shrewder (or perhaps less charitable) than any of my previous instructors. She assigned to me one of J.S. Bach’s inventions and prohibited all pedal use—she even tied my ankle to the piano bench to eliminate any temptation.

That piano pedal is known as the sustaining or the damper pedal. It has a number of equivalents in the beer world, from aggressive hops profiles to overwhelming sour notes. Behind these dampers, any number of off-flavors and faults can be cleverly concealed. (In fact, this is how the double IPA was born.)

Pilsners have no such luxury. Either the melodic notes of a pilsner’s malt profile harmonize perfectly with complementary notes of earthy hops, heard only by the most attentive listener, or they do not. Only the most precise and demanding of brewers can brew a pilsner well; without these characteristics, a pilsner will merely be empty noise. Where other brewers have failed, pFriem has carefully composed a masterpiece.

After being poured, pFriem’s Pilsner seduces you with its delicate white head, conjuring an image of meringue, before dissipating to a thin layer atop a golden-straw body with brilliant clarity. The opening bars of this composition waste no time, delivering a deceptively simple aroma of grainy malts on the nose. Pursue it further and you will detect the smallest dollop of honey along with earthy hops and the faintest echo of black peppercorns. As you taste it, it becomes ever more clear the melody of this piece belongs to the grainy, cracker-like malts. A steady repetition of tastes reveals inviting, yet very subtle, highlights of lemon zest and floral hops. Throughout the experience, you will enjoy a soft, almost fluffy mouthfeel leading to a dry and crisp finish.

pFriem’s Pilsner introduces acute listeners to the staggering breadth of the brewery’s repertoire. After an initial session, you may be tempted to explore some of pFriem’s increasingly elaborate compositions. Conversely, you can help yourself to another of pFriem’s illustrious Pilsners. Whatever your choice for an encore, if it is pFriem you are pouring into your glass, be prepared to encounter divinity as the chorus reaches its crescendo. 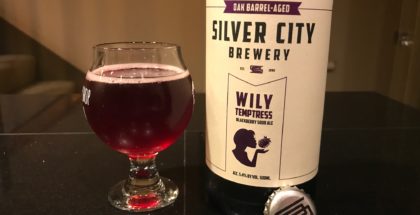