The addition of suburban-Chicago’s Oswego Brewing Company (May, 2018) further demonstrates that the craft beer industry is far from “too crowded.” Oswego Brewing has fit in nicely, thank you, and is drawing in its own new loyal crowd of craft beer fans. Operating out of spacious building — the town’s former fire station — and under the direction of the multi-award winning head brewer, Marc Wilson, Oswego Brewing deftly balances the art of offering sophisticated special releases alongside solid, versatile year-round and seasonal choices.

Just as any restaurant is a reflection of its chef, talented head brewers and assistants are integral to a brewery’s success. Wilson, the one-time chemistry teacher, began his brewing journey at the Siebel Institute of Technology before working at Rock Bottom Brewing, the GABF and World Cup winning Nevin’s/Midnight Pig and now Oswego. He has also served as a judge at the Festival of Barrel-Aged Beer and teaches classes about the business of craft brewing at the College of DuPage.

So, let’s just say he’s not a rookie.

Though some might wonder why he left the successful Nevin’s/Midnight Pig for the start-up Oswego Brewing for a a brewery starting at ground zero. Wilson explained, “There was the opportunity to come in on the ground level and become a part owner. That was pretty enticing.” He added, “Things are a bit different at Oswego, too…everyone that’s working here is working towards the brewery. We are a beer-focused establishment.” That differs from Nevin’s and Rock Bottom, which both functioned as restaurants, event centers, bars, and music venues, Now, as Wilson said, it’s all about the beer.

Given Wilson’s experience, he was able to hit the ground running.

“The last few years at Nevin’s, I really hit a stride and recipe development going well. I brought that here.”

While one could discuss the barrel-age creations and an abundance of special beers, one only need to drink Oswego Brewing Spur Line Kölsch and Leder-Weizen Hefeweizen to assess the quality of beer produced at Oswego.

“I’m usually not that impressed with Hefeweizens made in the States. I decided to try it. I’m actually pretty happy with it..there’s a really good expression of banana in it, which is nice.”

And the Kölsch, a style quietly enjoying a resurgence in Chicago, offers drinkers a light, clean ale with nice body and plenty of flavor; it’s not just good because it’s light and true to style; the Kölsch is an exceptionally enjoyable beer.

The brewery, which sits in a small town that is part-suburb, part small-town, is still somewhat new to the craft scene. But, as Wilson reminds, craft beer is still new to many people. “We (craft breweries) are still very young. the excitement is still out there for craft-beer discovery. It’s not like ‘I’ve tried everything so I only want to try your pastry stouts or whatever.’ Especially out here [in Oswego].”

In addition to the year round and regular-rotation beers, Wilson and the crew are apt to enjoy barreling the beers, too, from strong to sour, brett to experimental yeasts.

Creativity and imagination go hand-in hand with skill when it comes to barreling beers.

“Sometimes you make beer with the intention of barrel-aging it, other times you make beer and think, “Hey, that would be great in a barrel,” explained Wilson. He added, “When you first ferment with Brett, it can express a lot with aroma, but it takes time to get the flavor.”

And flavor often involves the inclusion of fruit to a sour/wild; which Wilson demonstrated with a Belgian Tripel, aged in Sauvignon blanc barrels with Brett and blackberries.

The complex nature of the the aged Tripel with Blackberries resulted in a tasting experience comprised of several flavor notes. But, akin to a well constructed cocktail, the flavors work seamlessly. One can care to concentrate on the complexity, or one can just drink it and enjoy it.

In short, from Brut IPA to Brett, and Kölsch to Coffee Porter, Oswego churns out a wide range of excellent beer.

And isn’t that what it’s all about?

Well, yes and no.

No brewery can rest on its beer alone, for we have seen several good breweries close in recent years. There must also be a good experience and good people.

The brewery operates out of the town’s former fire station, built during the 1950s. While it would have been easy to hide the brew house in the expansive back room, Oswego wanted to assure its customers were privy to the brewing process.

“We wanted to make sure part of the brew house was visible; it’s a good showpiece and makes you feel is if you are right there where the beer is being made. You can see our brewers working hard, can see a brewer on the brew deck, and things like that.” Indeed, during my visit, assistant brewer Matt Hilt was behind the bar removing spent grain from the tanks. The patrons are not just getting a “show,” they are watching them really work hard — the beer is fresh and every customer can see that.

And, of course, there’s a host of parties, events, and an otherwise engagement with the community; all of which help put the Oswego in Oswego Brewing.

That is what “drink local” is all about. 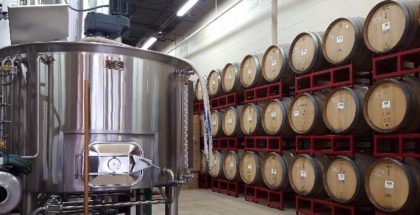