Creature Comforts Brewing Co. experienced a milestone this month that was marked with a handful of firsts for the brewery. They bottled their first barrel aged stout, which was released at their first bottle release event that turned out to be their largest event since opening. The entire event was calculated with as much attention to the details as possible. The beer, See the Stars, was more than a year in the making. The patience, initiative and discipline to make all this happen shines through the brew it became.

Creature Comforts is a brewery that does nothing in half measures. Their commitment to the quality of their products and the intimacy shared with their supporters is what puts this brewery at the top of my list. I rave about few breweries. Now, beers, there are quite a few I will go on and on about, but I can count on one hand the number of breweries I have a beer-crush on. Creature Comforts is one of them. See The Stars epitomizes this brewery’s personality and standards. This was no weekend brew. It took over a year of preparation to get See The Stars into the hands of eager, and I do mean Eager, imbibers.

See The Stars made a wondrous journey from idea to bottle. It was conceived alongside the birth of Creature Comforts. Co-Founders Adam Beauchamp and David Stein acquired several Willet Distillery bourbon barrels only months after the brewery mashed its first beer. Four of these barrels were sent up to New Hampshire where they were filled with 100% pure wood fired maple syrup by Mac’s Maple, a family owned and operated maple farm, and left to rest for 4 months. While the barrels matured in maple syrup, Creature Comforts was brewing the Russian Imperial stout that would reside within the barrels. After a 4 month vacation in New Hampshire, Mac’s Maple emptied the bourbon barrels of the maple syrup and bottled the newly bourbon infused maple syrup (bottles are available here). The barrels were then sent back to Creature Comforts, where they were filled with the Russian Imperial stout and cellared for 1 year to mature into See the Stars. 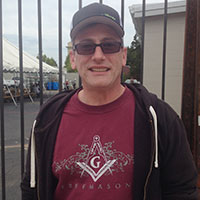 This piece of art could have been named Reach the Stars from the turnout at the bottle release. There was no doubt in anyone’s mind that this stout was going to be something special. The brewery sold 150 preordered tour tickets to excited Creature Comforts fans. The pre-order tickets completely sold out weeks before the event. Due to the overwhelming feedback after the preorders sold out, Creature Comforts set up a second See The Stars Tour that was on a first-come-first-serve basis with caveats. The second event didn’t come with the same amenities as the official event, but guests who purchased a See the Stars tour were guaranteed a bottle of the namesake stout, while supplies lasted. Those that didn’t preorder a ticket lined up at Creature Comforts’ main entrance hours before the brewery opened with hopes of getting a bottle. Tom Anastasia (pictured above) was the very first person in line at 5:30am. The next person in line arrived at 6:30am, then more at 7:00am and so on. By the time Creature Comforts granted general admission access, at 1:00pm, around 100 guests had lined up down the sidewalk past the brewery and nearly rounded the corner.

The main event kicked off at 11:00am. Creature Comforts went all out to make this bottle release something to remember. Instrumental music, candles and custom stemware set a very classy atmosphere. Five hundred specially made truffles from Condor Chocolates were prepared using portions of the Willet Distillery bourbon infused maple syrup and offered during the event. The brewery also offered special taps to include variations of their year rounds like Athena Berliner Weisse brewed with passion fruit and guava, seasonal favorites like Tritonia Gose (an Athena based brew with the addition of coriander and cucumbers), a special appearance by a keg of 2014 Southerly Love (a collaboration with 7venth Sun Brewery in Florida brewed with lactobacillus and brettanomyces) and the masterpiece itself, See the Stars. Also on tap was See The Sunrise, a variant of See The Stars with the addition of coffee from Athens,GA based coffee shop, 1000 Faces.

I managed to get my hands on only one bottle of See The Stars, and felt fortunate for having done so. I invited a few friends over and poured See The Stars into 4 glasses and we tasted. The experience was magnificent. The beer poured black and dark like a moonless night with sweet scents of bourbon and vanilla. The head was a dark khaki color and small, even using a hard pour technique. The midnight black stout laid like a smooth and silky blanket on the tongue. Tastes of bourbon, dark chocolate, dates and subtle notes of vanilla and maple were evident with little to no carbonation present. The aftertaste coated the mouth with the flavor of bourbon–chocolate truffles. I expected something heavy and overpowering based on the aroma and color of the stout. Instead, I was surprised to find it more welcoming and lighter than expected. This was the most drinkable “sipping” beer I have had.

We had some left in the bottle when we were finished, so I put a wine stopper on top and set it back in the fridge. The next night I pulled it back out and tried it again. See The Stars was still glimmering with luxurious flavors despite having been open for more than 24 hours at that point. This captured my curiosity and prompted me to put what was still left in the bottle back in the fridge again for a third night. Again, I took it out and poured a very small glass and still, See The Stars remained delicious and drinkable. I am very impressed by the longevity of See The Stars and only wish I could buy more. 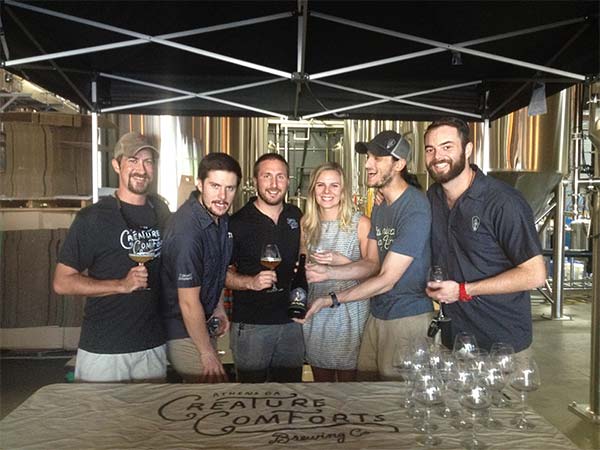 For more photos or information about the event, visit Creature Comforts’ website.