The sun shined brightly on a Sunday afternoon as my girlfriend and I cruised lazily the back streets of Chicago. Through some force of nature, we happened upon the Goose Island Fulton Taproom. Suddenly, those same forces guided us to a parking spot. As we opened the door, we were greeted by kind, soft and welcoming faces. Looking around inside, our DIY intuitions were stirred by the hand-made, Chicago-themed woodwork covering the walls. My eyes were drawn to a wooden barrel repurposed into a water dispenser. What a brilliant idea!

The room was packed. being so early in the afternoon. By some chance, a couple of spots at the bar opened up for us. Glancing across each draft handle, I noticed an elegant golden font displaying the word, Gillian, printed on top of a red background. Recently, my tastes have soured, so I couldn’t pass up the opportunity to taste another of Goose Island’s Sour Sisters. Gillian, is a Belgian farmhouse-style, wild Saison with fresh strawberries, white pepper and local honey.
I kindly asked the bartender for a pour. She grabbed a 12 oz tulip, angled it and pulled the tap. A hazy, golden straw color with a hint of red filled the tulip. Just the slightest head rimmed the glass. A symphony of bubbles rose as I admired the beautiful strawberry blond hue. 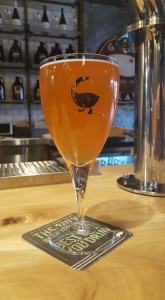 I took in a deep breath of the aroma: a fruity, grassy, and funky scent delighted my senses. This beer had all the makings of a great one, but the true test was to come, the taste. I tipped the glass back, inhaled, and took a nice sized swig.

Initially, I was hit with that funky sour taste, a very pleasant pucker. Followed by the earthiness reminiscent of a Saison and a subtle spiciness of pepper. At the tail end, the fruitiness of the strawberries and slight sweetness of the honey lingered on the palate. There was such a wonderful mouthfeel. It was perfectly carbonated, ending with a crisp clean finish. From the first taste, I knew this would be the beer to write my first showcase about. I proclaimed my interest to an employee, Aaron, who was beyond helpful, put me in contact with, Megan, their brand guru. She then forwarded me to Keith Gabbett.

Goose Island’s head brewer, Keith Gabbett, developed Gillian in 2009. Keith expressed with me his beautiful sensory experience of his creation. Upon tasting his beer, he is transposed to a beautiful sunny day, deep in the forest. The sunlight shining through the gaps in the woods. The wind dancing across the tops of the trees. He approaches a glade, where his sight adjusts to the full sun and the scent of nature fills his lungs. Opening his eyes, there is a field of strawberries as far as one could see. He picks a handful and savors each one. The flavors of the berry tantalize him. Sweet, tart, fresh and delicious. 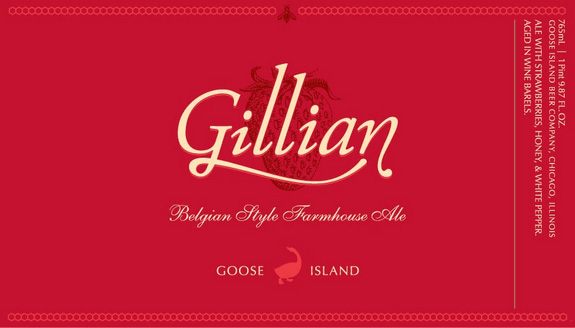 Thank you to the wonderful people at Goose Island, Aaron and Megan, who made the interview with Keith a possibility. What was supposed to be a phone interview turned into a conversation about craft beer, recent trends and plenty of silliness. Jokes aside, Keith’s commitment was apparent from the beginning. Gillian, one of the most laborious beers to produce, took some time for the brass at Goose Island to approve. Though once they tasted the final product, not much else was needed. The process starts in the primary with fresh strawberries locally sourced from Michigan. A month later, honey, from Illinois, is mixed in. Another month passes and another mix to make sure all the honey is dissolved throughout. Finally, after 3-6 months, it’s ready. This dedication shines through in the final product.

Why is Gillian named Gillian? When I was told, I knew it was a sign. The inner nerd in me was jumping for joy when I found out the original name for this brew was none other than, Scully. Yes, the strawberry blond that wanted to believe in the supernatural, was once a hostess at the Goose Island taproom during her studies at DePaul University. It was only becoming that such an elegant and well-balanced beer be named after such a great actress.

Funky and fresh, yet sweet and peppery this sour beer is an incredible one. Although on the pricier end, for those of you that appreciate sours and a great beer you will not be disappointed. The truth is out there, and it is inside a bottle labeled, Gillian.