We kick things off this Monday in a BIG way, with a preview of the Big Beers Route. These beers are all 9% or higher and will knock you on your kiester. We’re showcasing the best that we’ve tried as well as those we’re most intrigued about, and our Big Beers route definitely brings out some serious whales in the form of barrel-aged wonders, Barleywines, Braggots, Strong Ales and more. It’s not recommended to try all of these, especially not during one session. Accordingly as always, please be responsible with your consumption.

Therapy Sessions – A huge stout with the addition of Coffee, Chocolate and Macadamia Nuts to create a sweet, but balance, full bodied beer. 15.5%

Utopias – Each release is a blend of batches, some having been aged up to 16 years in the barrel room of our Boston Brewery, in a variety of woods. We aged a portion of the beer in hand-selected, single-use bourbon casks from the award-winning Buffalo Trace Distillery. 27%

Whiskey Barrel Stout – This twist on the classic style starts with several types of malted barley, rye, oats and wheat. Robust flavors of vanilla, espresso, whiskey, chocolate and roasted grain are balanced by hints of date and plum, with just enough hops to round it all out. – 11.8%

Manhattan Barrel Vastness of Space – 14 months ago we were fortunate to procure these High West Whiskey Barrels that further aged the same rye whiskey in addition to vermouth & bitters to form a barrel aged Manhattan cocktail. We filled these barrels with our traditional Imperial Stout. 11.5%

Snowed In Mocha – This bourbon barrel-aged Imperial Oatmeal Stout is taken to a whole new level by adding chocolate and coffee. Rich and complex, this beer is a prime candidate for extended aging. 13.2%

KBS – What we’ve got here is an imperial stout brewed with a massive amount of coffee and chocolates, then cave-aged in oak bourbon barrels for an entire year to make sure wonderful bourbon undertones come through in the finish. 11.8%

The Rusty Nail – The Rusty Nail begins life as The First Nail, an oatmeal stout of epic proportions with brewer’s licorice, smoked barley, and pale malt and is then aged on cinnamon bark. She becomes The Rusty Nail after spending 15 months in 12-year old bourbon barrels. 12.7%

Raspberry Eisbock – After a very very long boil, followed by a freezing and aging period, fresh raspberries and raspberry juice is infused into this intense lager, bringing about bright berry notes with a hint of chocolate, like a chocolate truffle. Found in the MI Guild section. 15.5%

Monster’s Park aged in Bourbon Barrels w/ Vanilla – We took this batch of Monster’s Park to a new tier of decadence by loading it up with a whole bunch of delicious vanilla beans, which meld magnificently with the barrel character and giant, roasty profile to create a uniquely majestic beer experience. 14.6%

Monsters’ Park Aged in Spanish Brandy Barrels – This is Monsters’ Park, our hulking, cantankerous imperial stout, aged in Spanish brandy barrels, which begin their life as sherry casks. The fruit-forward barrel character is immediately evident on the nose and only grows more intense in the flavor. 13.3%

Mélange A Trois – Mélange A Trois begins with a wonderfully big Strong Belgian-Style Blonde Ale and moves into the extraordinary category through an additional 6 month French Oak Chardonnay Wine Barrel maturation. The essence of Chardonnay permeates while a subtle sweetness. 11.3%

Dragon’s Milk – A stout with roasty malt character intermingled with deep vanilla tones, all dancing in an oak bath. 11%

Effing Teamwork Stout Collab w/ Avery Brewing – On-site blended beer only for GABF! One white stout from Odell’s and one dark stout from Avery come together in synergistic harmony as our two teams combine to create a big, delicious stout with notes of coffee, oak, and bourbon. 11%

Barrel-Aged Ten Fidy – Aged through four seasons & from a blend of the top Bourbons around, this Ten Fidy has morphed into a monster of cranked up flavor. Espresso, burnt sugar, rich chocolate, caramel notes are now driving alongside the vanilla, oak & bourbon from the barrel. 12.9%

No Rules – This 15% Vietnamese Imperial Porter was made with coconut & turbinado sugar then laid down & aged in bourbon barrels for several months. 15%

Working Mom – Our Winter Woman Imperial Brown aged in Old Forester barrels for 9 months. Wonderfully complex notes of bourbon married with chocolate, toffee, fruit & vanilla with a lingering hop bitterness & alcohol warmth that you would expect from a beer this big! 11%

Vanilla Absentium – Aged in bourbon barrels that were then used by a spice company to age a batch of its vanilla extract. A smooth imperial stout with deliciously inviting flavor notes. No vanilla was harmed in the making of this beer. 13.9%

One Bad D – One Bad G is a Strong Ale malt showcase, with flavors of dark chocolate and fruit, rounded out by vanilla and oak from bourbon barrel-aging. 10.9%

Mornin’ Delight – A huge Imperial Stout with an explosive espresso aroma followed by strong notes of maple syrup and vanilla. 12%

Grow Old With You – English Barleywine aged in bourbon barrels. 13%

Snake Cake – Our snake eyes imperial stout aged in bourbon barrels with the vanilla beans and cocoa nibs added, creating a rich beer with a striking resemblance to chocolate cake. 13%

Sunday Morning Stout – Aromas of roasted coffee and bourbon awaken your senses while their flavors blend with hints of chocolate, roasted malt, vanilla and caramel. 12.7% 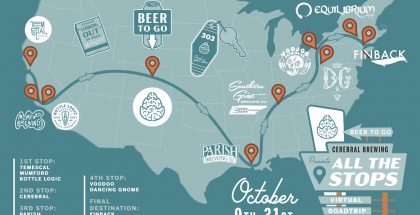