While some craft beer drinkers tend to shy away from the “hazy IPA” bandwagon, I whole heartedly embrace it. I remember traveling all the way to Vermont just to get my hands on a can of Heady Topper, and it forever changed my expectations of what craft beer can be. Milkshake IPA’s are the next hazy IPA trend in the American craft beer industry, and with that trend has come some unique, creative, interpretations of this new style.

Fruit flavors change frequently, but I was able to get my hands on the last 4-pack at Bitter Pops of its milkshake style IPA brewed with apricots, peaches, real Madagascar vanilla, and lactose sugar. It did not disappoint. As expected, this milkshake-style IPA pours a thick, creamy, burnt orange color, yet not as much “haze” as you might come to expect.

However, don’t let this beer’s appearance fool you.

The real Madagascar vanilla beans aromatic scent dominates the beer’s profile on the nose, easily overpowering the fruit flavors that you no doubt instantly taste in your first sip. The stronger gravity (8.5% ABV) is not noticeable in the signature flavors of lactose and fruit you’d come to expect from the style. The sweet fruit flavors of apricot and peach linger on the tongue long after you’ve swirled the beer around your mouth and swallowed it. This is the perfect dessert beer for a warm Chicago day that pairs perfectly with a slice of fruit pie from Bang Bang Pie.

Fruit pie in a glass is here, Chicago. Cheers! 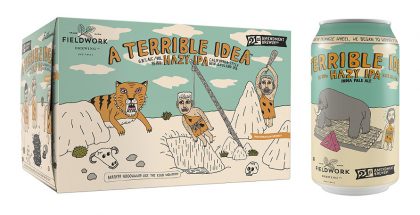