Growing any business is difficult, but building an entirely new platform is even more challenging. In the last four years, CANarchy has experienced its share of change (and a lot of work behind the scenes) to ensure the brand accurately portrays what the Collective is trying to accomplish.

“You make a lot of mistakes, but that’s how you learn,” said Aaron Baker, marketing manager, CANarchy Craft Brewery Collective. “It’s a completely new platform, which is challenging but there have been so many benefits we’ve experienced over the last few years and we’re starting to see more of that as we get further in the maturity of the Collective.”

Telling the CANarchy story to consumers takes a subtle, intimate approach that lets the individual breweries shine while the Collective takes a back seat. Rather than shouting from the rooftops, the Collective is spreading awareness through those who have direct interaction with the consumer.

“When we educate people about the brand, it’s mostly on a one-on-one basis, having our bartenders and servers tell the story about the Collective and everything that goes into it,” Baker said. “We don’t want to be over-the-top with the CANarchy brand. We want to educate people and make sure they understand the benefits for them, which is quality and access to great beer.”

CANarchy strives for its breweries to maintain their authenticity and their relationships with their beer drinkers. In doing so, they hope to prevent the question: “Why is Jai Alai on tap in Brevard, North Carolina or Denver, Colorado? What’s that about?”

Baker said that the main focus of the CANarchy is not to create some new brand that’s the first thing people recognize—it’s to make the best beer possible and get it to as many people as possible.

With such a passionate fan base as the craft beer industry, some pushback is unavoidable. But amid ongoing public perception, CANarchy sticks to their focus: the quality of the beer and the access they can provide to the consumer. Once that story is told, people get it.

The story of the bringing together all of these like-minded breweries is now on full display. Last month, CANarchy opened the doors to their first brick-and-mortar location – the Collaboratory – in Asheville, NC.

The Collaboratory is a physical manifestation of the Collective. It’s a space for, well, collaboration and experimentation between breweries in the Collective and leading breweries throughout western North Carolina, the U.S. and the world.

Wayne Wambles, brewmaster for the Collaboratory and also of Cigar City Brewing, brews two to four beers per week. On the food side of things, Head Chef Polo Alonso plans to incorporate distinctive brews into the menu to create an unmatched culinary experience.

Opening a physical space in North Carolina was always in the back of CANarchy’s mind. Oskar Blues Brewery founder Dale Katechis holds a long track record in the restaurant industry, but the right opportunity never presented itself. That was until Mike Healy, owner of Lexington Avenue Brewery, was looking for a change, leaving the space in the hands of CANarchy.

Once the location was secured, CANarchy began to focus on the unique aspects of this space. Rather than create an Oskar Blues restaurant or a Cigar City taproom, CANarchy became hyped on the idea of it being a new concept—a concept that goes back to quality and access. It’s a concept of breweries working together with the mission to make the best beer and get it to people who weren’t able to get it before.

“It’s the next logical extension of what CANarchy has become,” Baker said. “It’s a way for people to live the CANarchy story by visiting the space. I think they come away with a greater understanding of what it’s all about.”

A Welcomed Challenge in Asheville

With a multitude of great craft beer cities in the country, CANarchy decided to set up shop in Asheville. CANarchy sees the location as a great challenge and testing ground for new flavors and the innovative things they want to do while also teaching people about the Collective. With such a wealth of craft beer knowledge, it will be easy for the city to get excited about partnerships happening at the Collaboratory as well.

CANarchy made significant investments to upgrade the brewing equipment of the Collaboratory—upgrades you wouldn’t normally see in a brewpub of its size. The goal was to duplicate the equipment of the Collective’s breweries across the country but on much a smaller scale.

“If we have the same equipment, we can produce the same flavors and keep the quality where it needs to be,” Baker said. “But also, we’re set up to ramp up production on something if it really takes off.”

Having a separate space where the Collective can focus on new things represents a unique challenge and significant benefit to the CANarchy brand. It provides them with a space to slow down and have conversations with people outside of a larger brewery.

It also provides a great setting to represent all seven breweries and a way to tell the story of what CANarchy is. An example? One of the best-selling beers in the pub is Three Weavers Seafarer Kolsch, a beer that has never been distributed outside of California.

“That is a great example of how quality is king,” Baker said. “People want craft, but they want good beer. The beer being from LA is secondary to it being a damn good beer. That’s what’s exciting.”

The Collaboratory also holds potential for new events with unique combinations of culture, food, music and art. While these concepts are currently being fleshed out, beer will be central but there will be a whole host of other things to come.

In the future, the Collaboratory also hopes its work extends beyond other breweries to include musicians, artists, nonprofits, chefs, community groups and really anyone who wants to get their hands dirty and make a beer.

The Core of the Collective

The doors are open, the bar is full and the beer is certainly brewing at the Collaboratory. On the heels of the opening of their first physical space, CANarchy sees their latest development as a direct correlation to the origin of the brand, when Oskar Blues Brewery first partnered up with Perrin Brewing Company.

“Dale (Katechis) used to talk about it as the next logical step in collaboration between breweries,” Baker said. “Not only making a beer together, but learning from each other to discover what else can we do together.”

Simply put, the Collaboratory embodies that collaboration is the key to craft beer.

Additional locations are on the minds of the Collective. However, like the Collaboratory, it all hinges on the right opportunity and location.

In true disruptive form, the Collective is always out there, looking and accepting new ideas and thoughts. Later this fall, the CANarchy plans to distribute their second mix pack, featuring IPAs from across the Collective.

The Collective also holds ongoing conversations with breweries looking to become its latest member. They evaluate each situation on a case-by-case basis with a purposeful approach to ensure it’s the right fit. Now that the Collective is well established, they have the luxury of being selective when it comes to new members.

CANarchy Craft Brewery Collective is always looking at the next thing in terms of what drinkers want. They continue applying what they know about making beer to a new product, service or experience to bring the quality and access that only the Collective can provide. 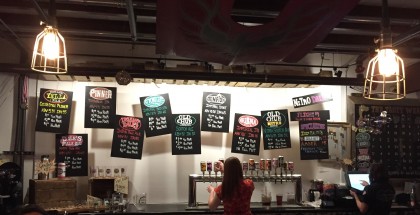